Although he had been in post as the new National Angling Advisory Group (NAAG) chair since March 2017, it was several months before we managed to catch up with Ian Trayer and find out what makes the famous professor tick. This is Ian’s story.

I’m a retired academic with a rather boring career; I left my home in Grimsby and went to the University of Birmingham in 1960 at the age of 18 to read biochemistry and retired 43 years later as a Professor Emeritus of Biochemistry.

For the last 10 years of employment I was Head of Biochemistry and then Biosciences after we merged with Biological Sciences. I did venture away from Birmingham for four years in the late 1960s, taking up a post at Duke University in North Carolina, discovering the joys of big mouth bass fishing and, more enduringly, fishing for billfish in the Atlantic off the Outer Banks.

I’ve had and have various (unpaid!) jobs since I retired. Most of my time, when not fishing, is spent at the Bittell reservoir system in Barnt Green, south of Birmingham. These reservoirs supply water to the Worcester & Birmingham Canal and the source of the River Arrow. The estate comprises three reservoirs and two smaller pools and adjoining land operated by Barnt Green Waters Ltd (BGWL), a non-profit making registered public company. Most of the estate is on a long-term lease from the Canal & River Trust; we are into our second 99-year lease. I have been chairman of the company and am now a director with responsibility for water quality.

About 90% of the estate is a SSSI. The funds to run the estate derive from the sailing club and fishing club that operate under the BGWL umbrella. I’m also fishery officer of the fishing club. The large 80-acre Upper Bittell (UB) reservoir and one of the pools are coarse fisheries and the rest are fly fishing trout-only waters. We were classified by Natural England (NE) as a failing SSSI when I and a colleague started to take an interest in the ecology and water quality of the estate. We’ve made considerable progress in rectifying this but have a way to go. This work has involved much interaction with ecologists from NE, the Trust and the Environment Agency.

Although I had a good working relationship with the Trust’s ecologists, I only came across John Ellis and Carl Nicholls when they discovered I was about to have the second biggest reservoir (Lower Bittell, 23 acres) netted and sell the fish to the netter in recompense. Spirited debate ensued as I could not believe that the Trust owned the fish, no matter who bought them, if they owned the fishery bed. Fish Legal confirmed my ignorance of these matters. We soon put that aside and not long after I decided to apply for NAAG, replacing David Kent as chairman. We’re now working with the fisheries team to reinstate the Upper Bittell fishery following its recent de-watering for valve repair work. The eel rescue was especially onerous. 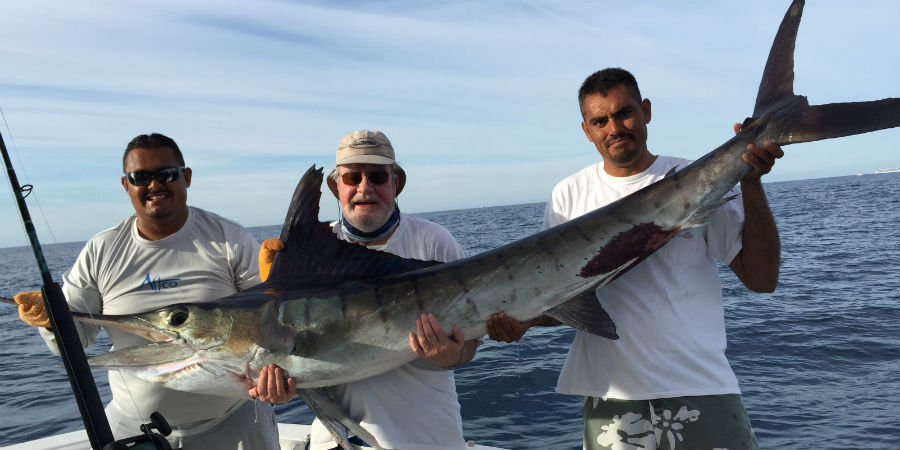 My fishing year starts in February with a trip to the tropics in pursuit of billfish. For the last few years I have travelled to the Pacific coast of Central America in search of a Black Marlin, the only species of marlin I’ve yet to catch. Other than this obsession, I’ve rather catholic tastes in fishing. I fly fish for trout all year around on Bittell lakes and in late summer for salmon in Ireland or Scotland. I like carp fishing for several days at a time in the warmer months, mainly in England, but also France. In the late summer/autumn with friends, we like to fish the midland rivers (and into Wales) for barbel, chub and grayling and for pike in the winter.

At seven or eight years old I became fascinated with the thoughts of fishing, after watching something on the Pathe News at the ‘tanner crush’ Saturday morning cinema (if you’re old enough, you’ll remember!). I kept pestering my father, a non-angler, to take me. Enter Billy Dale, a distant relative of Dad’s, who soon became my ‘Uncle’ Billy. Billy took me first to the Louth Canal at Tetney Lock where I caught my first fish, a roach and I was hooked for life. I’d go with him whenever I could over the next three to four years. We fished the Witham, one of his favourites and the Ancholme. He entered me into the Grimsby Juniors competition where I came third. It soon became apparent, even at such a tender age, that Uncle Billy was held in high regard by fellow anglers. I was told he represented Grimsby in the All England competitions, although I was not sure what that meant at the time.

John Essex to the rescue

On hearing of a possible national link, John Ellis suggested I contact the Trust’s volunteer historian, John Essex. Without checking, John confidently recalled that a Mr Dale had once captained the Grimsby team. Two hours later, John confirmed that J C Dale fished for Grimsby from 1946 until 1958 with just one gap in 1957. Furthermore, Grimsby and District Angling Association were renowned as a top match team. Captained for many years by J Randy Smalley, they won the All England in 1927 on the Middle Level Drain and the 1973 Witham Division One National. 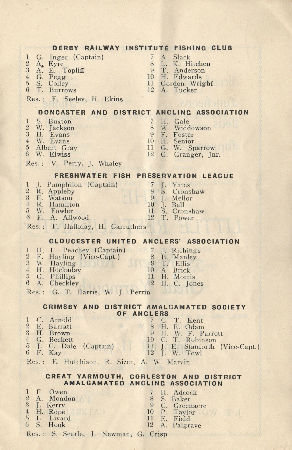 As I got older and with all my own gear, I used to travel further afield by train with a friend (believe it or not called Alan Tench), usually down towards Boston. The River Steeping at Wainfleet and the River Glen (single grain of hemp on a 20 hook for big roach!) were favourites of ours. Dad went to work for Consolidated Fisheries, a trawler company, which had an active fishing club that held Sunday matches throughout the summer. A bus picked us up at 7.30 am at the top of the street and off we went to a wide variety of venues. I particularly remember the big drains around Boston such as the Sibsey Trader and South 40 Foot.

My earlier fishing days on the Lincolnshire drains and rivers are similar to the canal fishing that many NAAG members are involved with. It’s certainly brought back memories of my formative years with Uncle Billy.

I have been both impressed and astonished by my first year as chair of NAAG. I’m impressed by the dedication and enthusiasm of the members of the Group. I would be very surprised if there was a more committed advisory group in the Trust. I’m astonished that the fisheries and angling team is so small for all the work that must be done; and, if I’m honest, they've not quite yet got all the necessary support that they appear to me to need. We must try as much as we can to help fisheries come out of the re-organisation in a better place.