My fishing hobby first started with me asking my stepdad if he would take me fishing with him. I’d always wanted to try the sport but didn’t think he would want to take me because I’m a girl and I wasn’t sure he would think it was OK for girls to fish. Ha-ha. As it turned out, he jumped at the chance to take me and quickly signed me up for a Let’s Fish! introductory event run by Stoke on Trent Angling Society.

When we arrived at the Middleport canal, I received a warm welcome from John Davey and his team of coaches. I was nervous. I could just see a load of tackle lining the bank of the canal and thinking to myself “how am I meant to use that stuff to catch a fish?”.

I was quickly assigned a coach who talked me through everything, and I was doing the fishing by myself in no time at all. There I was, sitting on a box, holding a small pole, and intently watching my float, hoping something might happen.

Suddenly, my float completely disappeared under the water and my coach told me to lift the pole up and there it was, I had hooked and soon landed my first ever fish, a small roach.

That was the moment that I realised that I had caught the fishing bug. By the end of that one hour Let’s Fish! introductory event, I’d grown in confidence landing several fish and was presented with a My First Fish certificate for all my hard work. 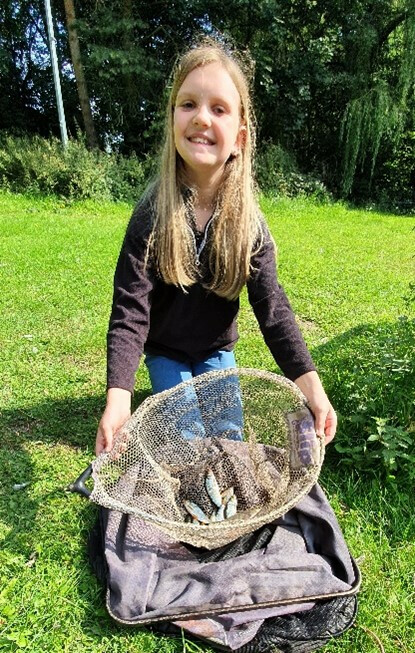 On the drive home, I asked my stepdad when he could take me again. I was keen to learn more about this new sport I had just discovered. A few days later I went on a local pool with some maggots as bait and a 6m take apart pole. My stepdad was talking me through what to do, plumbing the depth, setting the float etc.

I was happily catching small roach and perch and suddenly from nowhere, I saw my elastic shoot out of the end of my pole. I knew this was a big one. My stepdad told me to calm down and talked me through how to land that big fish. The mission was accomplished as I landed my first carp. It was exactly 3lb in weight.

I loved fishing and started to go at every opportunity I could. I signed up to the national celebration of young people and fishing, not knowing what the event was all about. I thought it would be similar to a Let's Fish! introductory event, but when we arrived at peg 43 not far from bridge 51, I saw about 120 other juniors lined up all along the Shropshire Union canal.

I began to get nervous. But once the whistle sounded and I got started, my nerves soon disappeared. I enjoyed catching good numbers of small fish on my three metre line with maggots and pinkies as bait. We had to fish no more than three metres from the bank for the first 90 minutes. That’s an event rule designed to give every kid an equal chance for the first part of the celebration, which when you think about it is a fantastic thing.

Other kids were landing fish too, everyone was enjoying it whilst trying their hardest for the next fish. After 90 minutes I started fishing at 10m with ground bait and chopped worm, this started to produce a bit of a bigger stamp of fish. In the last 15 minutes of the event and the float slowly dipped. I hooked and landed a big elastic stretching common bream of perhaps two pounds in weight.

As the whistle went to signal end of the fishing I turned to my stepdad who had been patiently sitting behind me a few metres away, “have I done ok?”. He smiled and nodded. I couldn’t have been happier. He reckoned that I probably had about 6lbs in total in my keepnet. I didn’t really understand what that all meant then, I was just enjoying catching fish and the atmosphere of the occasion.

The scales arrived at my peg along with a camera crew broadcasting on Facebook live. This was the moment, the man reading the Reuben Heaton weigh in scales, who I later found out was Simon Mottram, announced three kilo’s 100 grams. I didn’t know where I had come or how I had done compared to all the other anglers for there was dozens more people yet to weigh in but I had thoroughly enjoyed myself so I was very happy. 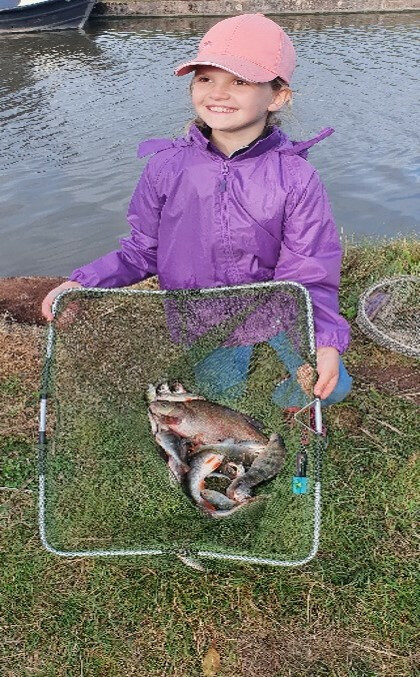 After packing away and making sure to pick up the peg card number, we headed off to Cheswardine village hall which was a hubbub of activity and noise. At the presentation I received a bag of ground bait, a GUGGS gudgeon mug (my favourite fish is a gudgeon) and a £10 Leigh Tackle & Bait voucher.

John Ellis was steadily losing his voice reading out all the kids names and final finishing places. I couldn’t believe it! I had come 5th out of 120 and was the top finishing female angler. I was so pleased. It took ages to sink in.

A couple of weeks after the national celebration, I received an email asking if I’d like to fish in the Let’s Fish! end of year event. I gladly accepted and was selected as the captain of the ‘Hot Prospects’ junior team. Now I was very nervous indeed but also excited. Here I was, little Poppy Bishop fishing against some of the best juniors in the whole country.

When we arrived on that cold late October morning, I decided to treat it as any other day out fishing. I set up, started fishing and the nerves went. The fishing turned out to be much more of a challenge than the September event but I finished about half way in the section and as you always do, took some lessons to store away for a future occasion. At all these Let’s Fish! events I’ve met some great people along the way and made many friends. 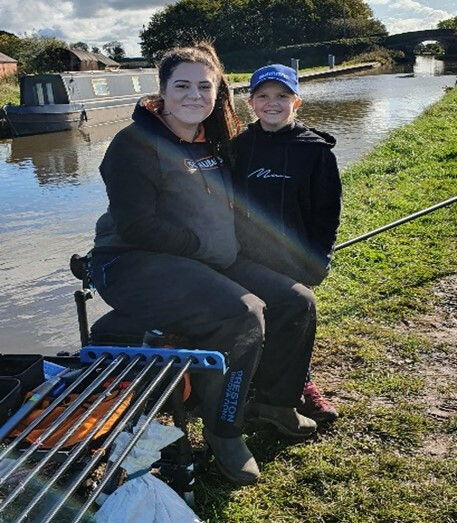 I have been fishing for about nine months now and have taken over a chunk of my parent’s garage with all of my kit. I have fished in quite a few junior events. Some I’ve done really well in and some not so well but every time I go fishing, I always learn something new. That fishing bug just gets bigger and bigger.

I represent Stoke on Trent Angling Society team in the National Celebration and participate in their junior club matches. I have recently had a trial for another team, Monster Dips and Baits, as well so I can now fish in the Angling Trust Junior Commercial Nationals this year. I’ve made the team so I can’t wait to start with them and learn lots of new tips and skills.

My plan for the future; to continue to progress and learn all I can in the world of fishing. I would like to say thank you to everyone that has helped me along on my journey so far and I’ll see you all out on the bank some time.

If you are reading this and think you might like to try fishing I would recommend starting off at a Let’s Fish! introductory event. They are free and who knows, you might find you enjoy fishing as much as me.