This guest article is brought to you, courtesy of Sheffield’s Jim Baxter. Jim touches on the angling achievements of three of the greatest ever float anglers.

The Rising Antenna by Jim Baxter

Life and fishing before commercials

Match fishing has changed so dramatically in recent years with the advent of ‘commercial fisheries’ and regular 100lb catches, that youngsters can only imagine how comparatively difficult fishing used to be on our canals, rivers and natural still-waters. When I fished the Rivers Trent and Witham 30 years ago, 10lb was a good weight on the former and very often a winning weight on the latter and was often enough to beat over 200 competitors.

On the frostier days of winter especially, that 10lb could be totally out of reach. As little as 4lb could easily win the match and skilful anglers would be scratching around for one fish in the hardest sections. But we did not know any different then; we saw it as the ultimate test of angling skill and loved the atmosphere of those big matches, no matter how difficult the test.

Looking for an edge – wisdom of Ivan 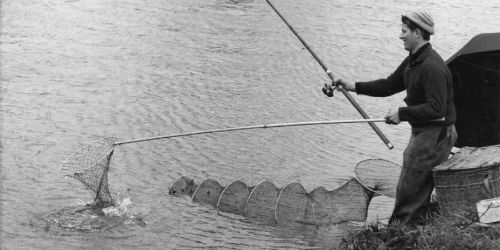 The great Ivan Marks, Leicester’s charismatic and popular ‘People’s Champion’, used to say how useful it could be to do something differently from the majority to get an edge in these big matches. He wrote two articles in Angling Times entitled ‘Don’t copy the cracks – stick to your own style’, and ‘You must break from the norm’. In the second article he described how if everyone loose feeds, sometimes slavishly, his instincts were to break the sequence and use groundbait. This was not because it was necessarily a better way, but because it meant that he’d be doing something differently to almost everyone else. To quote Ivan ‘In a Trent contest of 300, if only ten per cent use groundbait and if my feeding style is right on the day, I have only 29 anglers to beat, so I’ve got the odds in my favour’.

I’d now like to give examples of two other former star anglers who did it differently to everyone else and succeeded, and another who is still doing so and winning. Nottingham’s Johnny Moult was to many an enigma, an angler whose middle name should have been ‘unorthodox’, and someone who developed quirkiness into a fine art. He was one of the first to discover that a bottom-only attached porcupine – a waggler forerunner - could beat a stick float for catching roach way back in the 1950s and 1960s. He pioneered the centre-pin reel and loose float method on the Trent and also ventured to the Severn to point the Birmingham Anglers in the right direction.

King of the tare

But ‘Moulty’ as he was known, was much more than simply a pioneer of the waggler. He would begin a Trent match by fishing maggot or pinkies, then wean the fish onto caster and groundbait – his main plan of attack. But on a warm summer day when all was going well, he’d go up a gear and switch to tares. There have been many anglers who have had the measure of John on stick float and caster, notably two-time Trent record holder, Kevin Ashurst, but none has exploited the tare as a hookbait on the Trent as superbly as John did.

Johnny Moult’s swansong came in the 1980 Division 1 Trent National when he came second in his 80-peg section, with only his team mate John Dean going one better to win his. They spearheaded the Nottingham Anglers Federation team of 12 to a winning record points score of 883. John Moult usually turned up late to fish matches and his tackle was notoriously shabby. His floats had paint falling off them and his ancient wooden seat box had a hole in one side plugged with a towel! But he never fished quite like anyone else and, by the Ivan Marks theory, when his method worked he had narrowed down the opposition almost to zero. 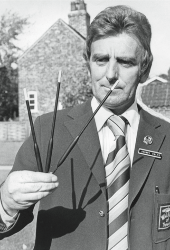 My next top angler is also from Nottingham and was also called John – the late John Rolfe. If he’d ever had a personalised car number plate it should have read ‘Peacock 1’, for John was the first to enjoy a spectacular season of match wins on what we now call a waggler float made from peacock. The year was 1971 when ‘Rolfey’, as known to his colleagues, took the Trent apart with 14 big open wins and a few club wins for good measure.

At the start of that decade John took to the early peacock floats before they were officially termed wagglers. He had some made by a friend and local float-maker, Gerry Woodcock, but insisted on calling them ‘swingers’. Well, we had just experienced the swinging sixties. These floats were bigger than most anglers were using at the time – up to over two Swan shot capacity – and they allowed John to cast beyond his rivals. Whatever the wind direction, downstream or not, John was able to fish in full control, well out into the Trent and, for a whole year at least, had that part of the river to himself. Others eventually got the message and caught him up and John’s great advantage faded. But for his golden run he was doing it differently to everyone and almost unbeatable from a good draw.

My final angler is Derek Skinner of Spilsby. Derek has made a short film that is showing on YouTube and worth any angler seeing, who fancies trying bread punch as a bait on a canal, drain or slow river. Bread punch, as all experienced anglers know, can be a superb winter roach bait when temperatures plummet. Derek, like many bread anglers, will grind down old bread to a fine powder in a liquidiser to use as the feed medium – popularly known as ‘licky’. He’ll also use a fresh piece of bread punched out as a tiny round pellet for hookbait. Sometimes good roach will fall to a piece of bread no bigger than the size of a saccharin tablet. This is standard practice. But what Derek does differently to most, and I believe gives him his vital edge, is his choice of float.

Floats with an edge

Derek’s float is a homemade peacock quill with a cane bristle up top and a wire stem at the base. He likes to fish them with a whip, line to hand. On the face of it his floats could be called drab, not what anyone might pick out of a tackle dealer’s float stand. But unlike some pole wagglers, the wire stem cuts through the water cleanly on the strike and they are less inclined to dive than the tapered, all-balsa type of pole waggler. Any diving of the float on the strike gives a delayed contact to the fish. Derek caught upwards of 300 fish in making his video, so missed bites were kept to a minimum, and he has often beat the best of Fenland and beyond in open matches on the Old Nene at March and on his local River Steeping and Boston drains.

As a final thought, Ivan’s theory will still work today, whether your target for the fishery is 10lb or 100lb. The message for all aspiring young anglers, matchmen or otherwise is clear: don’t follow the pack but try and work something out for yourself that’s different to what all the rest are doing. When it works well – bingo!

You can read more about many top anglers past and present in my new book ‘The Rising Antenna – a waggler man’s journey’ - Jim Baxter.