In praise of the gudgeon (part 2)

The Grand Union Gobio Gatherers Society are a noble group of specimen hunting anglers. You need to have caught a gudgeon of any weight in order to be able to join their ranks.

Then you strive to land a one ounce specimen because that gives you the right to give the fish its own name. For GUGGS members believe that all specimen fish deserve to have their own unique name. In 2016, the name given to 30 grams plus specimens must begin with the letter N. A few 40 grams plus fish are reported annually with the ultimate aim of a 50 gram canal specimen. Fish of this size are rather rare. The best specimen of the year wins the GUGGS Gobel prize. To date, the Society has 464 members and is growing steadily, probably reaching the landmark membership target of over 500 by the end of the current year. This certainly makes GUGGS one of the fastest growing specimen groups in the UK. Find out more about the work of GUGGS.

The lure of the gudgeon

I was talking to John Cheyne of the Lure Anglers Canal Club the other day about species that are occasionally captured on small lures. I was delighted to learn that gudgeon have been caught by this method from time to time. The ruffe is another of the so called mini species that can be caught on a small lure, much more easily than gudgeon which are only occasionally landed. On the subject of ruffe, Stafford based match man, Mark Wilton, landed a four ounce plus specimen in a contest on the Staffs & Worcester a few weeks back. I would not bet against Mark eventually breaking the ruffe record from this venue, for he is convinced that the canal will one day produce an authentic six ounce monster and he aims to be the man to capture it.

Bradford on Avon. The gudgeon town 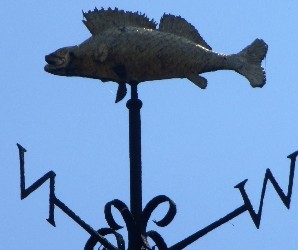 To many, this quaint little Wiltshire town, which dates back to Roman times, is best known for the fact that both the Kennet & Avon Canal and the River Bristol Avon flow through it. For me, these are of relatively minor significance compared to the esteem in which the townsfolk hold the gudgeon. For starters, the town motto is Sub Pisce - Super Flumine, meaning under the fish and over the water. The weather vein is known as the Bradford Gudgeon, the town magazine is called The Gudgeon and the community award, won by local bobby Martin Annetts in 2015, is called the Golden Gudgeon.

There is even a local commemorative beer called the Golden Gudgeon produced by Glastonbury Ales. If this brew had existed in a previous era, it would have been the perfect accompaniment to a gudgeon based meal.

In times gone by gudgeon were an important food source. Countless recipes abound from gudgeon pie to the deep fried version. One source advises to take three or four gudgeons per person, but those not on a weight loss regime would certainly have needed half a dozen or more. It was generally advised that there was little need to remove the scales but it’s essential to get rid of the gills and the internal organs and then wash thoroughly. Take the gutted fish and dip in flour and then egg. Sprinkle with bread crumbs and fry for 3 or 4 minutes to a nice brown colour. Of course, before any reader thinks of trying this (and we would discourage the practice as our rivers are already facing numerous pressures on its fish stocks) you must have appropriate permission both to fish and to take fish.

Canal & River Trust, who own the fish in its canals and reservoirs, certainly don’t permit the removal of any fish from its waterways, other than non-native fish species which, under current legislation, must not be returned to the waterways. 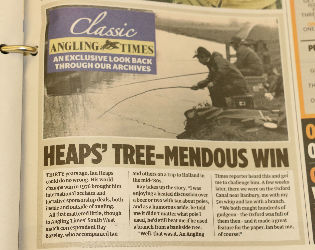 Forget Dick Walkers' record carp, Ivan Marks legendary match wins or Dick Clegg leading England to team glory, the greatest ever story was the article featuring Ian Heaps on the South Oxford Canal. Heapsy shows you don’t need sophisticated angling kit to catch fish, indeed he uses nothing more than a piece of twig from the hedge to triumph in the head to head verses Jim Bazeley.

Is the gudgeon in decline?

Gudgeon, it used to be said, were ubiquitous. Fisheries with only moderate water quality would still support reasonable populations and they are found throughout most sections of river, except for the very fast flowing rocky upper reaches.

Boat traffic hampers the spawning success of some species such as crucian carp and probably tench, but gudgeon positively thrive in heavily trafficked canals. Zander have clearly impacted on gudgeon populations in the canal network since their unauthorised introduction. Phil Smith’s doctorate thesis indicated that they were the first species to virtually disappear once zander became established. However, where zander are not present, gudgeon don’t seem to be as common on canals as they once were, so there is something else at play too.

It could be simply down to the rise of large perch, which were virtually absent in former times, or perhaps some other factor such as climate change, is playing a part. Should any Environment Agency fisheries technical specialists happen to be reading this, then please let me have your thoughts.