This article is brought to us by a very proud Mum, Becky.

Hugo has loved the idea of fishing for as long as I can remember. He had a magnetic fishing game when he was little that he loved (later upgraded to a more high tech battery powered fishing game!). He was always fascinated by any anglers we saw when out walking by our local canal or river. He loved to stop and watch to see if the fishermen were catching anything and, given the chance, would have probably happily stayed watching for ages!

I remember going for a walk with him to the river near our house and he had a homemade fishing rod – a bamboo cane with some string. He stood at the water’s edge, dangling the string in the water and patiently waited for his first catch! He was only three years old! I don’t know where his interest came from. I have never fished before in my life, but it is very clear there is a passion deep inside him.

I first came across the Let’s Fish! sessions back in summer 2019 by chance whilst looking for local things to do. I signed Hugo up straight away. He was so excited to have the chance to learn how to fish properly! We went along to the Grand Union Canal in Wolverton and met Nuala and John Gray. They had a short pole set up for Hugo and he was off!

He caught four fish! Perch and roach. He was super proud! We went home and booked another session straight away, he was hooked! On the second session he caught his first bream.

Since then we have attended Let’s Fish! sessions all over Milton Keynes, the river Nene in Northampton, several fisheries in Northamptonshire and the Grand Union near Leighton Buzzard. We have met and fished with amazing instructors like Nuala, John, Bryan, Ian at Wellingborough, Sue Galloway from the Northampton Nene club, and Mark and Dennis in Leighton Buzzard.

Hugo has been very lucky to have such a wealth of talent to teach him! I’ve even joined him and fished at one session rather than just spectating and we had a little friendly competition. Hugo of course beat me by a long way!

It was Mark from Luton AC who suggested we came along to some Let’s Fish! development sessions designed to help participants prepare for the national celebration. Hugo was happy to fish even more, as was I.

I am so grateful to Mark for his endless generosity of his time, knowledge and fishing kit. He has taught Hugo so much and helped me too. My fishing knowledge has experienced a very steep learning curve in a short space of time, but YouTube has its limits!

Hugo and I have had some eventful fishing adventures on our own, but it’s always been a lot easier when there has been someone there who knows what they are doing! 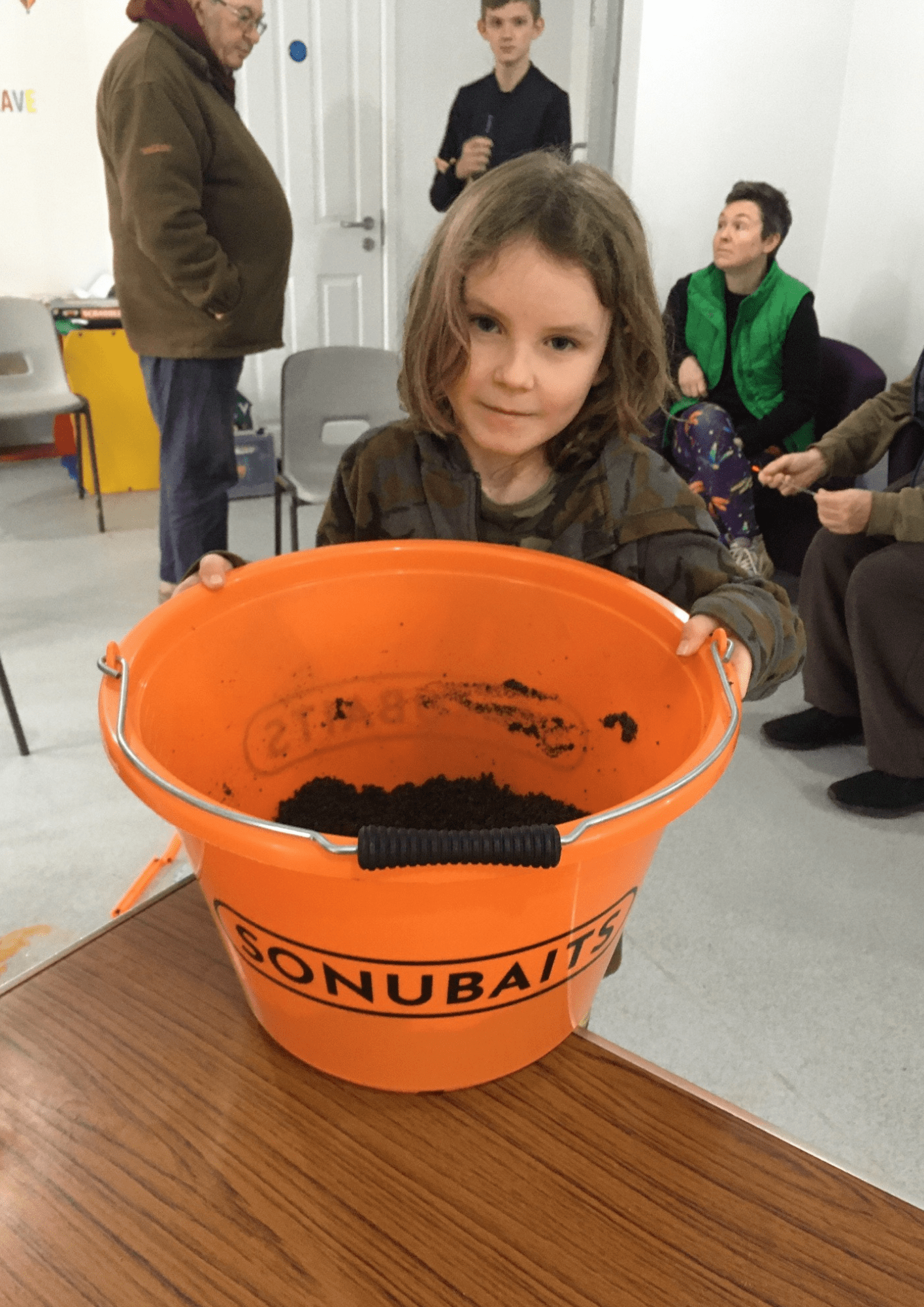 I remember reading an email about the National Celebration of Fishing and Young People shortly after we started fishing, but Hugo was too young to attend at the time. I thought it would be fun when he was old enough, so last year when I got an email about it again, I signed Hugo up! He was a little unsure at first but was won over by the opportunity to fish more and win a prize!

After several more afternoons of fishing practice with Mark, we headed up to sunny Shropshire for the competition. Hugo was excited and not at all nervous. It was a beautiful day and the location was idyllic. The wait for the start of the competition was agonising. Hugo was bouncing with excitement and just wanted to get fishing! 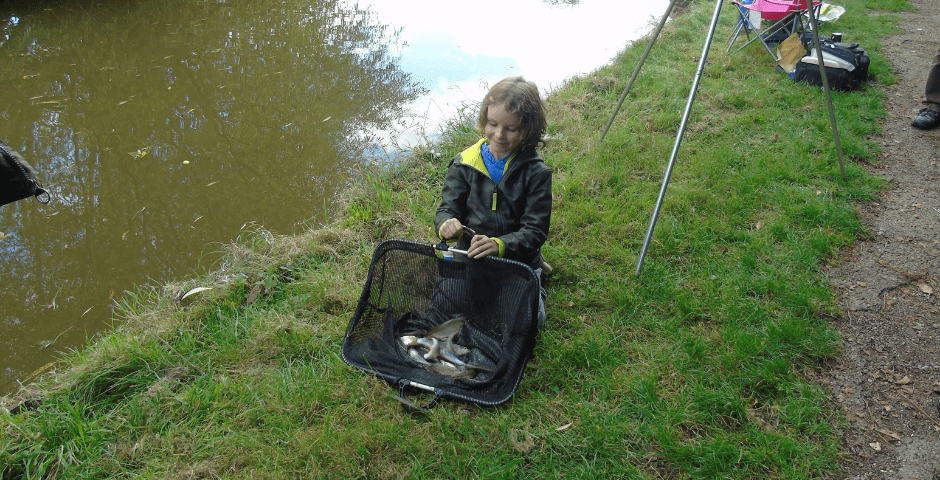 He landed his first fish within a couple of minutes. It was a good start and nice to have something in the net. Shortly after that, he caught his very first gudgeon! By the end of the competition he had caught a good quantity of fish and was feeling very happy. Three hours of concentration is a lot for a seven year old. I am endlessly amazed at his patience and determination. His net was weighed and he had caught 780g! I was so proud of him.

There was a prize giving ceremony after the competition had finished. Hugo came 31st, which is an incredible achievement for his first competition. He came back with armloads of fishing goodies, including the revered gudgeon mug and perch badge!

The National Celebration is a great event that I recommend. There’s a lovely, welcoming atmosphere. Although there is a competitive element, it’s very relaxed with support available for those who need it and I didn’t feel there was any pressure for the cadets. It gives them a taste of what competing is about but in a friendly fun way. There are loads of prizes for everyone to win.

End of year call up

Hugo was lucky enough to return to Shropshire a month later as he was selected to take part in the end of year celebration for the most promising young anglers (cue proud parent!). He was selected to be in the ‘Stars of the future’ team alongside Sam Sellars, Bruce Simpson and Jacob Trull. It was a very different day in terms of the weather. We drove up there in torrential rain, it was colder and the fish were noticeably more absent. However, for the duration of the competition, the sun came out and the same welcoming atmosphere was there again.

Hugo’s team came third pipping the Emerging Prospects team by a single point. Hugo won a trophy which he was ecstatic about. What an end to a brilliant first full fishing year! 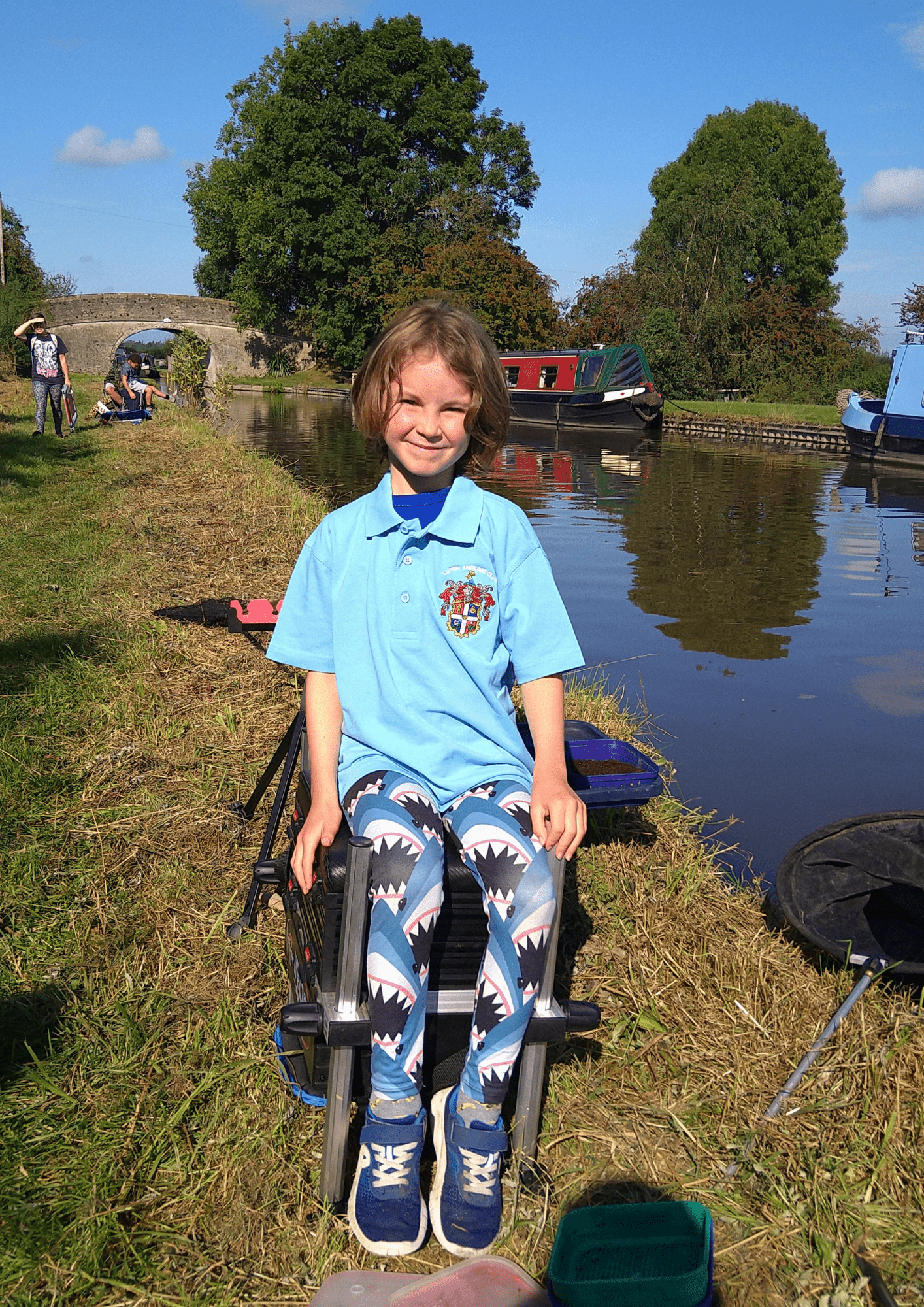 I am enormously grateful to all the support, tuition and kit we have received, particularly from Mark Brookes and Dennis Hunt at Luton AC. With their help, I have high hopes for Hugo. Hugo had a special invite to a coaches winter training day where we explored things like rig making, pole elastication and groundbait making. Armed with all this new knowledge, he just can’t wait to get out and fish again!