This article comes with a health warning to anyone who works in the motor industry, in particular mechanics and garage owners. Whatever you do, don’t ever admit to an Environment Agency warranted fisheries bailiff that you have just fixed an engine. You could be in more trouble than you perhaps realise.

My long suffering wife, who was born and grew up in Ethiopia, is often pointing out the idiosyncratic nature of the English language. Frankly, she has a damn cheek. How can Amharic, a language with over 200 unique letters in its alphabet (the only such African alphabet) possibly be easier to learn than the good old English language? Even I have to admit the phrase fixed engine is plainly ridiculous. The term ought to at least have some connection with motorised vehicles, but in the fisheries world a fixed engine has no such connection, unless you fix a net or set line to one that is.

So what exactly is a fixed engine?

The term fixed engine is a general expression indicating a method of trapping fish by means of device of some kind, which is fixed to the bed or bank. Things that are fixed engine include: 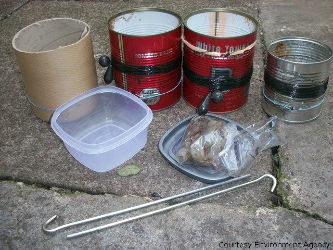 Obviously setlines are staked into the bank and could be construed as being a fixed device to take fish, but they are also listed under Section 1 of the Salmon & Freshwater Fisheries Act, 1975, along with cross-lines, snares, fire-arms and gaffs. By the way, throwing stones for the purpose of taking or killing fish is also a Section 1 offence. I wonder how many fish have been taken by this latter method? 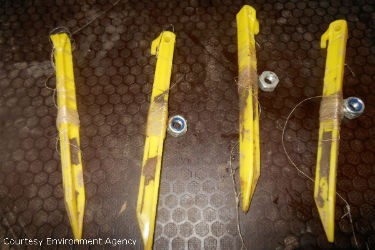 A putcher is a funnel shaped basket like fishing trap, made traditionally from willow and hazel. The fish swim through the open end – which was traditionally around two feet in diameter, narrowing off considerably along its length so that salmon not being able to turn around – would become trapped. A huge group of putchers are stacked together to form what is technically known as a fishing weir. The apertures to most fishing weirs faced upstream and were designed to catch fish on the ebb tide. At low tide the trapped fish would be exposed and the fisherman would quickly harvest the catch before rising waters would once again engulf the fishing weir.

A putt is a larger contraption than a putcher, but relied on the same principle of funnelling fish. They are made of three sections, the kype, the forewheel and, depending on which species you aimed to catch, either a butt (for salmon) or the diddle (designed for eels, flounder etc.) Knowledge of some of these quaint terms might come in handy if you ever find yourself as a contestant on the TV Show, Call My Bluff.

On the River Thames and its tributaries in the middle ages, significant numbers of eels were harvested using wicker baskets called eel bucks. Large numbers of these bucks would be fixed to wooden posts to form a fishing mill. They were designed to capture silver eels making their way back to the sea in the autumn. It is recorded that the largest eel (LINK) ever caught in an eel buck weighed an impressive 15 lbs, well in excess of the current rod-caught record for the species.

Law revolving around the regulation of our fisheries has been around an awful long time and modern law allows for exceptions in the case of the use of fixed engines if one can demonstrate the exercise of an ancient right. If at the time of the passing of the 1861 Salmon Act, you had a right to use a fixed engine courtesy of any grant, charter or record of immemorial usage, then you could carry on. In law, immemorial usage or since time immemorial means usage from at the time of the beginning of the reign of Richard the Lionheart in September 1189. Alas, poor Richard never got a chance to use many fixed engines of his own as most of his reign was spent on crusades in the Middle East and he barely spent any time in England at all.

Authorising the use of modern day fixed engines

Permission to use fixed engines in any inland or tidal water was, up until recently, issued under Section 6 of the 1975 Salmon & Freshwater Fisheries Act. This has now been repealed and fixed engines, along with other methods of taking fish, are now covered by Section 27A of the Salmon & Freshwater Fisheries Act 1975 (as amended by Marine & Coastal Access Act, 2009). 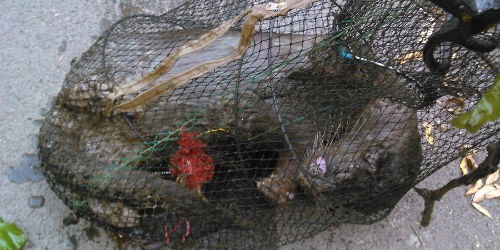 The use of illegal fixed engines can end up with disastrous consequences. In the past couple of years we have had to deal with three incidents of otters drowned in unauthorised traps. Should you ever encounter a fish trap, fish line or other suspicious looking implement on or in the water, please do report it immediately to the Environment Agency 24 hour hotline on 0800 807060. Do not remove the instrument unless guided to do so by the Agency as you may be inadvertently destroying the evidence required for a successful prosecution.