Extracts from the history of the Blenheim Angling Society

Fishing in all its forms has a fascinating history. Thanks largely to the hard work and dedication of secretary Fred Lancaster, with some help from us, the Society has produced a detailed club history. Here are some interesting snippets for your perusal.

The Blenheim Angling Society was formed in 1880 by a small number of businessmen mainly dentists, doctors and solicitors. The name was taken from the Blenheim Arms public house in Notting Hill Gate, where these fine fellows held their meetings. They quickly became the London Anglers Association (LAA) affiliated club and in 1884 Mr F Metz was the first Blenheim member to be elected onto the LAA committee that had recently been set up by Philip Geen.

The first water to be rented by Blenheim was the Grand Junction Canal from Springwell to Rickmansworth, Batchworth Lock 81 to Springwell Lock 83, back in 1883.

The Springwell fishery, upstream of Batchworth Lock, was then known as the Adders Copse (possibly snakes were present) and was at that time leased from a club called The True Waltonians Angling Society, which was founded back in 1830.

In February 1897 Major William Hogarth, a surgeon at St. Bartholomew’s Hospital, member of the College of Surgeons and member of the Blenheim Angling Society, wrote to the LAA committee 'when the LAA was next netting a water near the Blenheim’s waters he would pay 50 guineas (about £13,000 at today’s prices) to the cost of transfer of fish to Blenheim’s waters'. In July 1897 the request was granted with 500 tench, 700 roach, 100 carp and 500 bream, plus some smaller fish stocked into the Grand Junction Canal from Springwell down to Bottle Bridge.

The club received further help with fish stocks in 1908 when 4000 bream, netted by the LAA and the Thames Angling Preservation Society, were stocked in the Grand Junction Canal from Springwell down to Denham. In the same year a netting at Denham by the Blenheim Angling Society was to help the LAA Grand Junction Canal on the Slough Arm at Langley, after fish losses due to hot summer temperatures. It’s interesting to note that the fish were moved in large leather tanks and transported by coal fuelled lorries to their destination. As far as we know, no consents were required for fish movement in those days. 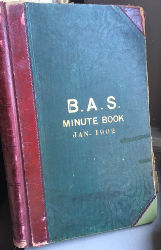 Up until 1902, members were restricted to having to reside within two miles of the London headquarters to be able to join the Society. This rule was changed at the 1902 AGM and the restriction removed. Queen Victoria passed away in 1901 and her son, Edward V11, came to the throne. A contest to celebrate the occasion was organised and the prizes for a match called 'The Coronation Match' held on Coronation Day, 09 August 1902, were as follows:

We know this because the beautiful minute book (above) from 1902 survives intact with gold lettering on the cover to boot.

The 1902 Christmas match prizes were quite something. It certainly sounded like a match well worth attending, albeit there were sadly no false teeth on offer to a lucky winner this time around.

Plus various two shilling and sixpence prizes and a dozen Duidigial cigars. In the end the match was carried over two days as all of the prizes were not won on the first day.

The challenge of recruiting and retaining volunteers

It seems that some things never really change in the angling world. Even back in 1902 willing volunteers proved hard to recruit and even harder to retain. A Mr Chaplais was elected president and secretary in May 1902 and promptly resigned in June the same year. Mr Freedman was proposed for these positions and refused the offer. Even in those far off days nobody jumped to volunteer for these jobs. The treasurer was Mr Frank Wilson, a dentist who was also one of the trustees, together with Henry Lonsbrough, a chemist, and John Roberts, a Cornish farmer. At this time twelve members formed the committee. Any member or officer not attending 13 meetings a year was fined for each default. Ordinary members were fined three pence each, whilst officers and committee members had to pay six pence. I wonder how modern day anglers would respond if these sorts of rules applied today.

Recruiting members and the Geen connection 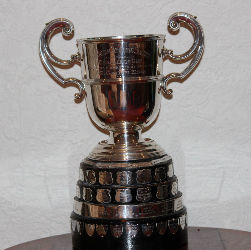 George Geen, a well-known figure in angling circles, joined the Society in 1904 and presented a trophy to the club in 1909. George’s brother Philip Geen, of course, was the highly respected chairman of the London Anglers Association and his trophy, the Geen Cup, is still fished for to this day by members of the London Anglers Association, as is the George Geen Cup by Blenheim Angling Society members

All fish to be weighed for Blenheim matches had to be taken to the Pelican Hotel headquarters where the official scales were kept; presumably the fish were now very dead indeed. Either that or they were extremely hardy fish. This was entirely the norm during this era. Matches tended to start at around 10.30 am as most, if not all, competitors travelled by train and the match would finish at around 8.00 pm. depending on the time of year. The Society would donate £1.10s.0d. (£1.50) prize money on some matches split up 11s.0d, 8s.0d, 6s.0d and 5s.0d to pay the first four.

The 1906 Christmas match prize list was again quite substantial with prizes ranging from the smallest at 2s.6d. to bottles of spirit, turkeys, ducks, geese and cigars, some 35 prizes in all, donated by attending members able to afford them. Any member wishing to fish the match and not donating a prize was charged two shillings to enter. The match was fished over two Sundays as some members were unable to attend the first Sunday. A total of 18 members weighed in with weights from 4 lb for the winner down to 3 ½ ozs for the competitor bring up the rear.

In 1921 the Blenheim shield team beat the Cambridge Heath Angling Society by 31 fish to two, fished at Shepperton on the Thames, which took them into the semi-final. The semi-final was fished at Taplow against the Acton Angling Society and Blenheim won overwhelmingly, even though fishing one man short through illness. They were then to fish the Barking Angling Society on 18 December on the Thames at Windsor. Blenheim won the match with a record of 57 fish to three, their first win in many years of competing in the LAA shield match. Sadly, Blenheim have never been able to repeat that triumph. In 1924 Blenheim member, Bill Willcocks, was selected to represent the LAA and won the All England on the River Glen. We know he was presented with this fine memento of his success, but how this came to be is still being researched. 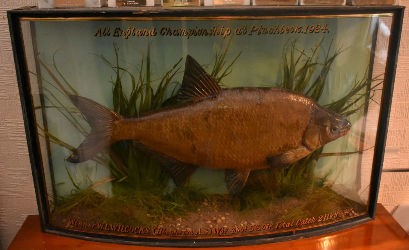 In May 1928 an application was made to the Thames Conservancy to remove swans from the Colnbrook at Wraysbury. A reply from the Lord Chamberlain’s office confirmed that the application had been approved. The fate of the said swans in not recorded but, like sturgeon, swans are the property of the crown.

The war years were tough as members suffered the consequences of the Blitz and forces call ups. The club was even able to achieve a rent reduction during that period, a fascinating story that will be covered in an upcoming blog. Membership picked up after the war. In that era one of social highlights were dinner dances, this picture having been taken on such an occasion back in the 1950s. 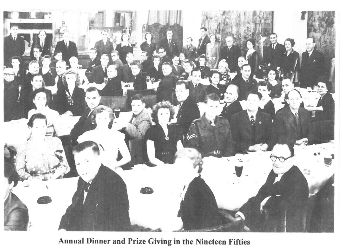 Those of us of a certain vintage grew up in the era of the cold war. In May 1975 the trade delegation from the USSR were given a bulk membership of the Society and, in appreciation, they presented the Society with a silver replica of a samovar – a Russian tea pot. It’s well known that the current President of Russia, Vladimir Putin, is keen on his fishing so maybe, if asked, Blenheim would repeat the offer when President Putin is next in town. Even better, they could invite Donald Trump and Theresa May along too for an international fishing contest with a difference. Now that would catapult the Trust firmly into the world news.