This story of Essex Counties’ 1982 triumph has been brought to you courtesy of Browning and was originally written by Bob Cheeseman, a member of that winning Essex County Team.

Qualifying for the World Club Championships

The event brings together the national champions of the competing countries. Before the fall of the iron curtain and the redrawing of the European map there were fewer eligible countries. To qualify to represent England in this competition your club had to win the first division national championships. Essex County Angling Association achieved this in 1981 on the River Ancholme, beating 79 other teams with a score of 714 points, 26 more than the second place team. The match will long be remembered as one of the tougher nationals.

So it was time to prepare for the trip of a lifetime and fish the second ever Browning World Club Championship on the River Arno in Florence Italy. We gained some knowledge before leaving by watching a video of an international competition that had been held on the venue the previous year.

Headed by manager Dennis Salmon, we decided that we would travel to Italy two weeks before the event. This was to give us time to practice and gain as much local knowledge as possible. It was going to be an expensive trip, costing us around £1,500 each. Sponsorship in those days was hard to come by, however we managed to get a supply of groundbait and lightweight jackets from the then British Groundbaits. They also supplied some stickymag and Ace, a groundbait additive.

Because of the expense involved, only six of the 12-man squad that had formed the national team had decided to travel. They were Gordon Blanks, Tom Boulton, Bob Cheeseman, Graham Fletcher, Bob Nudd and Micky Thill, along with manager Dennis Salmon.

Journey to the venue

Having so much gear and groundbait to take, we loaded up the cars, took the ferry to France and travelled down through the Alps and into Italy, arriving the following morning in Florence. After unpacking we went down to the river and found it three feet down below normal level. The levels restored to normal during the following week.

We found a local tackle shop and introduced ourselves to the owner, Andre Coclini. He was very helpful and took us to the river and showed us how the locals approach it. He had great knowledge of the venue and a magnificent stock of whips, poles and pole floats in his shop. During practice we found that the upstream sections were better for small carp, wasse, carrasio and goldfish. The third section held the bigger carp up to 5 lbs and the last section closest to the Ponte Vecchio Bridge was the hardest, with small chub, carrasio and carp. During practice we had weights of up to 26 lbs on the waggler and 20 lbs on the pole, comprising mainly carp along with wasse, chub, carrasio, goldfish and catfish. Most of our practice sessions took place between 7.00 am and 10.00 am as these would be the match times. This gave us lots of free time to talk to locals, visit tackle shops and the surrounding areas. With the help of Andre, his knowledge of whip and pole fishing and our expertise of waggler fishing, we formulated a plan of attack.

I started fishing at 7.00 am on the five metre whip and was quickly into an 8 oz chub, which gave rise to applause from the watching crowd. A few smaller fish followed before that line dried up. I went over my joker line with a bloodworm hookbait, but had very little response. I fished further out with maggot at 10 meters and caught some small carp, goldfish and carrasio. In the last hour I went on the waggler line were I had been feeding small balls of stickymag and had an immediate response, taking some slightly better carp and more goldfish. One of my carp kited way to my right, with my rod tip two feet under the surface, playing the fish it went round the adjacent angler’s pole tackle and brought an immediate strike. Fortunately, my float never surfaced before his hook came away and I successfully landed the carp. My float stayed below the surface until the fish was in my area, which stopped me having the fish disqualified.

News from the other team members 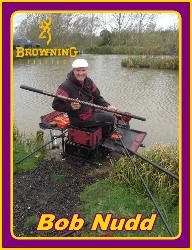 During the match, the runners had advised that Micky Thill had caught some chub on the whip early on, but was now struggling a bit. Bob Nudd had landed two decent carp along with some bits and Tom Boulton, although having been told off for feeding balls of groundbait bigger than a walnut, had had a poor start but was now catching up fast with his slider tactics.

When the final whistle blew at 10.00 am, Dennis and the two runners, Graham Fletcher and Gordon Blanks, felt we may have won and that Bob Nudd had a decent shout to be the individual winner. After weighing in and adding up the points the organisers ‘Browning’ advised that we had won both the team and individual trophies.

Points and teams on the day

We were presented with this massive trophy - see main picture - on the bank immediately after the results had been announced. Later that evening the team were formally presented with the trophy and accompanying medals. Bob Nudd was also presented with the individual trophy. Back then, it could hardly be imagined that it would take until 2016 for another English team, Dorking, to once again take this title.