There is always something special about a big national junior event. Like many kids who get into fishing, I’ve always loved taking part in events with loads of atmosphere but have also dreamt of being victorious in a big national occasion.

I’ve even had a few near misses to my name. I know that you need both skill and that little slice of fishing luck to achieve this dream. And so it was with nervous optimism that I approached the latest big day, managed by Canal & River Trust to celebrate young people and their involvement in fishing.

Th 2020 event was organised in line with Angling Trust match rules around Covid. The draw was held 48 hours before to avoid crowds and Matt Godfrey had picked out peg 54 for me. Upon arrival, we were all ushered into a field gently sloping down on an angle with the cars nicely packed in. What would we do without the support of friendly landowners letting us anglers have the use of their grassy fields? The atmosphere was outstanding and the helpful Let’s Fish coaches directed us to the pegs. Everyone seemed extremely kind and welcoming. The pre-match nerves drifted away, and the stress and pressure was almost lifted off my shoulders until I came face to face to my first challenge.

”Oh dear” I must have said as I was greeted with a 10ft steep slope down to the canal. With a proper high quality minted out trolley I wasn’t unduly concerned. But the front and only wheel of said trolley then fell off. This led to gravity taking over and my fishing tackle cascading down the bank, making a grimy sound like a fork on a plate as it did so. After that unfortunate experience, I composed myself and made my way to an aquarium of a peg (54) with some Mr Crabtree like roots protruding from the offside bank just 10 metres away. It was one of the famous Hinstock cable swims. Could this be the peg of my dreams and maybe an even better one than my Dad Trevor Chalk’s draw on the Thames Championships back in 1996 to record his one famous match win! 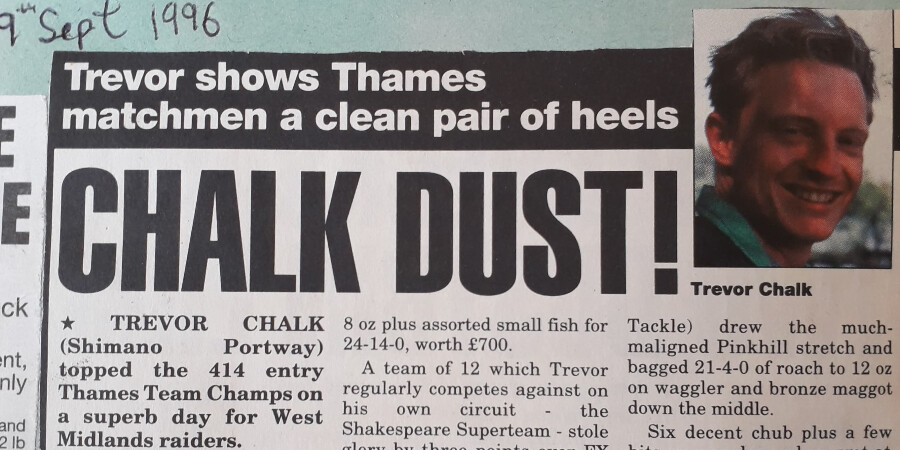 I set up a small number of  high precision rigs, included a 3-metre pole rig to fish close in for the first hour. There was also rigs for  long pole at 10 metres to the roots and both a maggot and worm rig set for down the track at different angles. I was ready and eager as the all-in sounded. I had loads of bites and fish in that first 60 minutes but not a huge weight, steadily catching small gudgeon and roach on my 3-metre whip as were others that I could see around me. My feeding rate was consistent; every minute with 4-5 squatts and a chicken nugget sized piece of groundbait if I felt bites were tailing off. As the 60- minute hooter sounded, I was probably got 10 to 12 ounces in the net. A solid start. It was now time for a tactical change.

I switched to fishing down the track on my worm rig and I had a small perch straight away followed by another similar sized fish.  However a boat going a little too quickly ploughed through this swim causing a dead period. Using a pole cup, I then baited up my far bank swim with chopped worm and casters and plus a little ground bait just to bind the bait together. 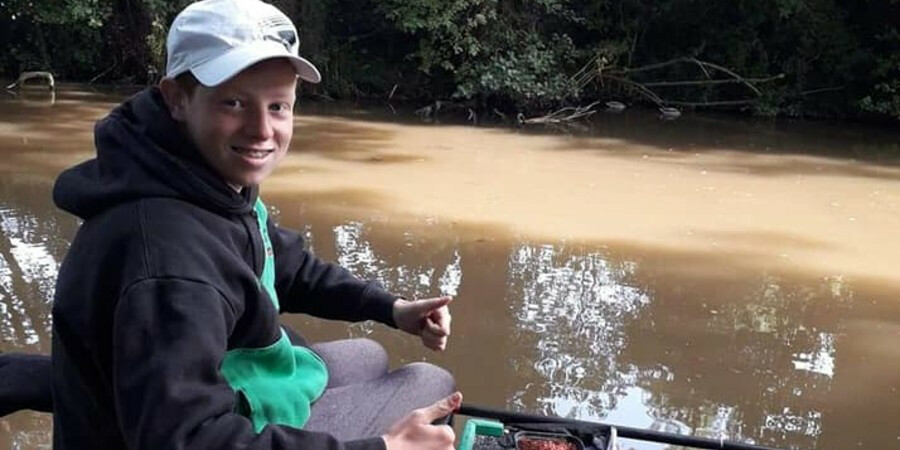 Quite a few minutes passed by with me continuing with both maggot and worm rigs down the track of the canal without further bites. I felt I was falling behind the immediate match with anglers either side of me, Logan Barmingham (peg 55) and Kane Hibbert (peg 53) appearing to be pulling ahead of me. Therefore I decided to switch to the far bank line hoping for a rapid change of fortune.

Within 2 minutes, I was rewarded with a bite. It was another decent perch which was soon safely in the landing net. Mr Stripy was not on its own and I snared 5 or 6 more in quick succession. Suddenly, I hooked something huge and I promptly lost it. I was too soft with the fish and let it just control me and it snagged me up on the roots.” Oh dear me’ or something like that, I muttered under my breath as I thought that would be my only chance of framing which I had just thrown out of the window.

Most anglers dream of hooking a really big fish, but it takes skill to know how to target these and what to do while you’re waiting. Click here to watch Motty reveal his big fish tips.

Steadily, minutes ticked away as we approached the final hour where dreams can be fulfilled or shattered. On a canal, the whole field can still potentially win with an hour to go for two or three bonus fish can shoot you right to the top of the leader board. All of a sudden, my chance to fully redeem myself arose again. Learning from my previous error, I had a plan to tackle the situation. After a lengthy battle with my strength 8 elastic stretching the length of my top kit, I managed to land the beast of the perch that must have been 2lbs+. After landing this, my peg came to life supplying me with palm sized skimmers, a decent roach-bream hybrid, more perch and a few roach.  I was in full focus mode as I knew now, this was my chance of possibly winning this big match. 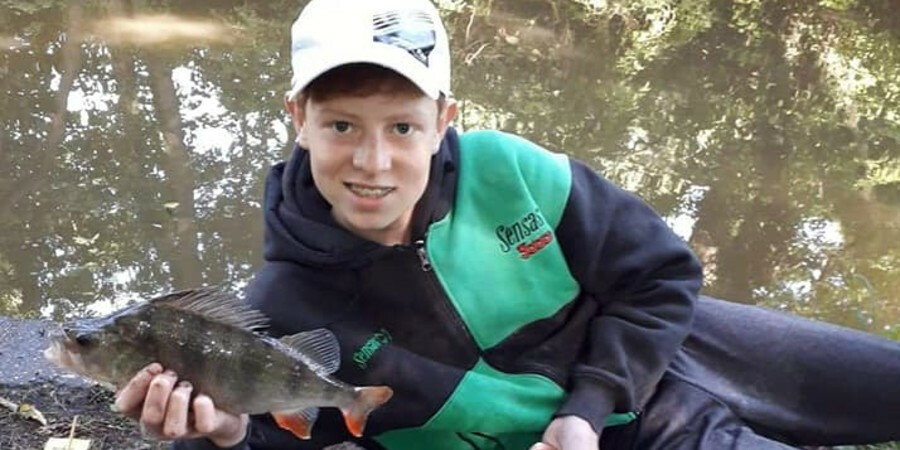 “Aaalll ouuuut!” one of the organisers cried. Three and a half hours had flown by. I was relieved for a minute as I could stretch my legs. I realised I didn’t know how everyone else has done around me, having been so focussed on my own performance. The weigh-in started at peg 59 and was being streamed live on Facebook. It can still be viewed on the Canal & River Trust Angling Facebook page.  My good friend Logan Barmingham weighed 3kg 200g from peg 55 and I was sure that it was going to be a close call. Then it came my turn to weigh in. Neil Turner, brother of canal legend Paul Turner removed the net with  Chris Harvey on the scales. The scales jiggered, for a few seconds the fish would not settle down, the atmosphere became tense. ‘3kg 800g’ announced Chris and I could not believe it! I was in the lead. All I could now do was wait. News had filtered along the bank that a young girl called Izzy Gibbons had caught a good bag of skimmers. Following the scales was not permitted due to the Covid rules and in any case pegs 1 to 30 were being weighed in by a separate team. So I packed away and made my way back to where the results would be announced.

Fortunately, my weight took first spot making me the individual Angling Direct junior canal championship winner.  Also, a huge well done to my team mates, Jake Checketts and Billy Pitman for enabling the team, the Gudgeon Gatherers to win the teams of three event on the day. The full results can be found here. 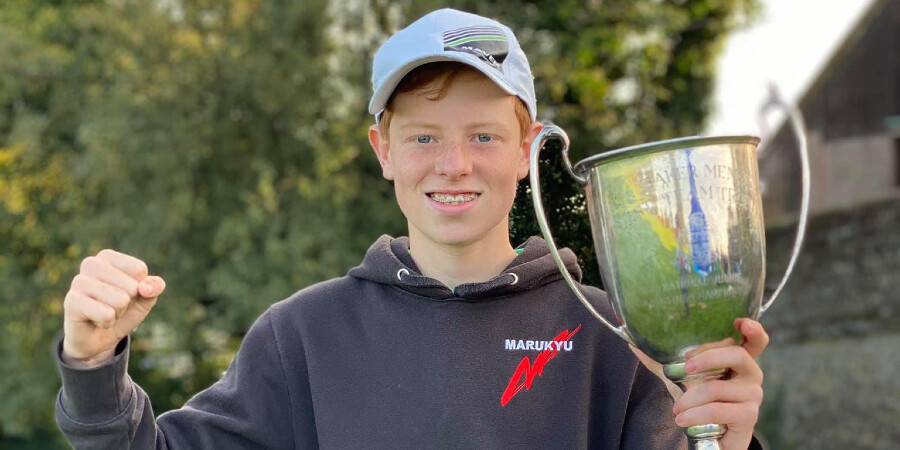 I said at the beginning you need a bit of luck to win a big match and drawing the peg I did, helped give me a chance of a good catch. You still have to have the knowledge and confidence to catch the fish though, and this result will help improve my self-belief. In a normal year there would have been well-over 70 juniors taking part with quite a few entrants having to pull out due to local lockdowns etc. Having to fish on the inside line for the first hour was interesting. I can see that it makes it a more level playing field. There were certainly plenty of fish to be caught there.

If this rule encourages more kids to try friendly match fishing and not being put off entering this event or then not feeling overawed by seeing those with more fishing experience and lots of equipment, then it can only be a good thing for the sport. There were also plenty of Let’s Fish coaches on the bank helping out those who needed it.  Hopefully, all who took part this year will stick at their fishing and return this year. There will definitely be a new junior champion in 2021 for having reached the ripe old of 16, I will now step up to compete in the youth section. The same is true for the cadet champion, Charlie Beetham-Grainger who will take part in the junior section (11 to 15)  for the first time.

If you would like to find out more about joining in and being part of these annual celebrations of young people and fishing, click here.