Catching up with the Moultons

One of the first anglers that I ever looked up to as something of a local superstar was Harry Moulton.

Then as now, Harry lived in Nantwich, which seemed to the boy in short trousers a huge metropolis, a far more important place in comparison to my local haunts of Whitchurch, Malpas and Whixall. Forty years later, it was a delight to catch up with Harry and his equally famous son Ian.

My dad was a latecomer to match fishing, having been married for a few years before feeling the urge to seek a little peace, quiet and friendly competition on a Sunday morning. An escape from the rigours of farming, not from my talkative mum, you must understand.

By the early 1970s, dad had set a goal on winning the Bulls Head Angling Club points cup, not an easy task for a full-time tenant farmer with 50 cows to milk and 200 pigs to feed before heading off to the 7am draw, young son excitedly in tow. We were rarely on time, especially after collecting Harry and Wilf Jones on route. Dad had a maggot disaster on one occasion at the Jones’.

In pursuit of an edge

After Friday evening milking, we would travel weekly to Nantwich; for the tackle shop there was a proper one. Three shops selling fishing tackle in Whitchurch didn’t stock the sort of tackle and bait that top anglers of the era like Benny Ashurst, Billy Lane and Ivan Marks were using. That Nantwich shop, run then by Billy Jones, was a true Aladdin’s cave. They stocked a proper range of bait including squatts, pinkies and casters.

The first time I capped eyes on Harry was when he and a group of adult anglers were discussing prospects for the upcoming Trent national. Not long after Harry took over the running of that shop. When Dad was too busy, I cycled the 30 mile round trip to Nantwich on several occasions. This was to ensure that I had the best possible bait for the Grindley Brook and other local matches.

Would today’s youngsters have the commitment and dedication to cycle 30 miles to ensure they had top notch squatts and pinkies for a match on the canal that would most likely be won with less than a pound? I rather doubt it. 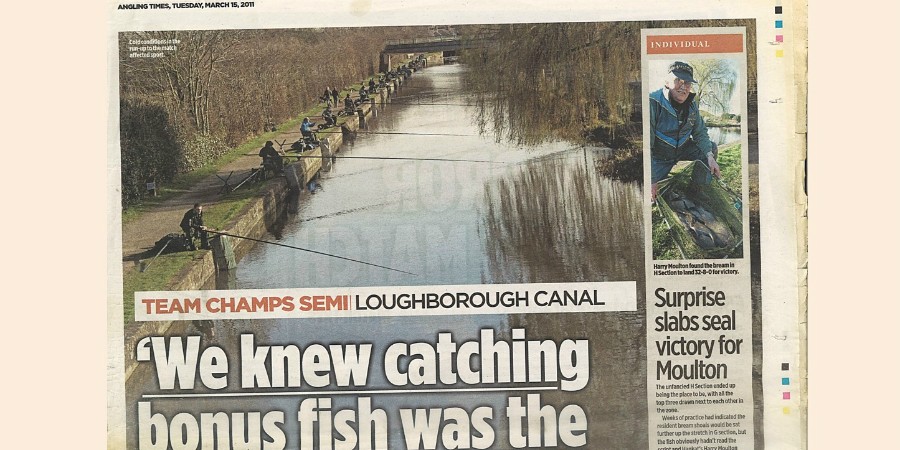 Nationals in the 1970s were epic affairs with intense rivalry especially between the Leicester team captained by Ivan Marks and the Birmingham AA team with Clive Smith at the helm and with stars like Max Winters and Kevin Ashurst in the line-up. Harrys’ team in that era was Wyche Anglers who while never the bookies favourites, were always mentioned in dispatches as good each way bets in pre-match press coverage. The Wyche team lining the banks that day were:

What a character Robin Astley was and good angler to boot. With the results announced in reverse order, it was Leicester who ended in fourth spot, the strongly fancied Notts Federation in third position with 703 points, Wyche had defied the odds to finish in an incredible second (their best national performance to date) on 716 points with the Birmingham AA romping to victory with 773 points to repeat their 1975 Nene triumph. After that, the Wyche team members were local celebrities in the South Cheshire area.

Farmers of the gentle kind

There were plenty of farmers in Shropshire and Cheshire in the 1970s, my family included. There still is today although farms have got bigger and thus the number of farmers and farm workers is far fewer.

Harry was a true gentle-man farmer for along with partner Eric Marsh he produced many gallons of gentles rather than milk, cheese or the humble potato. Mohmar the name of the maggot breeding business emerged from the initials of the two owners and were to go on to sponsor on of the best match team of the 1980s and 1990s.

Harry’s son Ian continues to run the business to this day. Demand for their wares today is nothing like it was back in the 1970s and their maggot farm is one of only ten or so currently in production in the UK. The Maggot King Arthur Bryant would turn in his grave at this unhappy state of affairs.

Harry reached pensionable age some time ago. His love of the canal network as a place to mentally unwind and exercise the match fishing brain remains undiminished. Harry is still fishing matches on the Cheshire canal network and long may that continue. For like all anglers, Harry knows that life is better by water. As for his son Ian, you can find out this time next week how he too is still experiencing the health and wellbeing benefits that our waterways provide.