A weekend with Steve Gardener

Back in early November I drove with eager anticipation to Aldershot’s Gold Valley fishery, not for a fishing session, but to attend the launch of 'Steve Gardener on A Life in Match Fishing’ by Steve Gardener and Pat Newman.

In summary, it’s a book that’s a must read for any club angler, aspiring or current open match anglers, up and coming youngsters and anyone with an interest in the history of angling from the 1960s to the present day.

Steve was not somebody I had ever properly met before. I had fished against him in a few opens, most memorably on the Rifles pairs match at Enfield. With thousands of others, I stood in the crowd behind him on day two at the 1994 World Championships at Holme Pierrepoint, willing his float to go under just once, which it subsequently did. I watched him in practice and briefly in action in the Zagreb world championships in 1998, an event which England went on to win.

Ian Hirst, the Doncaster DAA secretary and I stood behind his peg for a while on the New Junction Canal as Steve went on to take individual top weight in the Division One National and Dorking the team crown back in 2011. 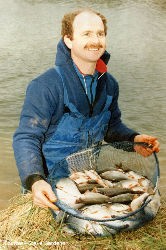 A chat with Steve

On the big day, Steve was prepared to spend several minutes chatting to various ordinary anglers like myself. He treated us exactly the same as the host of angling celebrities in attendance. This confirmed what everyone had always told me; that Steve has no airs and graces, for he is a true gent.

It was no surprise to me that Steve loves canal fishing too, the southern Grand Union being his particular favourite. Before I read his book, I thought he was possibly the greatest angler to have ever represented England. Now, after having digested the contents, I know it for sure.

The volume does come with one health warning though. If you are anything like me, once you open it you will be fully immersed and unlikely to want to put it down. So it came to pass that I spent the entire weekend engrossed in the life story of Steve Gardener. This article will hopefully give you a taste of the contents of the book and inspire you to want to find out more of the angling exploits of the great man. 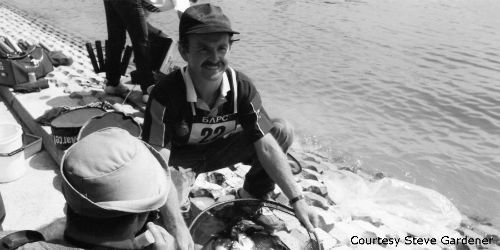 There were calls for Steve to be selected for the England team long before his eventual call up in 1987 by the recently appointed manager, Dick Clegg.

Subsequently, Steve was selected for 27 consecutive world championships, a record that Alan Scotthorne and Will Raison may eventually overtake, we shall see. I do wonder if any angler from any country in the world has represented his nation on more occasions. In his world championship career Steve won 11 golds, five silver and two team bronzes plus an individual silver and bronze for good measure. It’s a half decent haul by anyone’s standards!

Steve also fished 16 consecutive European championships from 1997 to 2012, wining another four gold medals, five silver and two bronzes. So at World and European level, Steve picked up a medal in two out of every three events. That really is an awesome achievement over the course of getting on for three decades. The stories behind these headlines make truly fascinating reading and a significant chunk of the book is dedicated to these.

In 2006, an analysis of the top twenty points scoring anglers was undertaken based on performance in the 2001 to 2005 world championships. Steve came out on top with a score of 4.9, ahead of Stu Conroy on 5.2. Alan Scotthorne was 8th with 7.1 and Will Raison 13th with 8.5. Pat Newman has calculated Steve’s overall career average daily penalty points score as 5.9 in World championships and 4.6 in European championships. With the standard of angling on the world stage rising each and every year, I rather suspect these stats will remain in the record books for an awfully long time.

Steve’s early national career was with CALPAC where the character of Ray Mumford played a leading role. From 1979 onwards Steve fished a total of 21 nationals for Dorking, winning a total of 13 championship medals. Best we know, only the great Billy Lane (link) has won more. Billy collected no less than 18 national medals between 1954 and 1969. Steve missed out on a few national appearances as Dorking did not compete for a while at the turn of the century.

On several other occasions, nationals clashed with world championships and naturally these took priority for Steve. In the 2011 Division One National, held on the New Junction Canal, Steve was crowned Individual Division One National Champion and Dorking won the team event for the first time. A year later, Dorking became only the second team ever to win back to back Division One titles. This equalled the record of Birmingham Anglers Association back in 1976, whose team included Max Winters.

Like many great champions, Steve certainly knew all about quitting at the very top, for the 2012 event was his final national with the Dorking team. I don’t suppose Steve will ever be talked out of national championship retirement. I do think the Canal & River Trust angling team might be prepared to tweak our team selection rules though if Steve does fancy another crack at winning a New Junction National in 2017. 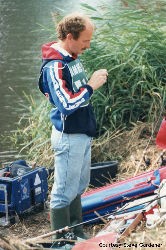 I was nine when I made by personal winter league debut for the Bulls Head B team on the Llangollen on a bitterly cold November morning. I recall the pain of the frozen feet, but I shall never forget the pride with which I placed 14 gudgeon and a solitary roach on the scales for 5 oz 12 drams and a top half section placing. Dad told me that I must never consider myself a proper fisherman until I had completed the full winter league campaign and I duly took him at his word.

Steve’s winter league record in numerous campaigns is truly remarkable and is almost certainly the greatest in history, unless you know differently that is. The Surrey winter league was, from 1971 until 2011, part of the Angling Times winter league series. Steve’s Dorking team won it every year except in 1973/74 when they finished third to Leatherhead and in 1992/93 when they finished second to Banstead. The Dorking team went on to qualify for an incredible 21 finals and then win a record nine winter league finals. Steve lined up in that winning side on no fewer than 8 occasions. Phenomenal.

As you turn the pages of the book, Steve’s professional attitude to his fishing comes through, but you could tell he has enjoyed every minute of it too. I think what struck me more than anything was his ability to consistently catch just one or maybe a few fish from pegs where others would have blanked. In that Rifles pairs match I referred to earlier, he weighed just over a pound and a half for a section win from a bad area.

Nobody else, top Trev’s Browning lads included, weighed in more than 6 or 8 oz in that section. To me, these sorts of angling performances on a consistent basis are far more remarkable and require much greater skill than emptying fliers on heavily stocked commercials. Was this skill ever better demonstrated than on the second day at Holme Pierrepoint in the 1994 World Championships? England were in third slot after day one and under pressure.

Half way through the second day, Steve was in a line of 20 anglers, all of whom were blanking. He somehow caught a solitary perch that day and when the all-out hooter sounded, there were 14 blanks in one direction and 5 in the other. Without that single fish, England would not have won the World Championship. I reckon that if I was forced to choose someone to fish for my life, I think that someone would have to be Steve Gardener.

I always feel it’s a great shame that angling doesn’t really celebrate its heroes. More often than not, we argue about which branch of our sport is ‘proper fishing’. The sport has let itself down in this regard and I don’t know why that should be.

Historically, I think it would have helped if the BBC had recognised angling as something more than a worm at one end and a fool at the other. At least that’s now happening elsewhere due to the good works of the likes of Rob Hughes. We do live in a remarkable era of British sporting greats. During Steve’s career we have seen the likes of Steve Redgrave, Gazza, Mo Farah, Andy Murray, Jessica Ennis, Joe Calzaghe, Alastair Cook, Nicola Adams, Kelly Holmes etc reach the pinnacle of their chosen sports.

We could debate for ever the relative merits of these and dozens of other sporting icons. It would not seem unreasonable that Steve and a few others like him should not be in a UK top hundred all-time list. Steve has closely mentored another great international angler, William Raison. If I had to put money on anyone breaking Steve’s England appearance records, it would be Will, providing he can maintain the desire. For that has been another remarkable achievement on Steve’s behalf;staying at the top is often more difficult that getting there in the first place. 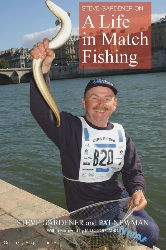 If this article has inspired you to find out more about the life of Steve Gardener, then why not treat yourself this Christmas. An even better idea is to persuade someone else to buy you a copy of 'Steve Gardener on A Life in Match Fishing’ which is what Carl Nicholls and Paul Breslin amongst others have managed to do at my expense. Mind you, they will both be tested on its contents at our January fisheries team meeting.