A profile of Simon Nickless

In October 2016 Simon Nickless and his partner Steve Dudley trounced a high class field in the 2016 Canal & River Trust/Angling Trust canal pairs final. I couldn’t wait to meet up with Simon to find out about his angling career and what makes him tick.

I recall competing in matches against Simon three decades ago but unlike me, Simon is still competing at the very top of the sport.

Like so many top class anglers, Simon’s name can be added to the long list of people who first learnt to fish on their local canal. Simon was aged 10 when his father took him to a Cannock Festival of Sport match on his local Staffs and Worcester canal at Rodbaston. Simon lined up alongside 70 other juniors and stormed to victory with a weight of 6 oz 9 drams. Not a massive catch, although marginally better than the 4oz 4 drams the young Rob Hughes managed when he won his first ever match on the Llangollen Canal. Simon went on to win the next two junior canal matches he entered and thus was well and truly hooked. Not long afterwards, local tackle dealer Dave Willian had taken Simon under his wing and before very long, Simon was a signed up member of both Blackford Progressives and Broomhill Angling Clubs. 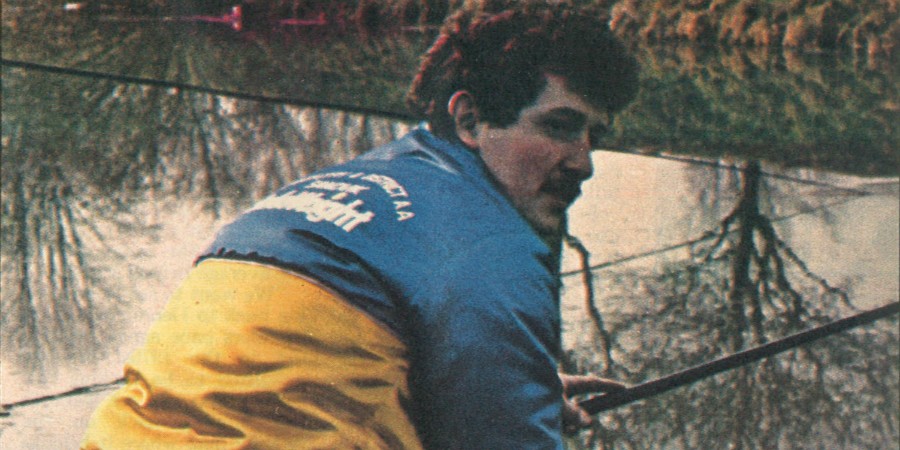 Simon soon learned that to improve his fishing knowledge he needed to start mixing with top anglers and travelling to different venues. In his early match fishing career, Billy Makin and Ray Mills were two experts who Simon gleaned a lot from. Simon kicked off his team fishing career when he joined the North Staffs Match Group, a squad run by Phil Briscoe.  It wasn’t long before Simon was part of the Coventry Safeweight squad. Since then, he has fished for Tipton match group, Preston Izaak Walton Shakespeare, Starlets, St Helens (Saints) and currently the 2016 Division 2 National Championship winners, Sensas Black Country.

As we munched our lunch, Simon reeled off a list of canal venues where he had money over the years. He tested my geographical knowledge of the network to its limit as we ran through the nations waterways. It begs the question as to whether there is another living angler in the UK who can boast a better record on the nations canals. Simon has been in the frame on the Lancaster, Sankey St Helens, Leeds & Liverpool, Calder & Hebble, New Junction, Stainforth & Keadby, Macclesfield, Erewash, Fossdyke, Grantham, Trent & Mersey, Caldon, Middlewich Branch, Shropshire Union, Llangollen, Staffs & Worcester, Birmingham & Fazeley, Worcester & Birmingham, Tame Valley, Anglesey Branch, Soho Loop, Birmingham Main Line, Dudley Number 1, Bridgwater, Coventry, Ashby, North Oxford, South Oxford, Grand Union mainline, Grand Union Leicester Line, Gloucester & Sharpness canal and Selby. Missing from the list thus far are the Basingstoke, Aylesbury Arm and Kennet & Avon all of which are holding qualifying events for the 2017 Canal Pairs. Maybe we can tempt him to add some new venues to his tally.

I think it’s fair to say that like most anglers, Simon is happy catching fish on pretty much every method although he really enjoys fishing with bloodworm and joker. Putting Simon on the spot, I asked him to select an imaginary all time dream team of the top dozen bloodworm anglers ever and as a sweetener, I named him in the squad. While its hardly fair to give someone only five minutes to choose from hundreds of possible candidates, the side he selected would, I think, take some beating. In no particular order, Simon’s selections were:

One of Simon’s proudest achievements was being part of the Silstar Izaac Walton Team who won the Division One national in 1991 in which 86 teams lined up. That match was fished on the Trent & Mersey. Individually, the canal legend Peter Hargreaves pegged on the first swim below Common Lock at Fradley, romped away with the title landing a catch of 14lb 8oz 4 dr. In the team stakes, the Preston based team scored 823 points, ahead of Dam Starlets and Carthy’s Alrewas. It took Simon less than 30 seconds to recall the team of 12 who lined up that day; these being Dave Roper, Alan McAtee, Dave Brogden, Paul Hughes, Liam Green, Roy Meredith, Alan Mayer, Dave Bass, John Croasdale, Danny McGuire, Andy Davies and Simon Nickless. Simon admitted that he had lost count of the exact number of nationals he has fished but he estimated its getting on for about 20. 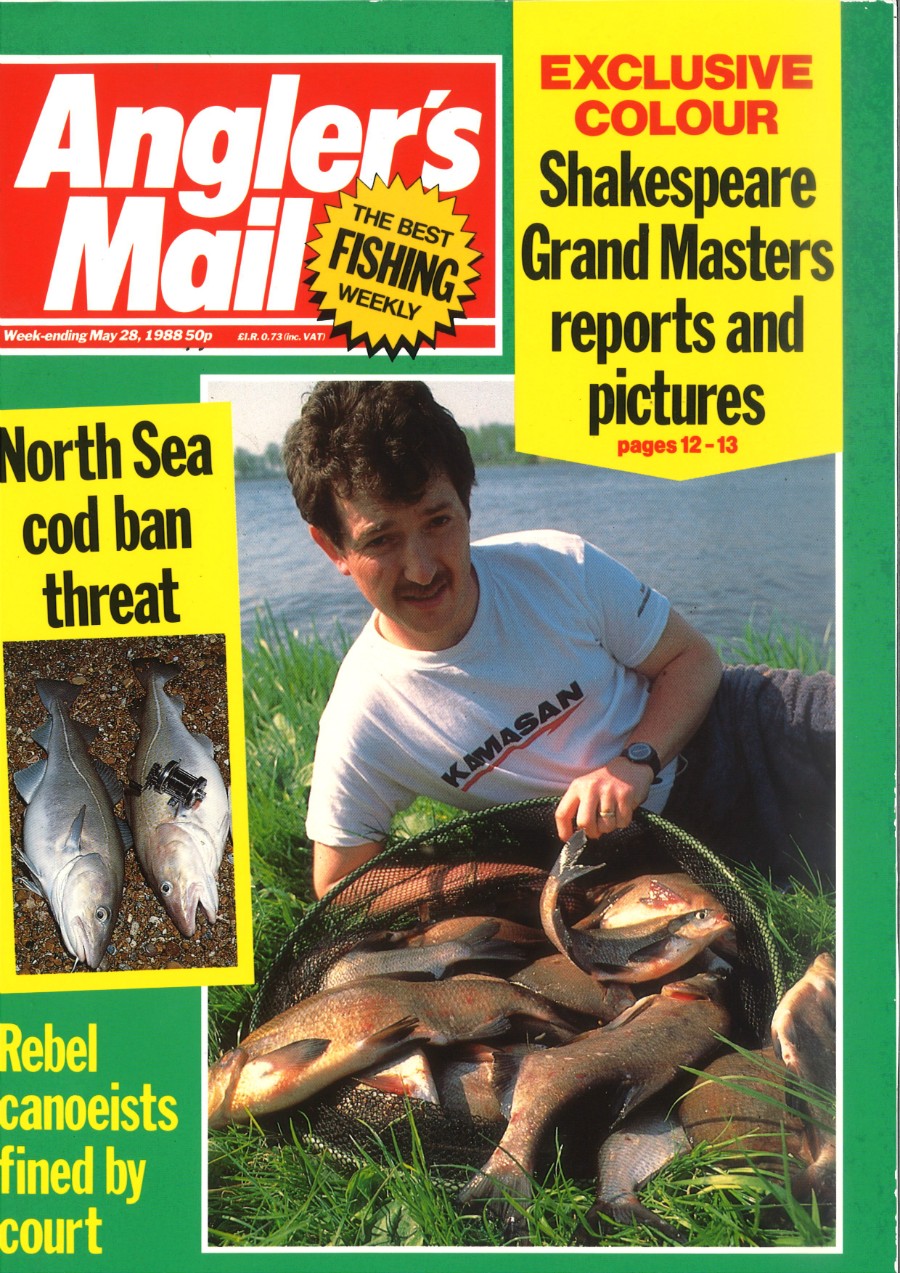 Arguably Simon’s greatest achievement was his victory in the 1987/88 Kamasan Matchman of the Year competition. In 1986, the competition comprised 72 qualifying matches and a semi-final leading to a six-man final in Southern Ireland in October. Winner of the £1,000 cheque was Richard Borley (ABC), beating other finalists Wayne Swinscoe, Dave Brogden, Tony Mardle, Rod Hill and Dickie Carr with a weight of 15-9-0 of perch, roach and skimmers. In 1987/8 it was back to a straight points race with the competition open to 60-peggers and giving winning anglers five points for first spot, four for second and so on down to one point for fifth. Simon, fishing for Coventry Safeweight, scored 67 points to hold off travelling partner Dave Berrow who ended the season with 59 points. Another great canal angler, Mark Pollard ended up in third position on 51 points. Simon was the fifth man to win the title, joining the previous winners, Dave Thomas, Billy Makin, John Dean and Richard Borley. 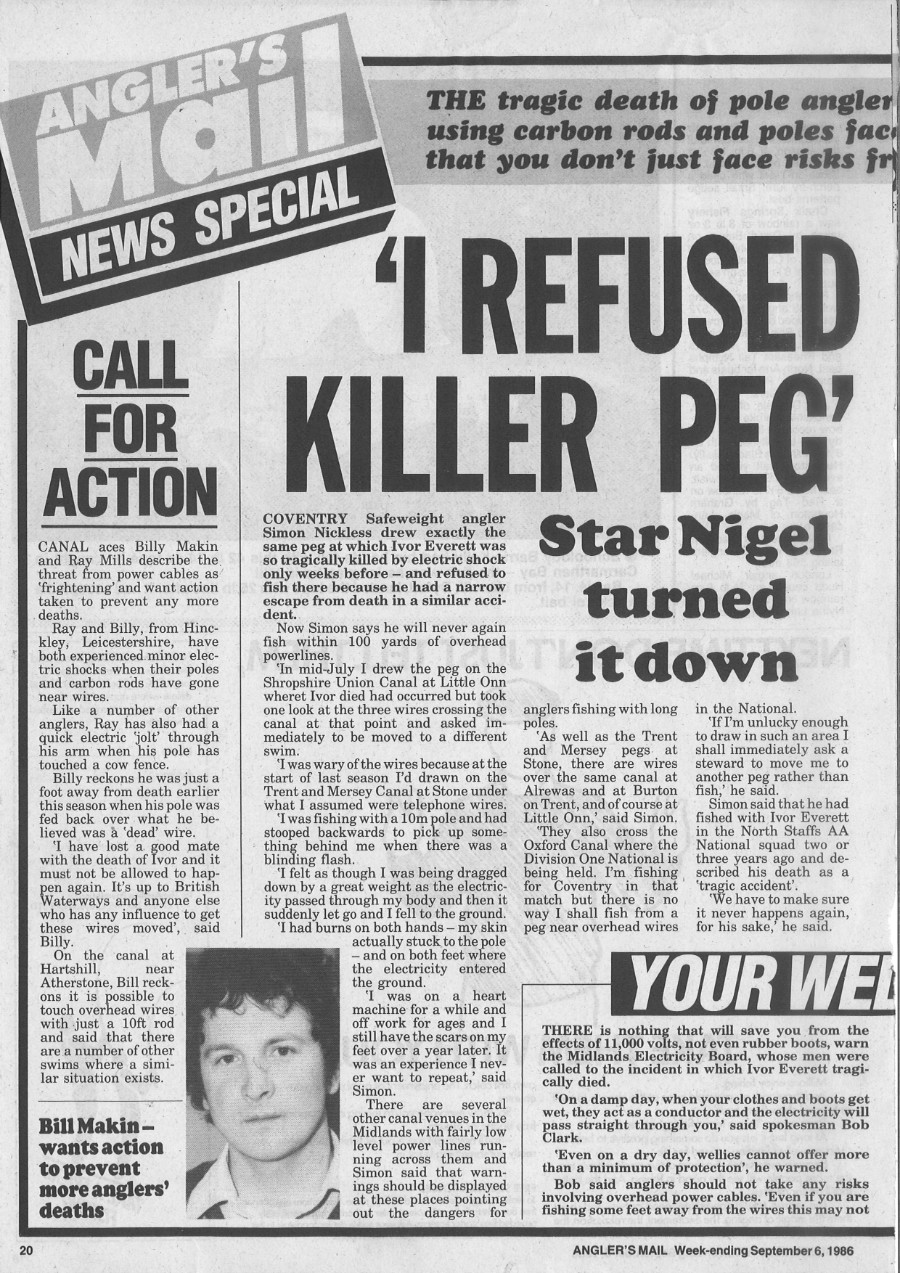 I was in for something of a shock when Simon revealed he has diced with death on 17 June 1984. Simon was pegged under overhead powerlines on the Trent & Mersey at White’s Bridge Lane on a Thursday evening Stone AC open match. His pole didn’t touch the 11,000 volt cable but arcing occurred and the result was that Simon was thrown over the towpath hedge. Despite burnt hands, and the fact that his socks melted to his feet, he carried out fishing for some number of minutes until the shock really set in. Mark Branson was on hand to take Simon to hospital. Luckily, although you can see the scars, it’s fair to say that Simon got away with it unlike fellow angler Ivor Everett who was tragically killed at Little Onn on the Shropshire Union around that time. When not long later, Simon drew the same peg where Ivor had succumbed, he quite rightly refused to fish and asked for a re-draw. 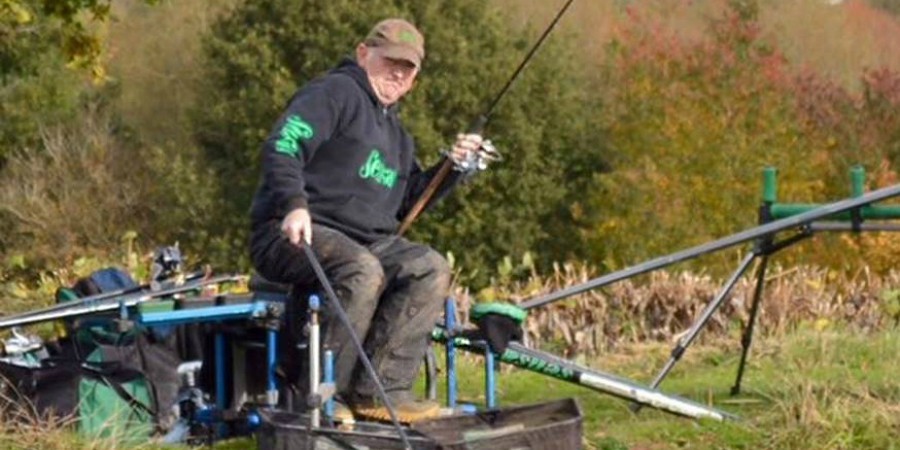 While Simon had no difficulty in reeling off the 1991 Silstar Izaac Walton team, pinning him down to naming his favourite single canal venue was more of a challenge. After all, when you have been in the frame on more than 30 different venues there are so many happy memories to take into consideration. But eventually he plumped for the Shropshire Union. Simon is very much looking forward to August’s big match and what promises to be a very open national with perhaps 20 teams feeling they have a genuine chance of glory. Who would bet against Simon being in the winning team again?