Jim Baxter continues his series on the top 12 waggler heroes. To many Trent fans, the inclusion of John Dean will come as no surprise, as he's an automatic choice as a float angler for any team of 12.

If I were to pick one angler to catch a fish to save my life, I’d choose him without a second thought, especially around the year 1980 when at his peak.

Decade at the top

He had a short career at the top, lasting not much more than a decade 1974-84, but in that time he ruled the Trent, not to mention other waters, anywhere in fact that he could find a roach shoal willing to feed. Without really trying for it, he forced his way into the England international team while building up an awesome winning match record, but most would agree that he fished all too briefly for his country. I’m talking of course, about the great John Dean, from Selston, Nottinghamshire.

The remarkable thing about ‘Deany’ as he’s popularly known, is he not only finished his match career far too early, he began match fishing comparatively late. Other greats have competed successfully in National championships by their mid-teens – Kevin Ashurst, Ivan Marks and Johnny Moult spring to mind, but John had not even fished a match before he was 19¾, though he rapidly made up for it once he got started.

His match debut was in November 1963 with the Horse and Jockey AC, Selston, and he recorded 12oz to finish nowhere. A week later he again caught just 12oz for nowhere. But in better conditions on match three he weighed 6lb 10oz to finish second, then to kick off 1964 in style he won his first match on 19 January with 3-6-10. He was just 20 years old and learning fast.

In his next seven matches, bear in mind this was still winter, his lowest result was a fourth along with three wins: 3, 4, 1, 2, 2, 1 and 1. I’d call that classy, a sign of things to come. At this time John recalls he was fishing a small balsa float in the style of a Nottingham match legend of the time, Jim Sharp. He’d met and talked to Jim in his local (Tom Watson’s) tackle shop. Suddenly, this modest young man had quickly compiled such dramatic results that any Horse and Jockey member must have dreaded drawing near him.

On yer bike round Ripley

John’s father, Charles, did not fish, and he first had to pester him to take him fishing when aged 9 or 10. The eldest of three brothers, as soon as he got the fishing bug, John would cycle to his local Codnor Reservoir on many summer evenings, also learning his trade at Butterley Reservoir. Set within what’s called the ‘golden valley’, John remembers difficult Codnor for the clarity of the water and its fair depth, deeper than it is today. He told me how it was so clear he once saw a perch inspect his worm bait before shying away, only to return 20 minutes later and take it readily.

I first met John when drawn below him on the River Witham in 1974, on a day of torrential rain in the Lincoln’s Tom Sails Memorial match. I was a cocky 24-year-old and John, who "normally fished Trent club matches" he told me afterwards, was dressed in a Barbour jacket. I thought I knew the danger men on the river at this time, but this new guy was not among them. Error of judgement!

I forged an early lead over John but in the second and third hours he flew past me with a succession of chunky roach from mid-river. In the last two hours the river rose quickly and coloured up badly with the rain, and nothing fed at all. But John’s two-hour burst gave him a near 5lb catch, enough for 6th in the match (from a 250 entry), compared to my paltry 1lb 9oz.

I looked back at that match years later and realised John had done me a huge favour. He’d used a big waggler to fish midstream where I did not have a float in my box big enough to boss the conditions. In the same match a year later, I managed to take fourth from 275 entrants with 6lb of fish, one of my best results at the time, and it was all down to fishing more positively based on the lesson John gave me. Little did I know that John had pooled ideas for fishing the Witham with friends from Ripley in a four-man team, and he was to carry on consistently doing well on the river for two seasons, framing highly in the big opens of the time without actually winning one. 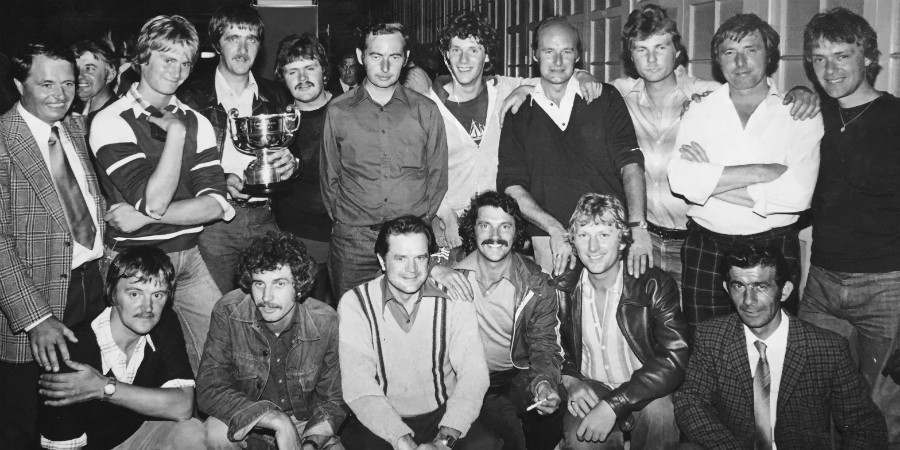 However, he then switched his main attention back to the Trent, joined the famous Notts Federation, alias Trentmen team, and the rest as they say is history.

If I were to pick a match where John probably started as favourite to take the top weight of what has always been regarded as their finest victory, it would be the 1980 Notts Fed side that set the points record for the Division 1 National. On their home water, the Trent from Nottingham down to Newark, they amassed a magnificent 883 points to romp away with the title. Almost all the team delivered by finishing in the top 10 of their 80-man section, but to no-one’s surprise, John was their only section winner that day for a maximum 80 points in section L.

Importance of hook sizes and patterns

Back in the mid-1950s a size 14 or 16 hook was a common size, but experimentation taught John he’d get many more bites with a size 20. And the small hook lesson would indeed pay off later on. A favourite hook for John’s Trent matches was the Mustad 90340 in sizes 20 and 22, but he was also fond of the 1206D which had a gilt finish. With this he would sometimes fish a matching yellow maggot as a change colour from bronze. And he would always add turmeric to his Dorman’s ‘donkey maggots’, famously big maggots used by all the Nottingham team and bred by Terry Dorman at his maggot farm.

This is part of what John’s friend, business partner and top angler in his own right, Col Perry said about him in my book, ‘The Rising Antenna – a waggler man’s journey’. It’s just one anecdote but it tells a familiar story that I’m sure would make others shiver at a similar memory:

"I remember fishing the Trent for about three hours one day and catching well. I probably had caught 25lb in this time and thought I would have a sandwich and walk up to John who was just round the bend upstream. As I walked I was thinking how well I had done and feeling quite self-satisfied. I sat behind John chatting however, and after watching him for about 15 minutes he was obviously ‘emptying’ the river. Fishing three to four rods out, changing between stick and waggler, he was catching chub and roach one after another. I ended with about 40lb-plus to John’s 80lb-plus. It underlines why, despite his short match career, everyone remembers him. Totally outstanding, I have nothing but complete admiration for a fabulous angler – a genius and for me the best."

Other highlights of John’s career:

Master of the Trent

John’s idea of angling paradise is fishing Burton Joyce or Shelford on the opposite bank when it was a match mecca back in the late 70s/early 80s. That was when he had the Midas touch: he was simply a winning machine. He was the man who emerged from early struggles in the golden valley to become a true waggler wizard, and conquered the Trent like no other before him or since.

Read about another waggler hero

Brought to you by Jim Baxter, meet all 12 anglers he considers the best ever waggler fishermen