There are several similarities between Yorkshire born Arthur Ransome and another of our chosen greatest angling writers, Denys Watkins-Pitchford (BB).

No man who has ever travelled with a fishing rod finds himself able to travel happily without one.

Both men had poor eyesight and were unathletic, except when it came to fishing; BB taught at Rugby School; Arthur was enrolled there as a pupil. He didn't enjoy it, though he lived in the same study room that had been used by Lewis Carroll. Both wrote several books for children that often featured fishing. Both won the Carnegie Medal for their writing, and both received royal recognition. (Arthur was awarded a CBE in 1953, BB an MBE in 1990.)

But while BB never moved much out of his native Northamptonshire except for a spot of travel, Arthur enjoyed a far more exciting life. In 1913 he went to Russia to study Russian folklore and became a foreign correspondent, covering the First World War and the Russian Revolution. He became close friends with a number of its leaders, including Lenin and Trotsky. He also met the woman who became his second wife, Evgenia Shelepina, who was Trotsky's personal secretary.

He provided information to British officials and MI5, which gave him the code name S76 in its files. Diplomat and fellow agent Bruce Lockhart wrote in his memoirs: "Ransome was a Don Quixote with a walrus moustache, a sentimentalist who could always be relied upon to champion the underdog, and a visionary. He was on excellent terms with the Bolsheviks and frequently brought us information of the greatest value."

Arthur got into fishing, aged 10, through the postman at Goldalming, Surrey, who took him fishing on the river Wey. He caught two roach and fished in rivers, streams, lakes and the sea for the rest of his life. At the age of 76, he caught a 7lb salmon on the river Derwent at Cockermouth and he fished for trout right up to his death in June 1967.

In his autobiography, he wrote: "No man who has ever travelled with a fishing rod finds himself able to travel happily without one."

From an angling perspective, he is perhaps best known for developing the elver fly for salmon fishing, Arthur was just as happy fishing for perch  with a worm, spinning for pike or writing about the fly-fishing bag of a Cromwellian soldier.

Arthur's first book was ‘The ABC of Physical Culture’, written when he was just 20 and he quickly acquired a reputation as a literary critic, writing books on Edgar Allen Poe and Oscar Wilde (though the latter landed him with a libel suit).

He is probably best known for his series of ‘Swallows and Amazons’ children's books, which he wrote after moving back to the Lake District in the 1940s. There's a fair amount of fishing content in the books.

The series, which includes catching a big pike on the Norfolk Broads and trout in Lakeland streams, was illustrated by line drawings that Arthur drew himself.

The stories, based on a group of children whose family were close friends, was "about the sort of childhood that he had longed for but never had", said his biographer Hugh Brogan.

Arthur had been offered the job as foreign correspondent of The Guardian when he returned from Russia, but decided to make a living from full-time writing. He never looked back.

He loved fishing books and in 1955 published a reader's guide to angling books. When he died, his library was mostly sold to a university library, and it included six fishing books in Russian!

His most famous – and finest – fishing work is ‘Rod and Line’, published in 1929 and taken from columns that he wrote for the Manchester Guardian, of which he was its first fishing writer. It is a wonderful mixture of all aspects of angling, covering from advice to beginners to the delights of a tackle shop. Here's an example.

"There seems to be a mistaken belief that the centre of a town is some town hall or public library, or square decorated with political gods in stone or bronze. If the truth were known, the whole town is grouped about some little shop where a man will find, in the window, boots and pike tackle, mayflies and flat-irons, and behind the counter a fisherman like himself."

He writes with verve, warmth and humour, conveying better than almost anybody the sheer excitement of fishing.

Another book, ‘Mainly about Fishing’ was published in 1959 and again covers a rich vein of subjects, from why there is a spelling mistake in some first editions of Izaak Walton's 'The Compleat Angler' to "a cursed banker". It also relates how he developed the elver fly for salmon, likening salmon taking a fly in freshwater to Americans chewing gum!

Two other fishing books that he schemed never saw the light of day. One was to be called ‘A Plague of Flies’, on the history of ancient and modern flies. It was to be illustrated with coloured photographs of the flies, but colour-printing technology in 1944 was not up to what Arthur wanted to achieve.

He also started to write a historical fishing novel to be called ‘The River Comes First’, set on the river Bela in Westmorland. But his wife Evgenia, who read everything he wrote and was his fiercest critic, disliked the early sketches. So Arthur put the book aside and never picked it up again.

The famed historian AJP Taylor wrote of him: "Arthur Ransome was one of the most attractive and gifted literary figures in his time." He was also one of the greatest and most entertaining fishing writers of all time. Decades on and 50 years after he passed away, his writing is still captivating. 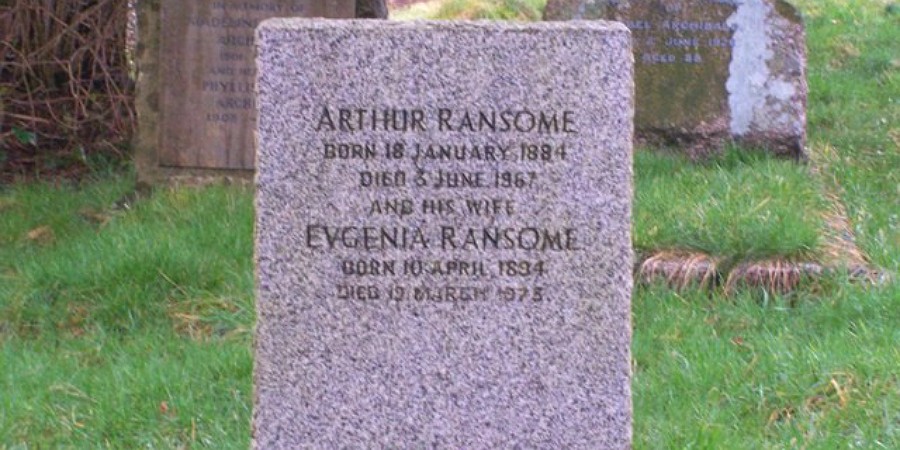