Well here we are, slap bang in the middle of the 'old' close season period that used to extend from 15 March to 15 June inclusive. From March to June, broadly speaking, we can continue to fish still waters, lakes, canals and some canalised river sections, excluding those designated SSSIs (site of special scientific interest).

Many years ago, a survey was undertaken by the National Federation of Anglers about anglers’ views on the close season. At that time my reply, as far as I can remember, was purely personal. A close season not only gave the fish a rest but me also, as well as the bankside vegetation, flora and fauna. My wife also benefited by having the garden sorted out as well as rooms in the house decorated before the 'glorious 16th', as it was always called.

Well that was before I retired. Now it's a different ball game because I have time all year round to garden and decorate. Holidays of course always take second place to fishing and need some negotiation and delicate manoeuvring to ensure no important angling outings or matches are compromised.

Maybe it's my failing memory, but years ago I always yearned to fish in April and May. I thought the weather would be kind and fish even kinder. Five years of retirement have taught me differently. The spring weather is fraught with alarmingly cold snaps, too many April showers, odd warm spells and some indifferent fishing. To be fair I have caught my share of good fish but in the interests of fish welfare, I never use a keepnet unless I am in a match. I can't see the point in using one on club waters. Slipping those fish straight back into the water via the landing net doesn't seem to affect the number of fish caught - but of course I can't tell one way or the other. 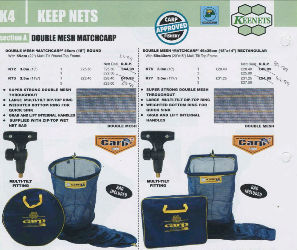 What I can say is that I am quite comfortable with this practice. I tend to take less gear when pleasure fishing, hence another reason for leaving that bulky keepnet stink bag at home. Another good reason for not using a keepnet means the chances of spreading the carp virus KHV is significantly reduced. Unless anglers are taking part in a match, many commercial fisheries have a 'no keepnet' rule, applied by the fishery owners.

Talking about keepnets I will take at least four to all matches on our Age Concern summer commercial fishery outings. The club operates a 60 lbs carp net limit. That ensures the fish aren't too cramped in these modern keepnets and, if they are biting well, we 'senior citizens' can at least lift the keepnet for the weigh in. All silver fish and carp under 2 lbs are kept separate in another keepnet.

It is not easy to judge when the 60 lbs limit has been reached so it's best to try to stick to around 50 lbs or so. Therefore, if we have a good day with weights in excess of 100 lbs, a minimum of three carp nets plus the silver fish net are necessary. With wear and tear taking its toll I usually buy at least one new net every year and discard the one in worst condition. That all sounds a little blasé doesn't it? But that's how it is today on commercial carp fisheries.

Early history of the keepnet

Let's step back a hundred years and look at keepnets then. To be strictly accurate, there were no keepnets. Most anglers retained any bigger fish, taking them home for the pot to supplement their meagre food supplies. The standard practice in matches was that all fish caught were killed, pending the anglers return to match headquarters for the weighing in. The use of keepnets would prove to be a considerable help on poorly stocked waters, especially canals, where winning weights were often measured in ounces rather than pounds.

Dip in form on the Trent & Mersey

In 1910 on the Trent & Mersey Canal at Willington, the annual competition fished by 12 clubs in the Castle Ward carried a top prize of a 25-guinea trophy. Hosted by Derby Angling Association, the match was a roaring success with the winner taking a massive 2½ ounces and 4 shot. Let me explain. As catch weights were infinitesimal, to ensure the greatest possible accuracy lead shot were used as additional weights. In 1911 a match on the Tamworth Canal (Birmingham & Fazeley) fished by fifty competitors, was won by an angler who landed thirty six fish for just 22 ounces.

It is thanks to the National Federation of Anglers that the use of keepnets began to spread across the country. At the NFA 1909 Annual Conference, Bill Fox of Sheffield Amalgamated proposed that 'All England' competitors use a recently designed a keepnet by Tom Redford of Bolton, to retain fish alive for the weigh in. At the time it found scant support. Notwithstanding during the 1912 NFA Conference, held at the London Holborn Restaurant, members passed a new rule ‘that all fish, be kept alive, if practicable’. The keepnet practice slowly gathered momentum, allowing all fish to be retained, weighed and returned to the water. 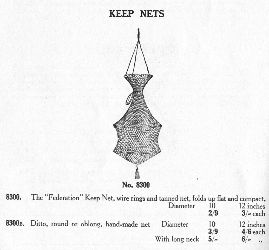 Given the poor match results at the turn of the twentieth century it is no surprise to find the original keepnet design wanting. Adopted by the NFA and advertised as the 'Federation' keepnet, these compact, fold up keepnets appeared in just two diameter sizes, ten or twelve inches (25 to 30 cms) and were only one ring deep with a longish neck and a pull cord, presumably used to tighten the top to prevent fish jumping out. Progressively, the length increased until in the 1930s keepnets were manufactured up to one yard deep, but still woefully short of modern requirements. Over many years the old River Boards, the National Rivers Authority, the Environment Agency, fishery owners and keepnet manufacturers have worked together to produce the fish friendly range of keepnets we have today.