The 1963 All England National

After the 1937 All England Championship, 26 years were to pass before the National Federation of Anglers held another canal-based championship match.

On Saturday 14 September 1963 the 48th National Angling Championship was fought out, with the venue once again being the Gloucester & Berkeley Canal. In the old style pre-division championships, this was only the second match held on a canal venue, and the same one at that. The very same swim fished by 1937 champion Harold Jones (County Palatine) would also produce the 1963 individual winner. 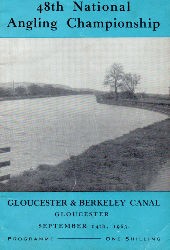 The 'Midland Angler', a national angling newspaper, previewed the event with the headline "Will the Berkeley Canal be an All England Nightmare?" Well, sadly, it pretty much was!

For a change the organisation was perfect, the setting wonderful, but regrettably the fish went missing for the occasion. The weather on the day was clear, with bright sunshine and no wind after a long cold spell.

The National Federation of Anglers had arranged for the closure of the towpath for the match duration, though odd sections could be observed from the opposite bank. Few fish were inclined to feed and those that did were on or near the surface. The match of the year became a non-event for competitors and spectators alike.

In the ‘swinging sixties', competitors were still not allowed to wet groundbait, wet a line, plumb the depth or disturb the water until the start had been signalled. Catapults could not be used either, that rule finally being changed back in 1972. Only one rod could be set up.

On the day, the formbook was turned on its head as all the top teams struggled. In K section, competitors were at the mercy of an army of flying ants drawing many fish up to the surface for a feeding frenzy. A wily angler or two put an ant on the hook, all to no avail. 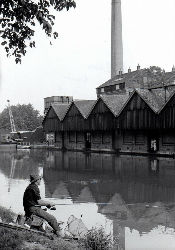 Prior to his championship win, Roy had never won anything other than a club match. Just as Harold Jones had done in 1937, Roy fished shallow, just three feet deep with a single maggot on a size 20 hook, taking mostly small roach in the 2 to 3 ounce bracket. His bet of ten shillings (50p) each way at odds of 800-1 brought him winnings large enough to pay off his mortgage or buy a new car.

Maurice Taylor of Spalding Fishing Club finished up with 10-9-0 for second place and third was Scunthorpe’s Ted Franklin close behind with 10-7-12. Ted was drawn next peg to the winner.

These three anglers were the only ones to break double figures. In the fancied Frampton section, pegs 8 to 13 produced the top three individuals plus 7th, 12th and 16th places.

Giant killers Northampton Nene Angling Club, who are one of Britain’s oldest angling clubs, took the team title with a winning weight of 19-11-8, the lowest aggregate total for 29 years. With no section winners and their highest placed man, Dennis Jelley, ninth in the individual list with just 5-13-8, it seemed impossible for them to win, but win they did. Their tactics were simple. Jelley’s instructions were, "Fish close to the near shore on the bottom and on the ledge." Six of the team topped the pound mark.

Liverpool & Newark in the frame as North Somerset miss out

Liverpool and District were in a similar position to the Nene. A Perry secured tenth individual place with 5-6-12 and again, Liverpool had no section winners but they just missed out, trailing Northampton by just 4 ounces. Two or three more small roach and they would have been champions.

Newark and District finished off the top three with a total team weight of 18-12-8 to take the Peer Groves Trophy. The remaining 11 anglers of North Somerset and West Wilts team could only add a further 3lbs to Roy Sims' weight and so unfortunately they finished up in sixth slot, just out of the top awards.

Cream rises to the top

Five of the 12 sections were won by well-known top-flight match anglers. Clive Smith, then fishing for Redditch and later to captain the great 1970s Birmingham Anglers team, John Sherwood of Worcester, Kevin Ashurst fishing for Warrington, Bradford City’s Les Stanley and Ernie Wilde of Rotherham. Kevin drew really well on a peg near to Splatt Bridge, but once the word got around that he was catching, a horde of spectators crowded on to the bridge and this scared his fish.

Ray Stubbs and John Booth, both 14 years old, turned out for the North Staffs team. They were thought at that time to be the youngest competitors in national history.