One of angling's greatest ever characters was Cambridge’s Percy Anderson. The fast-talking, cigar-smoking showman won fans and matches wherever he went.

Percy Anderson (left) with one his trademark cigars

King of the Cam

Sometime around 1964 Percy Anderson formed two match teams of four, who were nicknamed 'Percy’s Pimpernels'. These anglers dominated the local matches and Winter Leagues on the Cam and Old West rivers. It is on record that members of Percy’s teams won up to 40 matches on the Cam.

Legend has it that Percy would deliberately delay his arrival at Clayhithe Bridge by parking up on the opposite side. This would allow all the other match entrants to 'pool up', believing that Percy was giving the match a 'miss'. Two minutes before the draw started, Percy and his brothers would turn up.

In 1970 he won the 200-peg sell-out Waterbeach Charity Open on the Cam with 25-3-8, using a loaded slider float justifying his nickname 'the King of the Cam'.

Like all the great anglers Percy was a brilliant all-rounder, winning many more matches including the Cartwright Cup on the Cam, the We Three Trophy, the Wilmore Bowl on the Middle Ouse, the Shipstones on the Trent at Newark, the Littleport Open on the Ouse, plus matches on the Witham, Relief Channel, Welland and more.

Representing England on the international stage

Percy fished for England in the World Championships on the Mincio Canal, Italy, in 1971 alongside Dave Dowcra, Frank Howse, Ian Roffe, Wally Davison and Bill Clarke. He took 111 fish for a total of 530 grams and 11th place in his section. Percy went on to represent England at a number of other international matches, recording an individual win in the 1977 European Championships. 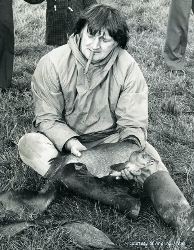 Percy became the Division 1 National Angling Champion on an un-cooperative River Welland. He fancied his draw at permanent peg 382 on the straight near the pump house, above Four Mile Bar footbridge.

Percy immediately introduced six to eight balls of groundbait laced with worm and caster on the normal bream line three quarters over. However, when anglers were near him, including the great Steve Gardener who finished eighth, they lost bream.

Percy switched from the float to the leger using three worms and two casters. He used the old angling trick of 'plucking' the bait to entice those shy bream to feed. Percy caught consistently until the end of the match, to finish up with 15 fish for 40-2-8.

The Angling Times headlines for 2 October 1974 said it all, "Happiness is Cigar-Shaped", a reference to Percy's trademark Havana cigar. "The beaming smile and huge cigar said it all. Percy had won the National. And there was one thing every angler agreed on – it couldn’t have happened to a nicer bloke."

After weighing his National-winning catch of bream, Percy, who was by that time freezing cold in the strong cool breeze, quipped to Bob Feetham, then Editor of Angling Times, "Bobby boy, I want your coat." Bob duly handed him his coat and never got it back. Photos after the match show Percy with that famous coat and it started a yearly trend where the Angling Times awarded an 'Angling Times Coat' to the individual winner, much like the green jacket at golf's Masters tournament.

Percy’s win was tinged with disappointment. His great friend Ivan Marks was on international duty in Ghent, Belgium. "Had he been there he would have put his arms around me and said well done," quipped Percy. As Cambridge Fish Preservation Angling Society captain, he was equally disappointed that his team did not win. On his arrival home Percy partied so much he had "a bad head for two days".

All round sporting prowess

Percy took up the sport utilising a willow stick, a length of catgut and a bent pin baited with bread. Top Cambridge angler, Bob Parr, coached Percy and he rose through the ranks eventually to international status. An all-round sportsman he played professional football for West Bromwich Albion, Stockport County and Cambridge United, and became a county level player in outdoor and indoor bowls, snooker, pool and table tennis. 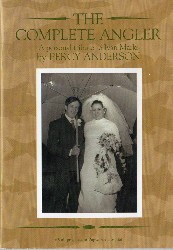 Percy wrote a wonderful series of articles in his column for the Angling Times.

For more than 40 years, he ran junior matches and summer school holiday teach-ins, mainly on his favourite River Cam, but some as far as Denmark’s River Guden.

As Ivan’s close friend and angling road show colleague for 40 years, it was entirely fitting that Percy wrote 'The Complete Angler' in 2005 as his own personal tribute to Ivan, who passed away in 2004. The little booklet is a collector’s gem. All the proceeds went to the Papworth Hospital.

Featured in a 1972 Angling Times match special extra 'Where the Money Is', journalist Peter Maskell described Percy as follows: "He’s the Cassius Clay of the angling world – fast-talking, loud and full of confidence. The Cambridge born tackle dealer and self-styled 'King of the Cam' is one of the men responsible for bringing a touch of glamour and showmanship to the circuit."

Upon Percy's death in 2006, his ghost-writer Tom Legge, who worked so closely with him on the production of the 'Complete Angler', said, "Percy was an angling giant with a personality to match. The sheer number of kids he inspired over so many years defies belief, and his passing leaves the whole sport poorer."