Some readers will never have heard of JW Martin, let alone his pseudonym, the 'Trent Otter'. It is perhaps a rather dubious nametag given the current controversy surrounding otter predation on some game and coarse fisheries.

JW Martin's 'nom de plume', acquired as early as 1882 when his first book was published, stuck with him despite the fact he only fished the Trent for 13 years – so he must have started sometime in the early 1870s.

When you read the works of 'Trent Otter', his enjoyment, experiences and knowledge leap out from the pages. It’s just as if you are there, on the bank, fishing alongside him at the turn of the 20th century.

Today we can only wonder at his fantastic catches, interesting stories, fascinating reminiscences and wonderful experiences. Martin belonged to the late Victorian and early Edwardian era, living through one of the greatest periods of invention in fishing tackle (present day excepted of course). You won’t find his name in the record books, either for match fishing or for big fish, but he was a giant of the angling world.

I’m of the opinion that John William Martin was born an angler, much like Jim Bazley and latterly Dick Walker, Peter Stone, Billy Lane and Ivan Marks, to name just a few of the true greats the sport has produced.

Born in the Lincolnshire Fens, a former canal boat boy, farmyard help, bricklayer’s labourer and blacksmith’s assistant, JWM learnt much about life. He was not well educated by today’s standards and in his books always made excuses for his lack of learning, but you would never have known had he not told you.

Date unknown, he apparently walked from the Lincolnshire Fens to start afresh in Newark. He soon became an accomplished Trent angler, learning much from the wily 'old' Trent anglers like Charlie Hudson (the old Dunham professional) and 'Nottingham' George Holland. JWM became an institution, fishing alongside Jack Bailey (son of William Bailey), David Slater (the Newark reel maker), Henry Coxon (inventor of the Aerial reel), and FWK Wallis (joint holder of the barbel record in the 1930s).

Bearing in mind the mode of transport in JWM’s heyday was either train or horse and carriage, he wrote, "During 46 years I have roamed 16 counties, have cast my lines in the waters of 25 rivers, and have seen much to instruct and very much to interest." 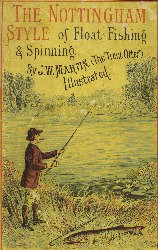 Fishing in the 'Nottingham Style'

An early book by Martin is 'Float Fishing and Spinning in the Nottingham Style'. What for goodness sake is the Nottingham Style? Well, quite simply it was, and still is, 'trotting the stream with a good centre pin reel', a method  that specialists and enthusiasts are returning to in great numbers.

Martin described it thus, "Long casting with a short rod, a fine silk line, and a rather heavily shotted tackle, the bait tripping along the bottom or nearly so: and every inch of water searched by the bait."

Few words but beautifully and accurately described. He elucidates further about fishing on the drop and holding back, styles that are sometimes attributed to Benny Ashurst in the 1960s.

Around the 1880s he set up a fishing rod and tackle manufacturing business at 4, Northern Buildings, Lover’s Lane, Newark-on-Trent (yes it was in Lover’s Lane). Modern references show him in partnership with a man called Openshaw. JWM later moved to Huntingdon and so became more famous for his exploits on the Ouse and the Fens.

More books followed with amazing titles. 'Days Amongst the Pike and Perch', 'Roach and Bream Fishing in Many Waters', ' My Fishing Days and Fishing Ways', the 'Trent Otters Little Book on Angling' and 'Practical Fishing for the So Called Coarse Fishes.'

A successful fishing tackle inventor, JWM eventually moved to London around 1900. He set up a tackle shop in Seymour Street, Euston Square, which had to be closed in the early days of the First World War due to his son joining the army. Unfortunately the Trent Otter's untimely death followed on 23 March 1915.

Long after his passing, Hugh Tempest Sheringham, himself a great author, wrote a few 'in memorium' notes as a short introduction to the reprint of Martin’s 'Coarse Fish Angling' by Jonathan Cape in 1924.

"The Trent Otter was one of those rare men, who without help from circumstance or early education, reach the heart of their fellows because they have a message to deliver. The author's sentences ring true and they say exactly what needs saying, sometimes with a beauty of thought and expression, always with the grace of a kindly disposition showing through."

Warmth and expression, close to nature. Few words but much said.