In his latest article, our angling historian John Essex takes a nostalgic look back at Christmas gone by.

Christmas is coming; the goose is getting fat,

If you haven’t got a fiver, a pound will do,

If you haven’t got a pound then God bless you! (and John Ellis)

The words aren’t quite right, as some of you well know, but that’s a liberty I think I can take at Christmas. When I was a young lad his little ditty, or something close to it, was my father’s festive season favourite especially when the Christmas pud and rum sauce appeared on the dining table. The scramble for the hidden silver sixpence was on! 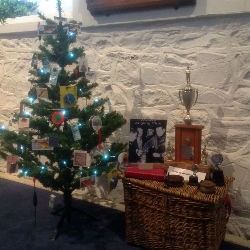 This year the local Church of St Peter and St Paul held a Christmas Tree festival. My local angling club Wreake A C were approached to set up a themed tree. It was a fishing based tree, adorned with old hook packets, line spools, fishy cigarette cards, gaudy floats and the odd trophy or two topped out by a golden devon minnow. In all, more than forty themed trees adorned the church. The whole community benefited from a wonderful spectacle enjoyed by schoolchildren, guides, brownies, mums, dads, and grandparents and by those who had taken the time and trouble to set them up.

Tales from Christmas past

A quick browse through part of my newspaper library shows what the angling press thought about Christmas and provides a few clues on social history. Take the Fishing Gazette for December 26th 1930. W R Pape of Newcastle supplied a list of 'anglers Christmas gifts' which included ashtrays festooned with hand painted trout or salmon. They must have been expensive to produce and worth a small fortune today, but definitely not a product that would sell in today’s 'no smoking' politically correct society.

Just the ticket for the girlfriend or wife in the 1930s was a 'ladies hand painted powder box' with fish motifs. You could even have one of these with a roach on it (instead of salmon or trout). Bernard’s of Piccadilly were also on the same tack with 'hat ornaments' made from real salmon flies with protected points. A Unisex product even in those days! 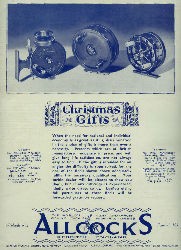 Allcocks advertised the cream of all 'Christmas gifts'. A full-page advert showed their three top reels for what I would loosely describe as Mr average coarse angler. They highlighted the dreadful 'Allcock Stanley light casting reel' and its even poorer cousin the bakelite 'Aerialite swimming reel'.

Third of the trio was the best trotting and spinning reel of all time, the legendary classic 'Allcock Aerial' number 7950. It cost just 50 shillings. That’s about £2.50 in today’s money. If you have one or two to spare I will give you your money back without even a quibble, pay the postage as well and give you some free posh Christmas crackers to boot. But seriously, these can fetch £300-£500 and more, depending upon the model and condition. 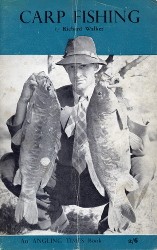 I picked up a 23rd December 1960 Angling Times, which carried a front-page 'Nev' cartoon, a 'forerunner' to the 'Nev' cartoon book that appeared later that decade. The inside front page carried an 'Ideal Christmas gifts for every angler' advert, not surprisingly aimed at promoting books from the AT stable. Amongst them were three Christmas 'crackers'. 'Carp Fishing' and 'How Fish Feed' by Dick Walker are great items for collectors today, fetching up to £50 each in mint condition. The other gem was Ken Sutton's 'Angling in the News' featuring brilliant stories from the early years of Angling Times including the famous specimen hunter versus match angler contest  between Dick Walker and Lincoln's Tom Sails.

That winter the 'Mitre and Keys' Leicester pub team set out on their annual Fur and feather prize competition. Oh for the good old days of the annual Christmas coach outing, often with turkey, chicken, beef and beer as the top prizes. No driving, bottled beer in crates, a snooze on the way home and if you were lucky a 'refreshments' stop at a convivial meeting house (pub to you and me). I don’t suppose many of today’s young anglers have ever been on a coach trip before. They don’t know what they have missed.

Throughout my time I have received some of the most unusable fishing related Christmas presents, and it’s taken me a long time to spread the word that 'fishing' presents are taboo. Just like the 'generation game' host I can reel off my list of 'presents past'. A metal Guinness fishing advertising sign, a DVD set of  'Rex Hunt Fishing Adventures', a  'Muriel Foster’s Fishing Diary', a reproduction salmon painting, an angler's fold up stool, a cuddly toy etc.

What will my Christmas stocking hold this year I wonder?