Eric Marshall Hardy's remarkable little book "Anglers' Ideas", published in 1940 by Herbert Jenkins, is a catalogue of clever suggestions on fishing and inventions that never quite made the patent market.

Advice came from a Sleaford angler who suggestion was to:

"Boil some hempseed until it bursts, then pour the water off the seed and save it. Pass the seeds through a mincer and having reduced them to a pulp, mix them with bread and bran, using the hemp water as necessary to get the mixture to the right consistency. This ground bait is deadly."

So here we have crushed hemp and hemp water being used more than seventy years ago.

If you thought line winders only arrived with pole fishing then think again. Wooden line winders have been popular for centuries. A Mr. F Smith of Birkenhead showed plans for making a line winder tohold seven tackles and the whole lot fitted into a fifty-cigarette tin. The reasoning was very logical. Cast winders protect delicate tackles and the seven made up casts allowed quick changes to be made. His last tip was to use rubber bands to slip through the loop of the cast and then secure by placing it over the ends of the winder. That sounds very much like early elastic 'pole anchors' to me.

A number of interesting paste recipes utilized ingredients I thought were fairly recent in their widespread use.  One used bread, castor sugar and turmeric, costing just three old pence from the chemist. The writer said:

Other unusual attractors included sardine oil and vanilla custard powder. At this time the Second World War was in its infancy. In the latter years of the war the United Kingdom suffered dire food shortages so the National Federation of Anglers issued strict guidelines on the use of foodstuffs for angling.

Strict guidelines in the use of foodstuffs for angling

Cage style feeders and bolt rigs are not necessarily the  product of the late twentieth century. These ideas were thought of long before modern carp fishing became popular. An early bolt rig involved the use of a 1/8th inch brass tube and a copper spiral formed into the shape of a spring and soldered to the brass tube. 'The cast or line is then passed through the tube and fixed between two stops, like an ordinary running bullet. Now bait your hook and squeeze a knob of ground bait into the spiral, and you are all set. The ground bait supplies all the necessary weight for the casting, and will be carried right to the bottom near your hook bait where it can do its work properly.'

There is a wonderful idea for a float for shortsighted anglers. This involved cutting a piece of cork from a wine bottle, then burning a hole in the centre with a red-hot meat skewer. The cork disc was attached to the float by a couple of waxed silk lines and the disc painted white. The idea was that when you had a bite the black and white float tip was pulled down through the white disc to the point where the black disappeared. Hey presto - STRIKE!  With a rig like this it is not impossible to see the beginnings of the style that was so devastating in the sixties where anglers fished only a foot deep using unweighted cork rings or bubble floats as self-hooking rigs.

A variant on the above was an orange flat-bottomed balsa tip stuck on to the top a sensitive antenna float. To quote the book:

"When a fish depresses the float the flat base of the tip strikes the water causing a ring which is easily seen and is a perfect signal to strike." 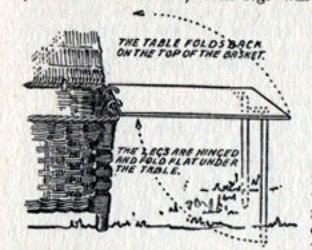 Modern bait tray systems attached to your seat box are not new either. A Rotherham angler’s idea was to make a table from three-ply wood that folded back on itself into the basket for carrying purposes. To quote again:

"It does away with the necessity of opening the basket every time you want another float, new hook link or more shot. Spares and baits are always at hand for the fellow who fits one of these tables."

Could never catch on

There are however, a number of suggestions that could not possibly catch on. One recommendation was 'how to keep your feet warm in winter':

"Procure a rabbit skin or two from a fishmonger. and stretch them on a board, fur side down. Now run three-penny worth of saltpeter and alum into the skin, and leave them to procure for 14 days. Having done this, cut out two sections to fit the soles of your gum boots, and put them in the boots fur side up."

Well need I say more? I think I'll give that one a miss. Thank god for thermal boots.