Hugh was an all-rounder who could never understand why one species was thought to be better than another.

Cultivate your luck... Walk round ladders. Don't start on a Friday. Stir the materials for Christmas pudding and wish. Perform all other such rites as you know or hear of. These things are important in carp-fishing.

Democracy amongst the fishes

This is reflected throughout his writing. On the Kennet, for example, he would fish with a dry fly, then use a float and worm to try for roach, dace and perch.

In his introduction to ‘Coarse Fishing’, one of several exceptional books, he wrote: “Salmon fishing is good; trout fishing is good; but to the complete angler, neither is intrinsically better than the pursuit of roach, or tench, or perch or pike.”

He scorned those who "bestride our streams like a Colossus" and thought of a fly rod as something that all anglers could enjoy, rather than merely the rich and powerful.

John Moore, who completed ‘The Book of the Fly Rod’ after HTS (as he was known to his friends)  died in 1930, wrote: "It was chiefly the humbler angler whom he loved and by whom he was loved in return. They wrote to him in thousands, and received and treasured personal replies in his familiar green ink.

"However overworked he was, he could always find time to tell the unemployed and hungry person who how to catch chub for food. His house was a sort of village committee room, and the study where he worked all day would be turned suddenly into the meeting place for an angling association or a fishing club."

Of dace and carp

One of HTS's finest achievements was to catch five dace from the river Kennet on fly. To catch one over 1lb would be the fish of a lifetime. Sheringham caught five on the same day putting him in the same league as Dennis Flack in the annals of dace fishing. He also landed a 16lb 4oz carp in 1911, at a time when many believed catching larger specimens of the wily fish demanded too much time, and that it was almost impossible to land them anyway. It seems strange these days, reading what he wrote amusingly in ‘Coarse Fishing’ in 1912.

"For practical purposes, there are big carp and small carp. The latter you sometimes hope to catch without too great a strain on your capacities. The former– well, men have been known to catch them, and there are just a few anglers who have caught a good many. I myself have caught one, and I will make bold to repeat the tale of the adventure as it was told in ‘The Field’ of July 1, 1911. The narrative contains most of what I know concerning the capture of big carp. The most important thing in it is the value which it shows to reside in a modicum of good luck."

"To the novice I would say: 'Cultivate your luck. Prop it up with omens and signs of good purport. Watch for magpies on your path. Form the habit of avoiding old women who squint. Throw salt over your left shoulder. Touch wood with the forefinger of your right hand whenever you are not doing anything else. Be on friendly terms with a black cat. Turn your money under the new moon. Walk round ladders. Don't start on a Friday. Stir the materials for Christmas pudding and wish. Perform all other such rites as you know or hear of. These things are important in carp-fishing.'"

HTS was born in Tewkesbury. He won a scholarship to Westminster School and went on to Trinity College, Cambridge, before embarking on a journalism career. (At the time, this was still considered a respectable profession for a Cambridge graduate.) The discipline demanded by journalism, though, honed his writing and he evolved an elegant, witty but informative and entertaining style that is still highly readable today.

In 1903, he met William Senior (Red Spinner), who was editor of ‘The Field’, while fishing on the river Lambourn, and was offered the job of angling editor at the magazine. (What a way to get a dream job offer!) He wrote for it until his death in 1930.

He spent much of his time in the Kennet valley after trout and in particular, roach. He writes favourably about the pleasures of fishing for rudd, roach, chub and dace. In those days, it was highly unusual to rate coarse fishing as highly as trout and salmon fishing. But HTS, though he happily fished with a fly rod, was equally at home with running a float down a river for roach or spinning for pike.

As well as articles, he wrote several books including: 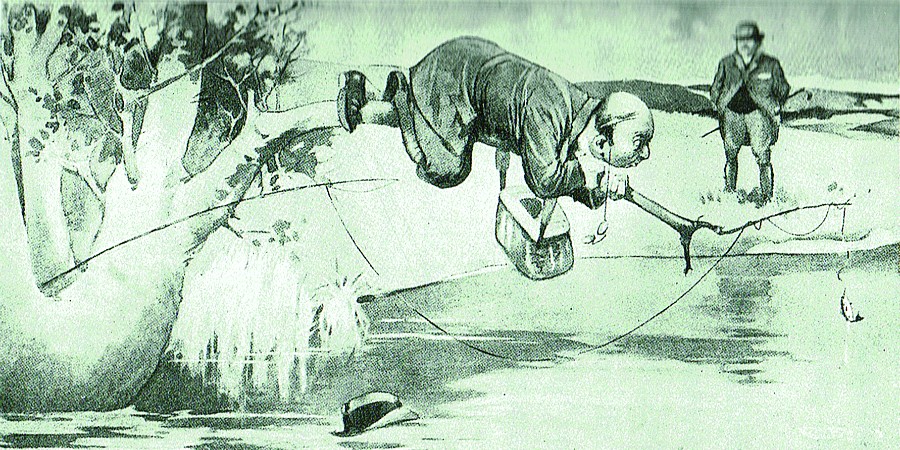 The latter, written in 1925, shows his is his slightly eccentric humour and love of life. Here's a typical example.

"The Carp: This handsome fish was introduced to England by a Mr Mascall in the second half of the 15th century. It is, therefore, at least 430 years old. There seems every possibility of its reaching a ripe age."

He was greatly admired by other writers too. BB chose this quote from ‘Coarse Fishing’ as the introduction to his sought-after work ‘Be Quiet and Go a-Angling’.

Gone but certainly not forgotten

A society in his memory still exists.

The Sheringham Society is a small group of all-round anglers, dedicated to fishing in the traditional style, who “embrace values and attitudes that Sheringham would have recognised and approved”.