2018 will see a number of national celebrations and commemorations to mark the 65th anniversary of Queen Elizabeth’s Coronation.

Among their historical trophies Farnham Angling Society has a 'Coronation Cup' the origins are unknown to the club. It's easy to imagine that many angling clubs and associations are in the same position where historical details for the 'Coronation' matches have been lost in the mists of time. One club who do have records of a coronation match for a previous era are Blenheim Angling Society who held a match in 1902 to celebrate Edward VII accession to the throne in 1902.

The fishery, comprising four lakes, was one of the finest still water fisheries in the Midlands and fishing matches 'open to All England' were fished regularly but nothing on such a grand scale as the 'Coronation Angling Contest'. Thanks to the hard preparatory work of Major Turner, the Estates Agent, and George Peacock of Worksop and District Amalgamated Society the fishery was thought to be in fine form for this angling spectacular.

A special commemorative program for the event captured this period exactly and encapsulates the magical post war era of great angling matches. The ephemeral 44-page soft cover booklet records information about the contest organizers and stewards, the list of prize trophies, plus facts and photos about the lakes themselves but most important of all is the team by team list of top flight anglers from the post war era.

The Worksop side should have been firm favorites. But who were the other possible title contenders? The giant 26,000 member Birmingham Anglers Association, fresh from their triumph in the 1951 Festival of Britain match on the River Thames where they clinched the top team prize and had the individual winner in Ralph Kay were in with a shout.

Missing from the two strong Coventry sides was Billy Lane 'Junior', who became our first World Angling Champion in 1963, but they still fielded the celebrated Harry Wills plus the famous Webb brothers, Rex and their team captain Norman.

Derby AA was represented by the match ace John R Cope, author of 'Mainly for Match Fishermen' (winner of five Trentman badges plus a Trentman shield) and Fred Simcox who finished third and second in the National Angling Championships in 1946 and 1950 respectively.

Now 1953 was also the first year of that new angling publication, the Angling Times, and they showed a marked change in attitude towards the reporting of coarse fishing matches. Under the astute direction of Bernard Venables, the late angling correspondent of the Daily Mirror, and co founder Howard Marshall, the infant Angling Times gave it their best shot with a two-page feature spread of snippets and photographs from the Coronation match. To quote their own write up: "For the first time ever an important angling match has been fully covered in pictures by a national newspaper."

Howard Marshall, the celebrated premier BBC radio commentator, described the 1937 Coronation from inside Westminster Abbey and once again for our present Queen in 1953. He had already achieved 'radio' fame as a pioneering outside broadcast commentator mainly on cricket Test matches and other sporting events. Immediately after the 1944 D-Day landings Howard made an inspiring broadcast from a Normandy beach head. Sales of televisions rocketed as the British public clamored to see the Queen’s coronation as it happened – in black and white. More than 27 million viewers watched in awe at the pomp and circumstance leaving 11 million to listen in on the radio and wonder what they were missing.

At 9.00 am the teams of 12, totaling 936 anglers plus masses of spectators, assembled for the draw on the lawn directly in front of the Abbey. The lakes were spread around the huge estate.

Unfortunately, there were only three single deck buses on hand to convey several hundred anglers to the farthest Carburton Dam and Carburton Forge Dam lakes. When the start rocket commenced fishing many anglers were still en route to their swims while others who arrived late had yet to set up their tackle. Much to their frustration some anglers didn’t leave the Abbey lawn until 11:10 am with the match in theory in full swing having started at 11.00.

This dilemma was recognized by the organizing stewards who sensibly decided to put back the start time to 11.45 am. But this apparently rational decision precipitated an even bigger predicament. Anglers on the Shrubbery Lake nearest to the Abbey had commenced fishing at the original 11.00 am start time so were asked by the lake stewards to stop fishing at 11.30 and return their catches. Those anglers who had caught fish were none too pleased.

Early rain was prevalent for the first part of the match followed by odd glimpses of the sun and squally winds which caused a distinct chop on the 89-acre Great Lake making it extremely difficult to fish. Mostly small roach and perch were taken in the first two hours then suddenly at about 1.30 the bait-shy fish really went off the feed resulting in few being caught during the last two hours. On the Great Lake with only a foot or so of water and a very weedy bottom, catches were disastrous for nearly 400 competitors many of whom remained fishless. Horace Seed, Kenny Kendall, Bob Fuller and Wilf Rockley all suffered the same fate.

Leeds angler Norman Seal caught fish throughout the day using a 'Severndale' rod and his Leeds 'Aerial' style centre pin reel, made I understand by Arthur Crompton and distributed through Kenny Kendall. Pegged on the seldom fished Shrubbery Lake close to the water run-off to the Great Lake, Normans swim had both depth and movement. It wasn’t too long before a large crowd of onlookers had gathered to watch proceedings. Mastering the difficult conditions, he amassed 21 1/2 lbs of small roach to take top individual place.

Having backed himself at 250-1 with the bookmaker, the Angling Times centre spread shows a grinning Norman Seal holding his Coronation Cup Trophy one handed while clutching a fistful of banknotes totaling £450 pounds in his other. 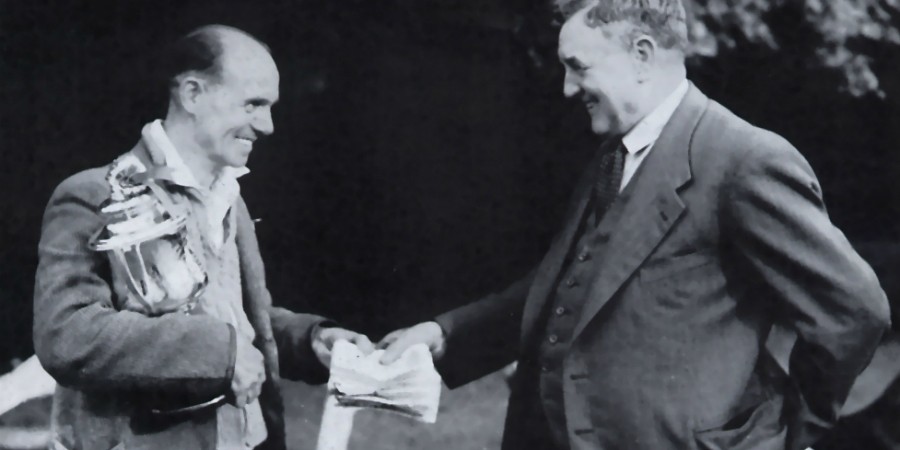 Those winnings would have a rough equivalent today of £12,500 – a small fortune for the average working man. The magnificent Coronation trophy stills hold pride of place in the Seal family. Claiming second place was Lincoln’s Les Smith with 15lbs 15 ½ ounces then F Jones of Sheffield Amalgamated taking third spot with 14lbs 7 ¾ ounces.

As was the practice back in the fifties the team trophy went to the side with the highest total weight so teams with anglers who featured high in the individual prize list had a head start. Leeds anglers Horace Seed and Kenny Kendal had already blanked and this dealt a mortal blow to the Leeds team chances.

Grimsby and District Amalgamated Society of Anglers won the team award with a magnificent effort to total 49lbs 5 ½ ounces taking the silver team Trophy and 13 pint sized silver tankards. It was their first major win in a National angling competition since their team victory in the 1927 All England on the Middle Level Drain. Angling Times captured Grimsby’s smiling captain Jim Dale with the giant team trophy appropriately placed on the steps leading to the bar of the cricket pavilion. What a small world it is for Jim ‘Uncle Billy’ Dale introduced the Trust’s current NAAG chairman Ian Trayer to fishing more years ago than he cares to remember.

Leeds, punished by those blank returns, slotted into second place with 45 lbs 12 ¾ ounces to claim their silver cup and another set of 13-pint sized silver tankards. Rotherham finished up third with 41 lbs 1 ¼ ounces with Coventry finishing fourth.

In the 1953 Coronation Year, Alf Waterhouse then President of the National Federation of Anglers, was awarded an OBE by Her Majesty the Queen in her first birthday honours list for his 'Services to Organised Angling'. He became the first angler to receive official recognition for his connection with angling. The OBE presentation also coincided with the NFA’s 50th anniversary. It was to be many years before Dick Clegg also received royal recognition.