Stately and imposing, our boat lifts are among our most impressive examples of historic waterway architecture.

They were, and indeed still are needed when our canals undergo severe changes in level. One boat lift is cheaper to build and maintain than several locks and the transit time through a lift is far faster than the passage through locks. Most importantly – especially in today’s world - lifts also conserve water.

The first ever boat lift in Britain was an experimental one by Robert Weldon of Litchfield who made a model for demonstration purposes at Oakengates, Shropshire in 1794. He was asked to proceed with the construction of the real thing, a cassion lock to lift boats up a 46’ rise. Unfortunately the lift jammed and failed. 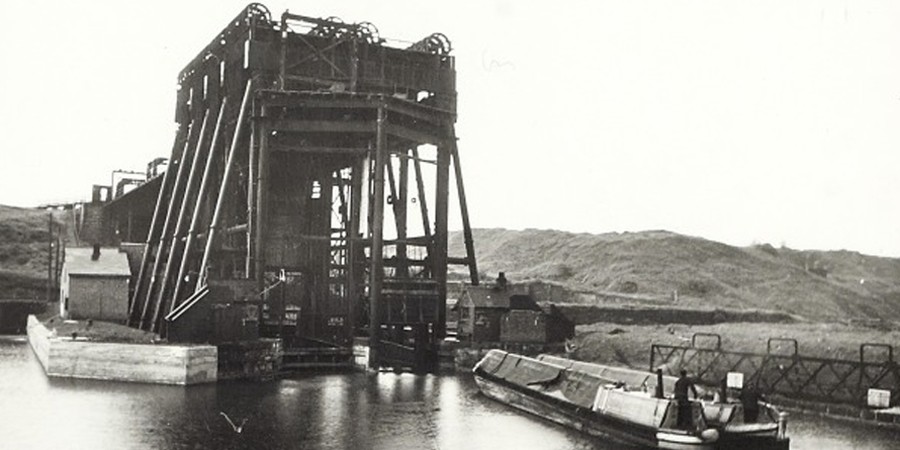 The lift worked until 1983 when serious deterioration of the structure was discovered.

See our Places to visit page for details

See what's happening now to bring it back to life

One of the most famous boat lifts in Britain was the Foxton Inclined Plane.

In 1810 an Act of Parliament was passed authorising the construction of the Grand Union Canal from the Leicestershire and Northamptonshire Canal at Foxton to the Grand Junction Canal at Buckby.

The act opened a route from the River Thames at Brentford to the East Midlands, including the coalfields of Nottinghamshire and Derbyshire. The appointed engineer was Benjamin Bevan and work began immediately on the first major challenge, that of raising the canal 75ft up a steep escarpment at Foxton.

Benjamin Bevan, the engineer, worked on the major challenge of raising the canal 75ft up a steep escarpment at Foxton. He opted for two flights of five staircase locks – a unique design where the locks share a pair of gates allowing a much steeper flight of locks to be built. The locks took about two years to build and the canal was opened fully on the 9 August 1814. Today, they’re essentially the same as they were when they were built, which is a lasting testament to the design and the quality of the construction.

By the end of the 19th century the amount of commercial traffic on the canals was in decline thanks to the new railways. In 1893, the local factory owners and boat companies suggested Foxton and Watford were made wider, and the canal was dredged, conditions would be much better, and they would be able to run large steam boats, which would allow them to compete with the railways.

Design and construction of the Inclined Plane

The design consisted of two counterbalanced caissons that could each hold two narrow boats or one wide-beam barge. The caissons would raise or lower boats the 75ft between the top and bottom of the lock flight in 12 minutes, compared to the 70 that using the locks took. The plane was powered by a steam engine located at the top of the plane in an engine house which is now the Boilerhouse Museum.

The plane was opened on 10 July 1900. But it was never a commercial success. Decreasing canal traffic, high running costs and the fact that the locks at Watford were never widened meant that the wide steam boats never came. The plane was mothballed in 1911 to save money before it was dismantled and sold for scrap in 1928.

But if you visit Foxton Locks today it is still possible to make out it’s ghostly form in the landscape thanks to some 21st century technolgy.