Using the power of the sun to increase dragonflies

At the magnificent Caen Hill lock flight in Devizes, we are using funds generated by our biggest array of solar panels, to install a series of silt curtains that amongst many other benefits, help dragonflies to thrive.

The Caen Hill lock flight in Devizes is an impressive flight of 16 locks and their unique successive side pounds. This incredible feat of engineering was completed in 1810, forming the last section of the Kennet & Avon canal. The Caen Hill lock flight comprises 29 locks over 2 miles, however the stretch most interesting, in terms of the wildlife it supports, is the main elevation of 16 locks from Lock 29 to Lock 44.  These locks form a straight line up the hillside, and due to the steep terrain, each lock has a very short pound. In order to store the water to operate these locks, side pounds were created on the northern side of the canal.

These side pounds (sometimes locally called ponds) are fantastic little havens that have been able to flourish after it was noticed that the numbers and species of dragonflies seemed to be declining following the reopening of the canal. A mini nature reserve, created mainly as habitat for water voles, had just been built south of Devizes and a ‘silt curtain’ was installed to prevent the flooded fields from filling up with sediment. A silt curtain is basically like a giant sieve, made out of flexible material, with chains to weigh it down and floats to support it at the water’s surface. One of our ecologists noticed that dragonflies had started using the area and wondered if this could be due to the improved water quality as a consequence of the silt curtain. She thought that maybe silt curtains would help the dragonflies on the flight too, and a plan to install silt curtains across the neck of each side pound was formed.

The silt curtains have done their job well- the side pounds are now teeming with wildlife! See below for an aerial view of the flight showing an intact (top) and broken (bottom) silt curtain. You can see the difference in the water quality either side of the curtain and how the water quality is starting to change in the pound with the broken curtain. 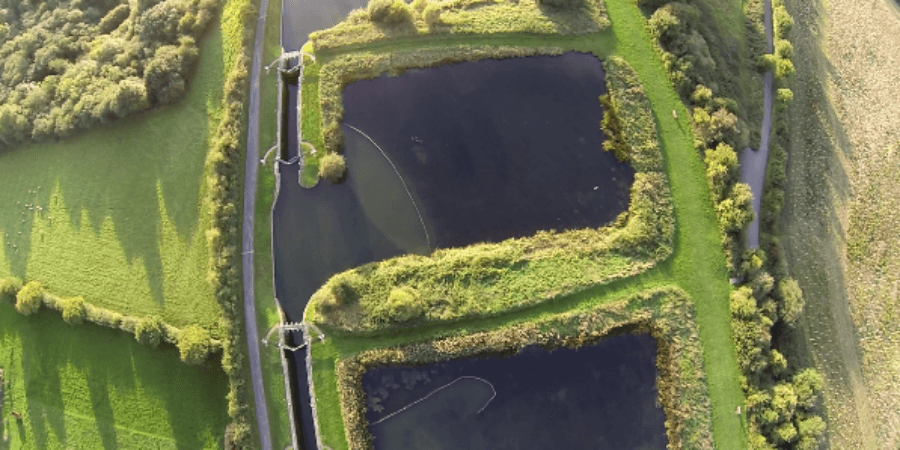 Many of the side pounds are surrounded by a five to ten metre wide strip of common reed (Phragmites australis). The reeds provide ideal habitat for reed warblers which build their basket nests by weaving strips of vegetation around the stems of the reeds. Reed warblers are insectivores which means that they feed predominantly on insects.  Another nest weaving insectivore that has recently been found living in the Caen Hill reeds is the harvest mouse.  These tiny creatures are known to nest in reed beds, however as they, and their nests, are so small they often go unrecorded. The scarce chaser dragonfly, which as you may have guessed from its name, is listed under category 3 (scarce) in the British Red Data Book on Insects, has been found to be breeding in the side pounds on the lock flight and other species of dragonfly are also flourishing.

But the side pounds aren’t just massive fish tanks, they also provide an ideal habitat for butterflies, water fowl and most exciting of all, water voles!

Another project focusing on the Caen Hill lock flight, was considering the environmental impact of the pumps required to move water from the bottom of the flight back to the top. Around 3,300 mega litres of water is pumped back up the flight each year. That’s a lot of water - it’s the equivalent of 1,300 Olympic size swimming pools! This means around 1,300,000 kilo-watt-hours of electricity is required which can be anything up to 5% of the electricity use of the entire Trust. 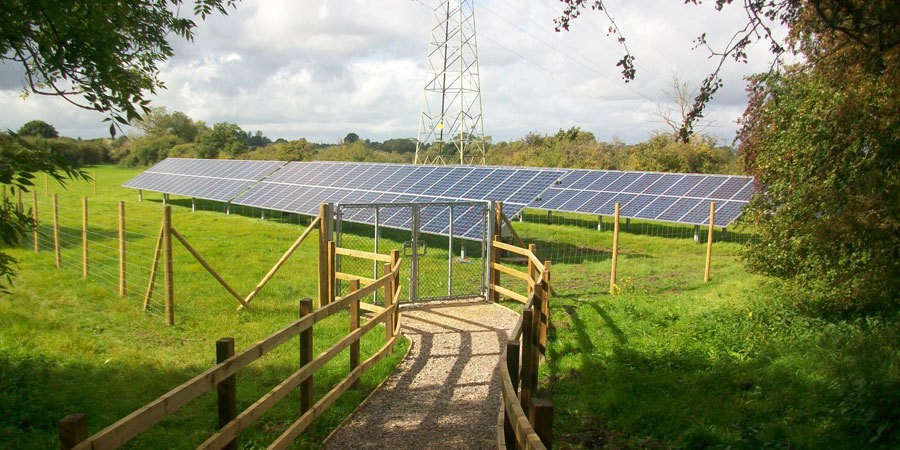 Thanks to funding from the Green Plan Grant (a Trust initiative), solar panels were installed in a field at the bottom of the flight by the pumping station. The renewable energy, generated by the solar panels, in conjunction with our purchase of 100% green energy, helps to offset our environmental impact from running the pumps.

Later this month, our income to date from the solar panels is going to be used to replace all of the silt curtains as they have begun to rip and tear after many years of top service. There are even enough funds to add silt curtains to some of the side pounds which currently don’t have a curtain- hopefully, this will mean that more of the side pounds become suitable for rare species like the scarce chaser and the water voles- all thanks to the money earned by harnessing the power of the sun.