Find out more about the iconic birds that share their home along our waterways.

The kingfisher’s bright orange front and striking blue back and wings make it one of the most striking birds to be found along the waterways of Britain, this little gem is unmistakable as it patrols the riverbanks and towpaths. Mostly found on still pools or slow flowing waters, canals are very good hunting grounds for the kingfisher. It is estimated there are around 4500 breeding pairs in Britain.

A small bird slightly larger in size to a sparrow, kingfishers breed in burrows along riverbanks and can often be seen hunting from a favoured perch over the water diving to take small fish and other aquatic creatures. Most common in central and southern areas kingfishers can be found across the whole of the country, though in winter time many will migrate to coastal estuaries where food is more plentiful

Male and female birds look almost identical however if you are lucky enough to get close to one the lower mandible will differentiate males from females. The male has a totally black bill whilst the female has an orange lower mandible with black tip.

A large black bird with a white bill and ‘shield’ covering the front of its head leading to the term ‘Bald as a Coot’ The coot is a member of the rail family, its eye is dark red in colour and it has very large feet with lobes of skin on its toes, instead of webbing found on ducks and geese. This enables coots to walk on uneven surfaces whilst also allowing it to swim easily. They can be found in large communal groups in winter and feed on pretty much anything. They have a very aggressive nature and can often be seen chasing off other coots. 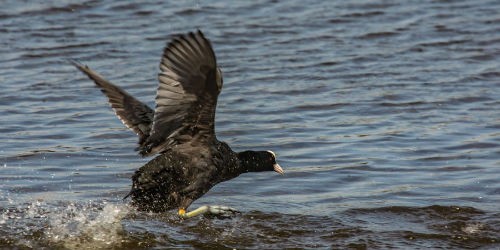 Another member of the rail family, smaller than the coot the moorhen displays a bright red bill with a yellow tip. It has long green legs and large feet. Moorhens are often found dabbling along the edge of rivers and canals searching for food. Omnivorous like the coot they will feed on vegetation, small fish, snails and fruit. The most common member of the rail family in Britain in terms of numbers with around 270,000 breeding pairs. Seen closer-up, they have a dark brown back and wings and a more bluish-black belly, with white stripes on the flanks. 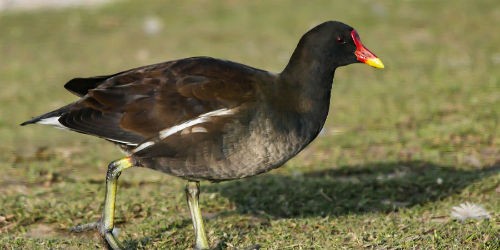 Smaller and distinctly slimmer than the moorhen, the water rail is a fairly common but highly secretive inhabitant of freshwater wetlands. It has chestnut-brown and black upperparts, grey face and underparts and black-and-white barred flanks, and a long red bill. Difficult to see in the breeding season, it is relatively easier to find in winter, when it is also more numerous and widespread. Although usually secretive they can far more often be heard than seen. The call of the water rail is likened to a squealing pig, it is very distinctive. 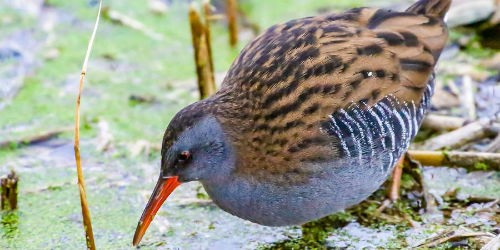 Join the Trust at Fradley Junction  in Staffordshire for one of our bird walks’. We meet once a month throughout the year to introduce people to the birds and wildlife around us, best of all it's free. We have spare binoculars for you to borrow again free of charge.

More from the environment team

Read more about pennywort, eels, water voles, spring, ecologists and lots of other fascinating sights along the canal