The 19th-century equivalent of a motorway, the Birmingham Canal Main Line cuts a straight course from Gas Street Basin in the city centre to Tipton. This impressive waterway runs through massive cuttings and bold embankments.

... see our stoppages section and check your route

The canal is a great base for exploring central Birmingham. Attractions include the bars and restaurants of Brindley Place, the National Sea Life Centre and the Birmingham Repertory Theatre.

It was designed by Thomas Telford to shorten and straighten the course of the Birmingham Canal Old Main Line, taking seven miles off the original length. This was the height of modern canal engineering in its day. Modern boaters can easily imagine how it must have speeded up traffic – with no locks and a straight course, it is one of the few canals where you can get up to the 4mph speed limit.

By the 19th century, the canals around Birmingham and the Black Country had become so busy that congestion was becoming a serious problem. The engineer Thomas Telford was brought in to assist.

Of a much later period than Brindley, he was backed not only by engineering advances that had been made in the interim, but by his own confident style, which resulted in a straighter, bolder New Main Line that reduced the distance between Birmingham and Wolverhampton by a third. The Telford line runs through massive cuttings and bold embankments while also using fewer locks and lies on the 453ft level, 20ft below that of Brindley. A contemporary local historian, suitably impressed, described the new route as "stupendous magnificence".

The loops criss-crossing the New Main Line are the remains of convoluted sections of the Brindley Line that were cut through by Telford. Islands in the middle of the canal once housed toll-offices, all now gone. Near Tividale the Old and the New are linked by the Gower Branch and its three locks, the upper two of which form the only staircase to be found on the BCN. Ryland Aqueduct was rebuilt in 1968 to replace an earlier structure and it is on the nearby railway line that Queen Victoria once reputedly closed the curtains of her carriage so as not to view the scene, which at the time was one of overwhelming industrialisation.

Telford's cast iron Galton Valley Bridge has a span of 150ft (46m) and is preserved as an ancient monument. When built it was the longest single span bridge over what were claimed to be the largest earthworks in the world. 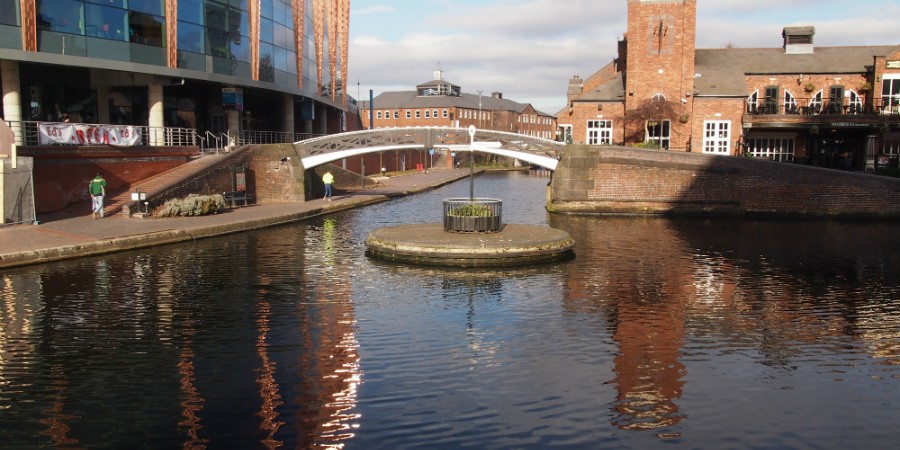 The regeneration of the city's canalside quarter began in the late 1980s. It was epitomised by the internationally acclaimed Brindley Place development, which was the first UK winner of the International Excellence on the Waterfront Award (in 1995) and the UK winner of the 1997 UK BA Tourism for Tomorrow Award Winner for sustainable visitor attractions.

The area is now regarded as the entertainment centre of the city with theatres, music and events venues, restaurants, pubs, exhibition venues and an art gallery and was recently voted as one of the top ten places to visit in Britain by The Commission of Architecture and the Built Environment (CABE).

The International Convention Centre and National Indoor Arena are well established landmarks alongside the canal and have hosted numerous international events ranging from the G8 Summit to the Eurovision Song Contest and most recently the World Indoor Athletic Championships.

Find out more about news, events and how we're helping to improve wellbeing in the West Midlands