An atmospheric little brick bridge set deep in the Wiltshire countryside has played a role in the Kennet & Avon Canal’s history that belies its tranquil setting.

Once part of an Earl’s grand vision for his stately home, Bridge 99 is thought to be the first skew bridge built by the canal engineer John Rennie. It played its part as a World War II defence and most recently served as a therapeutic tool for injured service personnel.

Heritage heroes get hands on

Veterans from our Heritage Heroes project worked with colleagues and volunteers from Canal & River Trust to restore its brickwork and parapet. Each veteran received specialist lime mortar training to do the work.

Veterans returning from service can contribute a great deal to society but too often face difficulties in their transition back into the civilian world. The Heritage Heroes project aimed to equip them with City & Guilds qualifications in construction, health and safety, horticulture and land-based management which can be used to help them identify a new, purposeful career.

The work on bridge 99 cost about £60,000 and was funded by players of the People’s Postcode Lottery Dream Fund.

Bridge 99 (New Bridge) is not far away from the equally historic Crofton Pumping Station. It was also known as Column Ride Bridge and then New Crown Estate Bridge when the then Marquis of Aylesbury sold the estate farmland to the Crown in 1950.

Rennie built the bridge in about 1807 following a masterplan devised by the great landscape gardener Capability Brown in around 1770.

The Kennet & Avon Canal passes through the grounds of Tottenham House, which belonged to the Earl of Aylesbury. Brown planned to link the Grand Avenue in Savernake Forest with one in Wilton Brail so guests could complete their scenic ride. Although the skew arch was positioned to make this connection, the two rides were never joined up.

In most cases, locks and bridges were built next to each other. However, Bridge 99 was constructed mid-way between two locks so the upper classes wouldn’t hear the boatmen’s colourful language as they rode past.

To overcome any structural weakness in the angled arch, Rennie used four brick courses, each following a different line along the arch, to give it extra strength.

On duty during World War II

Not many people know this, but during World War II the Kennet & Avon Canal formed part of Britain’s defence against attack by Nazi Germany. And to this day, concrete anti-tank obstacles still stand on top of Bridge 99.

Called 'GHQ Stop Line Blue', defences were scattered along the waterway to prevent German troops crossing the canal bridges and remain as part of its heritage.

Plenty of wildlife lives along the canal here. And sometimes on the bridge itself - look our for common lizards, slow worms or grass snakes sunning themselves on the brickwork; or red kites soaring above.

Otters use the canal to move across country and water voles make their home in the soft banks and reed fringes. 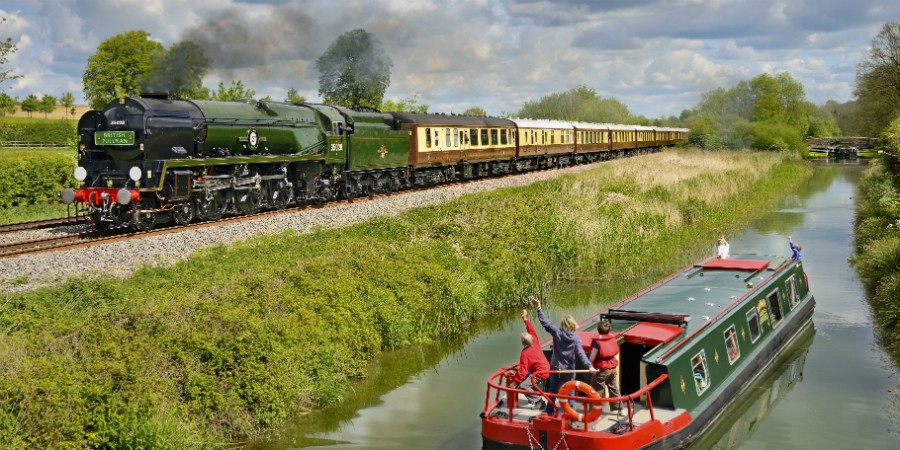 From this bridge, you may be lucky to spot that mighty beast – the steam train – storming its way from London to the West Country on the West of England main line. It's extremely popular with companies running excursion trains.

But word of warning - as the bridge offers a good view of the track, you might have to seek space among all the train spotters who gather there!

And how has the volunteers' handy work turned out? Well here is Bridge 99 today in all its glory...

Bridge 99 on the Kennet & Avon restored

Bridge 99 is one of the many beautiful, historical places to explore along our region's waterways. Download this free guide to more places to visit