We are transported back to the 1930s as Mair shares her childhood stories of growing up alongside a canal in South Wales.

Mair was born in 1932 and grew up in an early 18th century lock cottage in Ystradgynlais, South Wales. Today there is no canal outside the lock cottage due to the in-filling of much of the Swansea Canal over the past 50 years and the northern section is now the A4067 road. We sat down with Mair to hear her memories of what it was like growing up next to the Swansea Canal. 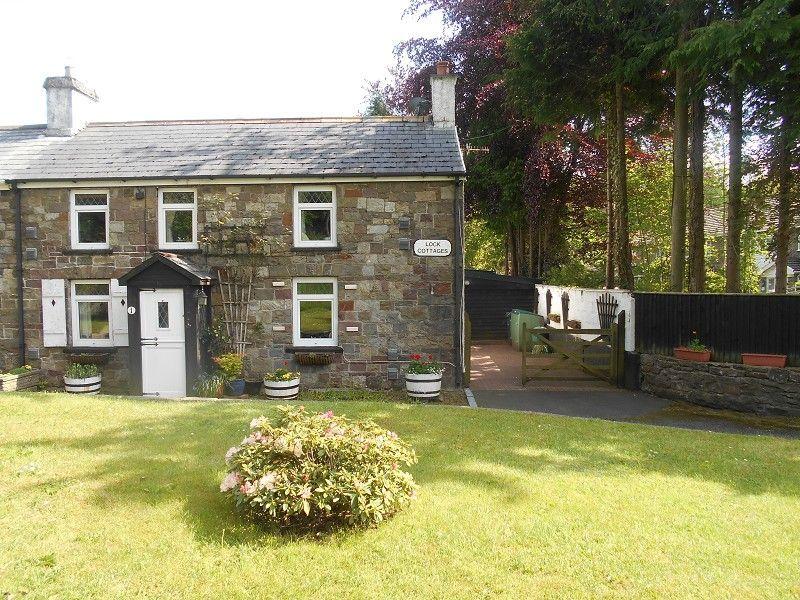 I was born at Lock Cottage in 1932. My mother, Janet Jones, was also born at the house in the early 1900s. Both 1 and 2 lock cottage originally belonged to my grandmother and my mother sold one of them and we lived in the other.

My sister and I used to walk up the road to school in Penrhos and we crossed the river and went up the hill. This top bit was called Ynys Uchaf (the top island) and Ynys Isaf was the lower island. We used to pick wild strawberries on the walk to school. They were only little ones but by the time we reached school (often late) our faces would be all red from the strawberries we’d eaten. Growing up in the house we all spoke Welsh to one another but when I went to school we were not allowed to speak Welsh, so I actually learnt to speak English at school.

Photo shows the old Canal side road which led to Mair & Eirlys' school. Lock cottage can be seen in the background 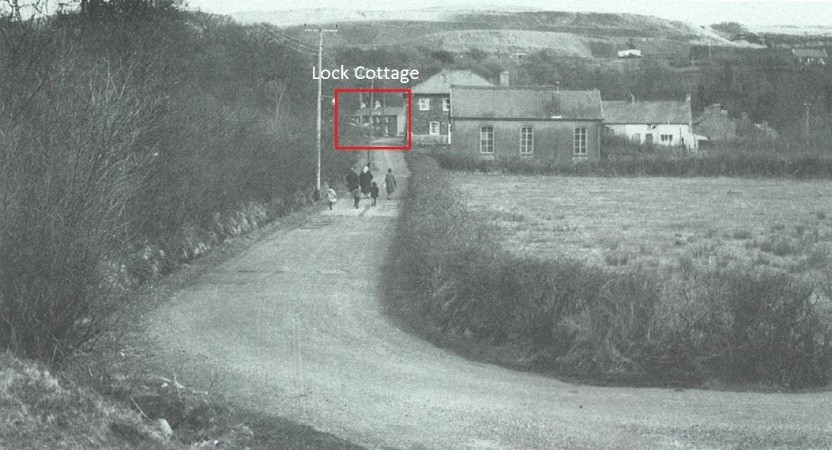 A fond memory I have is of my sister and I when we would to go into the woods across from the canal and make lovely little houses out of ferns. We used to get an empty can of Ideal milk and use the water from the canal to pretend we were having cups of tea.

The lock outside Lock Cottage was full of eels – I’m not joking it was. One of the local boys who lived down Long Row would jump over the canal and say “Come on girls – jump.” Sometimes he would throw an eel out of the canal and we were petrified! I was only a little girl and once my mother was really furious with him because an eel landed on me and I didn’t sleep for weeks afterwards.

Family life along the canal

From being very little I remember the canal wasn’t working. It wasn’t used for anything as it was too shallow, only a few inches deep, that’s why I think they used it as a road. There were parts that were deeper and we were told never to go there, but where we were in the Ynys it was all shallow. My mother remembers it as a fully working canal, very deep with coal barges going along.

Between Ynys Uchaf and Ynys Isaf there was a big round part in the canal where the boats could turn, a winding hole. When my mother was little she would go to the winding hole and watch them turning the boats around because it was really, very clever how they did it. They were so heavy full of coal. She used to see the horses pulling the coal barges along the towpath and said it was a very busy canal. 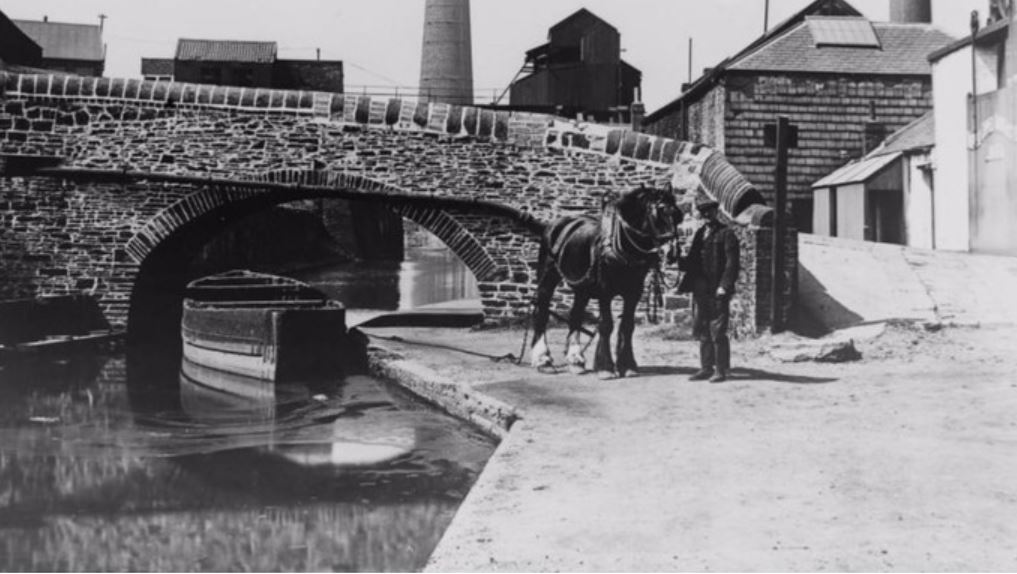 My mother, used to throw something to eat to the men working on the coal barges, and she had a little window in Lock Cottage to serve people like a little shop selling chocolate, sweets and cigarettes. She was a really clever woman and there were only two females in the whole school who passed their eleven plus and my mum was one of them and my brother in law’s mum was the other one. Whenever my children needed help with maths they would always go straight to her.

When I was seven, I got appendicitis and had to have an operation at Swansea hospital. I then got moved to a convalescent home for two months to recover. When I returned home to Lock Cottage World War II was on and my mum had to go to work in an ammunitions factory. I continued my recovery at home and was put on bedrest upstairs. We didn’t have a toilet upstairs so my mother said to me “Don’t move! Call me if you want to use the bathroom or you will have to use the potty”. I was fed up of using the potty so off I went down the stairs and three steps from the bottom I fell right onto my appendix scar and it burst right open. So it was months of recovery again then and my mother didn’t have to go back to the factory as she was at home looking after me. After that we slept downstairs. We had to pull the bed down into the front room because I was too fragile to go up the stairs.

I loved living in a house next to a canal and I loved the lock. The water ran all day in the lock and when we had visitors they couldn’t sleep because of the noise but we couldn’t sleep when they turned the water off because we were so used to it. When we had visitors my sister and I used to sleep up in the loft. They finally turned the water off for good when they decided to finish the canal and then they started cementing it. It was horrible and I was really really sad. Life around the canal was lovely and the lock was lovely, really lovely.

The future of the Swansea Canal is in the care of Glandwr Cymru (The Canal & River Trust in Wales) working in partnership with Swansea Canal Society formed in 1981. They are a dedicated group of volunteers who undertake a wide range of tasks on the canal – including weekly maintenance tasks, litter picking, historical talks and canoe hire. Future plans include the dredging of the canal allowing for a trip boat as well as uncovering and restoration of a buried lock at Clydach. 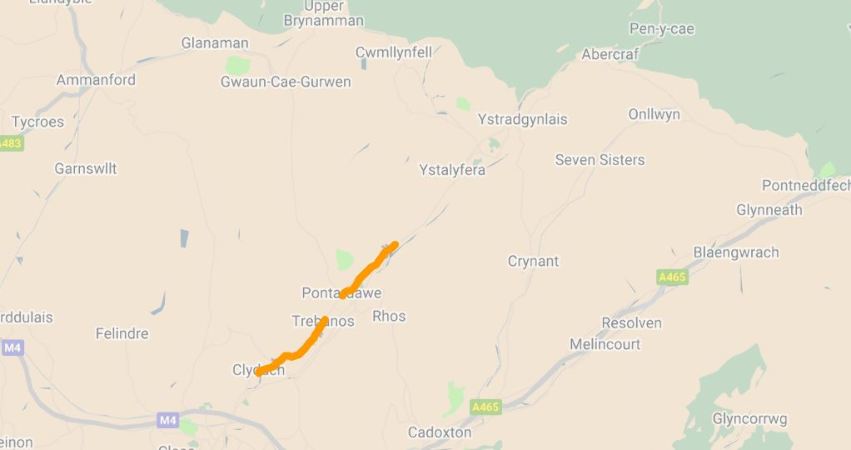 With so much of the original canal alignment lost over the years only glimpses of this historical transportation route which was once the motorway of its day remain. The canal cottages and aqueduct at Ystradgynlais and the abandoned locks along the A4067 remind us of the important role the canal once played in transporting industrial products along the Swansea Valley.

Today the remaining canal sections either side of Pontardawe provide a green and blue corridor in an urban landscape. They connect Ynysmeudwy to Clydach providing health benefits for walkers, joggers and cyclists who enjoy the heritage and wildlife of the canal. Built by the Swansea Navigation Company between 1794 – 98, in 2023 the Swansea Canal will celebrate its 225th Anniversary. 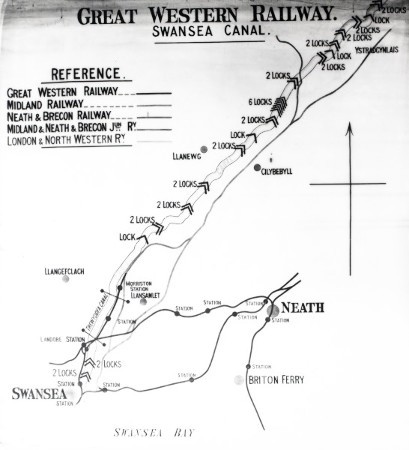