She is the light of my life! Millie was our first ever dog so she has been a bit of a learning curve.

It was our son that wanted a dog desperately. Since the age of two he kept saying, “Can we have a dog, can we have a dog?” I said, “No, never,” I hadn't grown up with a dog so it wasn't something I thought about. Then it got to a stage when we were moving, I was working part-time, Robert was about seven and I thought if we're going to do it, now is the right time.

We don't regret it. Not at all. Millie is twelve now, she's getting on a bit, but she's doing ok. She's had a bit of trouble with her thyroid, but that's under control, and she's a bit lumpy but she's doing alright.

We're in our motorhome on a short break. We've parked near the canal in the Camping and Caravanning Club site down by the Three Magpies pub. Actually we've been there before, it was about 30 years ago. The campsite was just a field behind the pub then. It's Millie's first time here though because that was before her time. 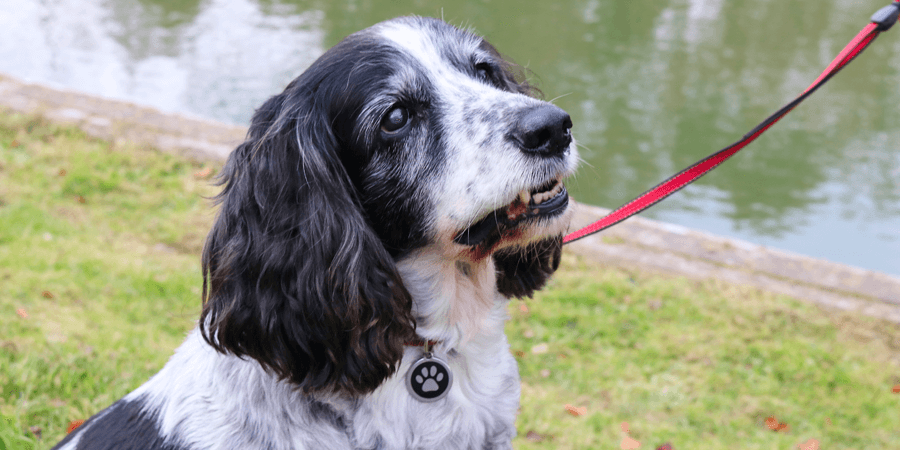 We like walking. Today we're walking this way - tomorrow we shall be walking the other way. Being a spaniel, Millie loves water and tries to get in whenever she can. The trouble is we can't get her out. Because she's got arthritis it's not good for her, so we keep her on the lead. When she was younger, being on a lead was more of a problem than now she's older.

Age can be helpful in some ways. For example, Millie doesn't like fireworks, and since she's getting a bit deaf now, it’s helpful that she doesn't hear everything. One reason we picked the campsite at Sells Green is because we live in Southampton and we thought it would be quieter here away from the fireworks at home. You'd think she'd be getting used to loud noises by now because, living in Southampton, every time a cruise ship comes by she hears them sound their whistle.

Fascinated by the locks

We do live by the coast, but it's a different interest we have in the canal water. Alistair is an engineer so he's fascinated by the locks and everything. We don't go canal boating but at home we used to sail, but then we had children and they cost money.

They've just left home, so we're starting to feel like we've got a bit more money and time now. We're hoping to travel around the UK more in our motorhome.

Millie loves camping. Because we can go camping all year round in the motorhome, we'll probably have another couple of breaks away this year yet.

She is our first dog and I'm sure we'll have another when the time comes... perhaps after a little gap though. I think now we've just got a motorhome and the children have left home we've got slightly more freedom for walking or whatever. We may get a couple of electric bikes and spend a few years doing some of the things we couldn't when we had children at home.