Work begins this week on a major UK wildlife project on the River Severn thanks largely to £10.8m from the Heritage Lottery Fund (HLF) – using National Lottery players’ money - and £6m from the European Union LIFE programme.

The £19.7m project is one of the largest of its kind ever attempted in Europe, and also one of the biggest natural environment schemes ever supported by HLF. 'Unlocking the Severn for People and Wildlife' is being run by the Trust, Severn Rivers Trust, Environment Agency and Natural England.

The project will reopen 158 miles of the River Severn to fish, by creating routes around physical barriers that currently prevent migration to critical spawning grounds. This will help to secure the long-term future of many of the UK’s declining and protected fish species, particularly the now threatened twaite and allis shad which hundreds of years ago were a staple food in the court of Henry III.

State of the art fish passes

Many of these two shad species and possibly sea and river lamprey that we unable to migrate beyond Diglis became extinct in the upper reaches of the river following the installation of locks and weirs needed to allow navigation that powered the industrial revolution in the 1700s. State of the art fish passes will now be installed on four navigation weirs on the River Severn and fish passage improvements made at two sites on the River Teme.

Sir Peter Luff, chair of the Heritage Lottery Fund, said: "The National Lottery is one of the biggest funders of the UK’s natural heritage, so it’s entirely fitting it is supporting 'Unlocking the Severn for People and Wildlife'. The shad may be almost unknown now, but it was the fish of kings and queens, from Henry III to Elizabeth I and Charles II.

The two shad species and possible sea and river lamprey that we unable to migrate beyond Diglis. Salmon & sea trout populations were impacted but not to the same extent.

"The River Severn used to teem with the migratory activity of this species - and with other species that will also benefit from this investment. This project will bring new life and increased biodiversity to a significant stretch of the longest river in the UK and will also see historic buildings from the Severn’s industrial past restored and given new uses."

'Unlocking the Severn for People and Wildlife' will also deliver ambitious heritage, education and science programmes that aim to reconnect eight million people with the river. This includes working with over 200 school classes, 100 community groups and creating thousands of volunteering opportunities.

The project aims to have the knock-on effect of attracting more visitors to the region and boosting the local tourist economy. Recreational fishing on the River Severn currently contributes £13.5m per year to the local economy, and it is hoped that the project will boost this by a further £4m.

HLF has confirmed its support for the project, having already supported two years of research and planning by the project partners. Work will begin at Powick Weir and Knightsford Bridge weirs in July. Work at the other sites - Diglis, Holt, Bevere and Lincomb weirs - which have recently secured planning permission, will be carried out over the next three years.

Jason Leach, our programme director, says: "This project has been in the waiting for over 150 years. While the Severn has been fundamental to the progress of communities along its length in that time, we now have the opportunity to return the eco-system on this stretch of the river to as close as possible to its natural state.

"If we can do this, it will have a vital impact in enabling protected and endangered species to thrive once more. The project will be ground-breaking in scale and will create best practice for natural heritage management, conservation and biological research across the world. We also believe it can have a positive impact on the local economy and create new opportunities for people to enjoy and benefit from the river."

Tony Bostock, chief executive officer of the Severn Rivers Trust, says: "This is a once in a generation opportunity to make an extremely positive change to the ecology of the River Severn. The Severn Rivers Trust is delighted to be involved in this work moving forward and we can’t wait to get going bringing the communities along the river into this project." 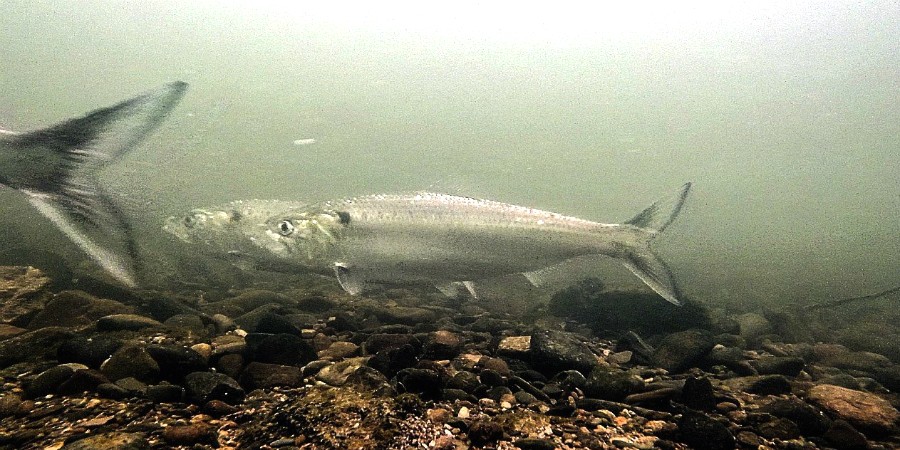 Shad used to run in their hundreds of thousands each May before the construction of these weirs in the 19th century. From monitoring carried out in 2017 the surviving run was estimated at around 15,000 individuals, who make it as far as Diglis Weir. Initial results for the 2018 migration carried out at Upper Lode Weir, suggest the run estimate may be below 10,000, possibly a result of the cool spring.

Unlocking the Severn for life

Read more about this project here