Loughborough MP Jane Hunt has been meeting some of the young people helping us to care for Leicestershire’s 200-year-old waterways as part of the Kickstart initiative.

During a visit, on 28 July, Jane met with some of our Kickstarters to find out more about the work they’ve been doing to improve the county’s waterways for people and wildlife.

We've recruited 22 young people from in and around Leicester to help care for the River Soar and Grand Union Canal. The new recruits, who started in June, will gain valuable work experience in waterway management and customer service, including canal and towpath care and a range of ‘green’ environmental projects.

Already the team have been busy building a special canoe access platform at Barrow upon Soar, making it easier for people to get onto and out of the water. They’ve also got stuck in to works to improve sections of canal bank and erecting safety fencing.

The six-month positions were offered as part of the Kickstart initiative, a programme for young people aged 16-24 who are claiming Universal Credit and are at risk of long-term unemployment. The programme, which is funded by the Department for Work and Pensions, supports young people to build up their experience and help them move into sustained employment after completing their Kickstart-funded role.

The Leicester roles are just some of the 69 placements the Trust is offering nationally, at an estimated value of c.£500,000. The charity has also recruited young people to join its construction teams, where participants will learn heritage skills ranging from masonry, bricklaying and carpentry, to canal bank protection and towpath resurfacing. Two further roles have been created in the charity’s digital marketing team.

The visit was also an opportunity for us to explain proposals for improving sections of the River Soar towpath running through the town. 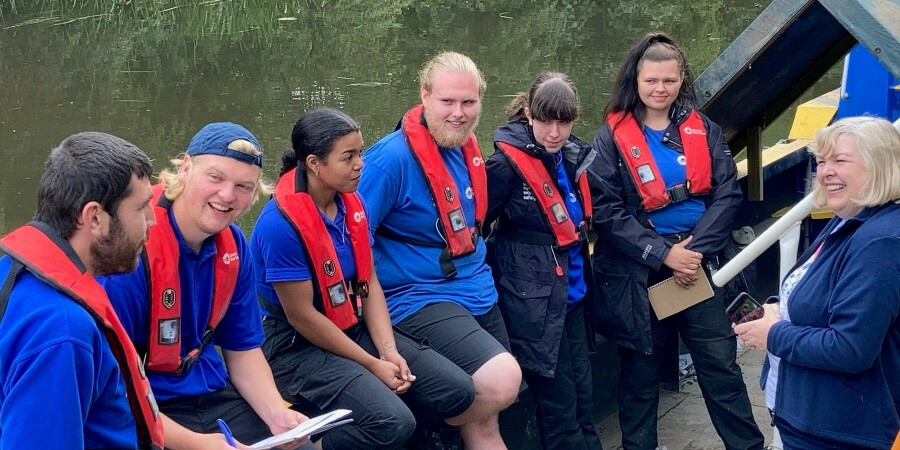 Speaking about the visit, Jane said: “It was wonderful to meet the Kickstarters taking care of our beautiful waterways. Not only are they gaining vital skills and experience but they are helping to protect and preserve our rivers and canals for future generations. They were a fantastic bunch and I wish them all the best in their future careers.”

Linny Beaumont, partnerships & external relationships manager for the Trust, said: “It was great for Jane to visit the canal and meet some of the incredible young people we’re working with as part of the Kickstart initiative.

“It’s been a pleasure to work with the Kickstarters and they’ve already been making a real difference on their local waterway.

“The River Soar has been so important to local people over the past 18 months, providing a green, tranquil place to escape to. The efforts of the Kickstarters, along with the towpath improvements we hope to deliver in the town, will help to make sure that it remains a welcoming attractive place for the local community to enjoy.”