UK first as canoeists can now paddle under the Pennines.

Foulridge Tunnel, on the Leeds & Liverpool Canal, will become the longest canal tunnel in the UK to open to canoes.  At a mile-long, the 200 year old tunnel, looked after by the Canal & River Trust, is regularly used by canal boats, but from Saturday 3 June, canoeists will be able to paddle under the Pennines for the first time.

It will take 10-25 minutes, depending on ability of the canoeist, to paddle through the tunnel. Entry will be via a traffic-light system, ensuring that canal boats and canoeists are admitted separately.

Chantelle Seaborn, our waterway manager said: "The nation’s canals are enjoying a renaissance, with more people using them than ever before.

"Narrowboats have been a common sight at the Tunnel for over 200 years, but with more and more people getting into paddle sports each year we wanted to make it possible for them to go deep under the Pennines and experience one of Lancashire’s waterway wonders."

She added: "At one mile-long, Foulridge Tunnel is an exceptionally long canal tunnel to canoe through. Safety is of paramount importance and canoeists will be required to adhere to the simple, yet effective safety precautions that have been put in place.  These include, checking the tunnel is clear of other craft before entering, wearing a forward facing bright white light and a personal floatation device with attached whistle. We advise only experienced canoeists enter the tunnel alone.” 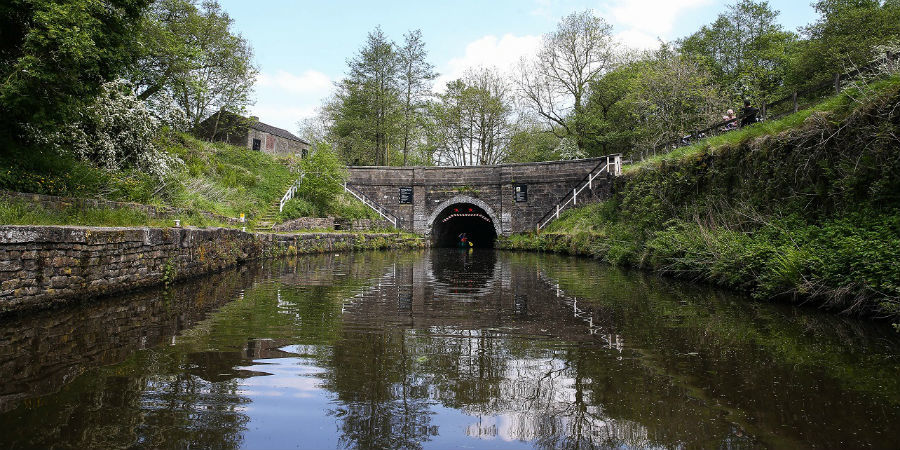 We are opening the tunnel to canoeists as part of its ambitious plans for a coast-to-coast canoe trail that will stretch for 162 miles, connecting Liverpool to Goole along the Leeds & Liverpool Canal and Aire & Calder Navigation. Funded by the Desmond Foundation, the Desmond Family Canoe Trail also has the support of British Canoeing and Canoe England.

Greg Brookes, Desmond Family Canoe Trail programme manager said: "Making it possible for canoeists to access to Foulridge Tunnel has been a major step forward in developing the trail. Foulridge Tunnel is such a unique paddle, unlike anywhere else in the country, which I think will prove popular among the paddling community and it’s great to be able to involve the local Pendle Paddlers and young people with our launch event and raise awareness through National Go-Canoeing Week."

Come and find out more about canoeing on our waterways.

Find our more about our Desmond Family Canoe Trail, and see how you can get involved.