Gloucester Docks in the spotlight as Alice in Wonderland hits cinemas

Gloucester Docks is taking a starring role this week as Hollywood blockbuster Alice through the Looking Glass comes to a cinema near you.

The docks, full of magnificent pirate ships, feature in the film’s opening sequence, after the production brought tinsel town’s finest to Gloucester for a week back in 2014.

A bit of Disney magic made its way to Gloucester’s historic waterspace, although stars Johnny Depp and Mia Wasikowska aren’t believed to have made an appearance.

Claire Risino, campaigns manager at the Trust, worked with the location crew for four months in the run up to the shoot.  She said: “For just one day of actual filming there was a huge amount of planning and preparation needed, from getting the docks ready for the arrival of the tall ships to dressing the outside of the museum for the filming.  We’re delighted that the docks feature in the film, and although they look a little different than we’re used to, it’s certainly put the docks as a filming location on the (pirate) map.” 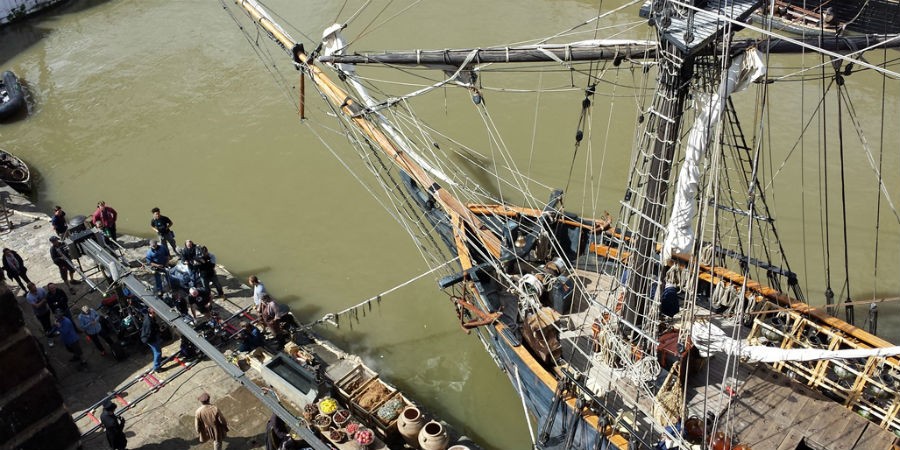 It isn’t the first time the country’s waterways have been transformed for the screen – Little Venice in London stood in for Amsterdam’s canals in Ridley Scott’s thriller The Counselor, and TV’s Call the Midwife transformed Bulborne Yard on the Grand Union Canal into London’s 1960s East End.

Britain’s canals and rivers are enjoying a boom period as locations for everything from TV dramas and big screen films, to adverts and fashion shoots.  Income from filming helps to support the Canal & River Trust’s vital work conserving the 2,000 miles of waterways in its care.

See what else is filmed on our waterways

Our waterways have been in the limelight - or set lights - from feature films to fashion shoots for years.