Between 1909 and 1965, over 80 barges, trows and schooners were deliberately beached on the banks of the River Severn. These ghostly hulks now form an eerie boat graveyard.

I always imagined I would visit this place on an atmospheric, autumnal day and see the famous Purton Hulks emerging from a wall of mist. It is indeed autumn, but today feels more reminiscent of midsummer as I stroll along the blackberry-lined towpath with my guide Paul Barnett, chairman of the Friends of Purton and lifelong devotee to this unique site – the largest ship graveyard on mainland Britain.

"My father first took me here when I was about five years old. The boats seemed massive compared to me," Paul tells me. "They still make the hairs stand on the back of my neck as they did then."

We leave the towpath and walk around the hedge and, suddenly, there’s the River Severn – a gloriously muddy colour and just over a mile across. At my feet, swathed in grass, is the bow of a concrete barge, the first vessel to be beached here in December 1909 in a bid to shore up the bank and save the neighbouring Gloucester & Sharpness Canal from the erosive power of the Severn.

"Why did they use barges as a barricade?" I ask. “Why not just build a wall?"

"Cost," is Paul’s reply, "and there was an urgent need to get something done quickly because the Severn had swept away nearly an entire hedge next to the canal in one tide. These barges could be sailed in and beached quickly." 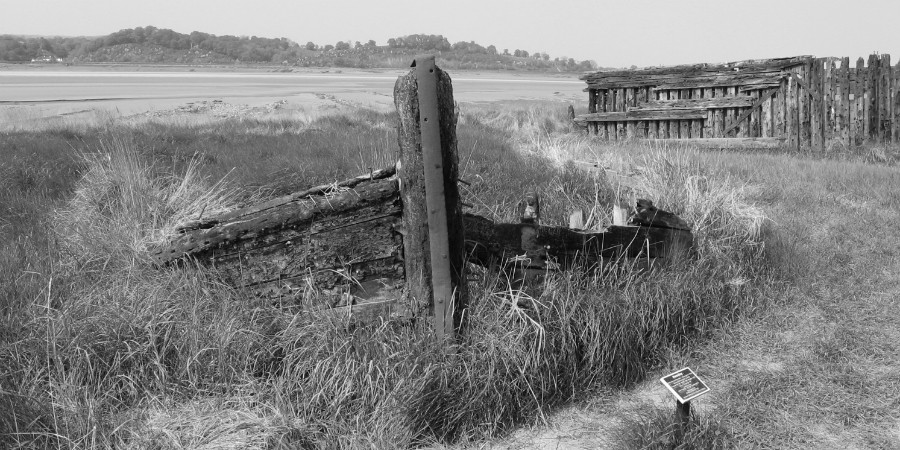 A further 80 barges, trows and schooners have come to rest along this shoreline over the decades; 50 of them no longer visible after being covered by layers of silt. The rest either flank the water’s edge or the grassy bank; bows and sterns rising surreally from the earth like ships from a lower world.

I peer through crevices and portholes and run my fingers over century-old bark and rusting rivets, imagining where these vessels had been and the crews and cargo they’d carried. Paul shows me black and white photos of the boats in their prime on the water or docked in harbours, pointing out distinctively shaped bows, telltale rudders and names carved into the stern, which suddenly brings the wrecks to life in my eyes. Paul still seems genuinely excited by them, poring over his album like it was full of family photographs.

"What made you form the Friends of Purton?" I ask him. "I came back here in 1999 after a long period away with the Navy," he explains. "The state of the place horrified me. For decades this site didn’t have a formal owner, so the wrecks fell victim to arson, vandalism and graffiti. Can you believe people were pillaging the boats for firewood? I just thought, ‘This has to stop’, and since then I’ve done all I can to bring this place to people’s attention and protect it."

In recent years, the Canal & River Trust have taken on guardianship of the site and have erected a beautiful monolith-style monument overlooking the graveyard, engraved with names of the wrecks and the year they were beached. It’s like a token of gratitude to the vessels for saving the canal from the perils of the tides. Paul pats it fondly. "It’s memorials like this and the plaques we’ve put in to mark each vessel that make people stop and realise what we’ve got here, and how special it is. And that’s when the destruction stops."

"I’m a realist," he concludes, before we part ways – him for home and me for roast lunch in the next village. "I know the wrecks won’t be here forever. Iron will decay. Timber will rot. But we shouldn’t hasten its end."

You can find Purton Ships’ Graveyard on the banks of the Severn, a short walk from the village of Purton along the Gloucester & Sharpness Canal. To find out more, visit friendsofpurton.org.uk

From an article by Abi Whyte

In 2010 the Harriett, was designated a scheduled monument by English Heritage. Now, together with Historic England, we protect the monument. And work closely with the Friends of Purton, the Nautical Archaeological Society (NAS) and Cotswold Archaeology to protect the 80 hulks to make sure anyone can come and visit this fascinating site.