Who were the navvies?

While the great canal engineers have their place in history, Abigail Whyte celebrates the navigators who made their vision possible.

Our work is hard and dangers are always near
And lucky are we if safely through life we steer;
But still the life of a navvy with its many changes of scene,
With a dear old wife, is just the life,
That suits old Nobby Green.

Work for a navvy was hard indeed; shifting tons of soil and rock day in, day out, cutting their way through the earth with the simplest of tools and the hardiest of spirit. While Thomas Telford, William Jessop and James Brindley can be admired for their revolutionary vision, it's to the hardy navvy we owe our gratitude for the thousands of miles of waterway we enjoy today.

In the days before canals, many of our inland rivers were used to transport raw materials, such as coal, limestone and timber. These stretches of navigable river were known as navigations. Engineering work was undertaken to improve the navigability of these rivers and when commercial canals began to be constructed in the 1700s, the men who built them were known as navigators. Over time this was shortened to navvies.

“It was dangerous work” 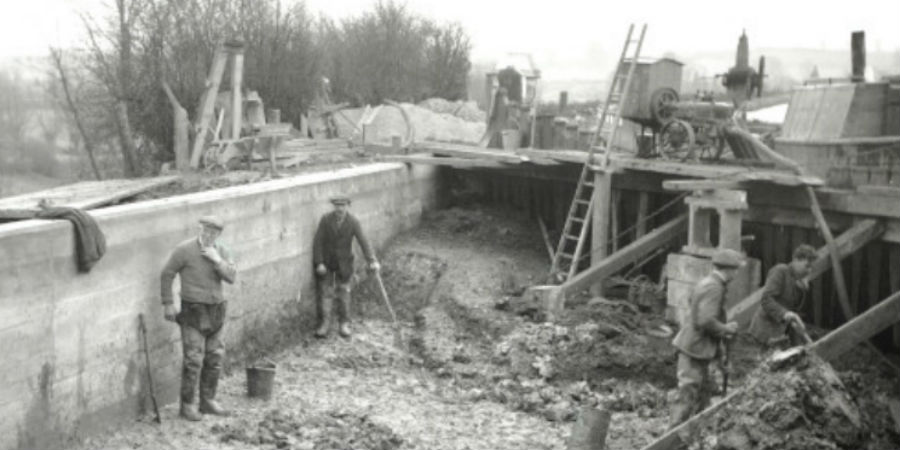 Their work involved literally cutting their way through the earth creating channels, using picks, shovels and wheelbarrows. Once a canal channel, or 'cut', had been dug, the navvies then lined it with 'puddle' (compressed wet clay) to make it watertight and they'd pack it down hard by driving sheep and cattle down the canal.

In the early days of canal building, many navvies were local farm labourers, no stranger to hard toil but unaccustomed to the mammoth task of moving enormous amounts of earth and blasting solid rock with dynamite. It was dangerous work resulting in serious injury, loss of limbs and even death. The Marple Aqueduct in Greater Manchester alone cost seven lives.

Experienced excavators were a valuable commodity, sought after for their skills all over the country. But their nomadic lifestyle occasionally earned them an unsavoury reputation. In many cases they were put up in temporary ramshackle accommodation near their work site, living on the fringes of society, drinking heavily and clashing with the local community.

One famous band of navvies were the Whixall Moss Gang, the longest serving group of navvies in history, employed to work on the same stretch of the Llangollen Canal from 1804 right up until the 1960s. Their job was to continually build up the canal banks along the Whixall Moss stretch to maintain sufficient freeboard (distance between the water and top of the bank). They worked a 48-hour week in all weather.

Onwards to the railways

This continuous work in one location was a rarity among the habitually-wandering navvies and when the birth of the railways dawned on British soil, many of these hardened labourers lent their muscle to building the rail tracks that stoked the fire of the Industrial Revolution, formerly kindled by the canal system. The labour involved in constructing these railways was just as back-breaking and dangerous, if not more so.

But it was the canal builder that was the original navvy. Next time you're enjoying a leisurely cruise or stroll along your local canal, spare a thought for old Nobby Green and his pick axe and shovel. It was tough, sinewy folk like him that made it all possible.

You're reading Waterfront, the online home of our supporters magazine. If you want to be the first to find out about out latest news and features then become a Friend of the Trust. We'll send you regular emails telling you all about our colourful canals and rivers and much more.