Hydrologist, Reyes Martin-Gonzalez, tells us about her recent trip out with Boating buddy, and former Canal & River Trust trustee, John Dodswell, and his trusty narrowboat ‘Helen'.

It was Friday, the 28 of September. A clear sky promised a lovely experience and the plan assured adventure. Trust t-shirts and life-jackets packed, and we were ready to meet her. The Trust adventurers of that day were Adam Comerford, national hydrology manager, Penny Carr, an engaged and hard-working volunteer and me, the new hydrologist based in Hatton.

We arrived at Gailey Bridge by 9.00am and walked towards the Staffordshire & Worcestershire Canal towpath. The sun was shining and the smell of coffee coming out from moored boats welcomed us. John Dodswell, his brother Tim and his sister-in-law Liz greeted us warmly and we finally saw her: 'Helen', an astonishing heritage craft that was born decades before modern technology invaded our lives.

This colourful decorated narrowboat has belonged to different owners throughout her life, but since 2007 John has been the proud boater who’s taken care of her. 'Helen' was built in 1942 in the West Midlands, by Harris Brothers, for Joseph Holloway and Son Limited of Oldbury, as part as their coal delivery fleet. She was built as a tug and ice-breaker and could tow up to four Joeys. Why ‘'Helen'? Well, quite likely after Harris’ wife or daughter.

As many other restored canal boats, 'Helen's' cabin nowadays covers almost the entire hull, adapted to the current needs, but in her early years that was not the case. The larger the space for the cargo, the more profit the boatman could make from a journey, leaving therefore a very reduced space to live on. Once we stepped in we discovered a narrow but well-organised space. Chairs turning into a bed, foldable tables, storage drawers hidden in every corner, and a basic but fully equipped kitchen made this boat a charming floatable home. Great gratitude to the restoration era that allowed the six of us to travel comfortably that day! And last but not least, 'Helen's' heart: the Bolinder, the original diesel engine John very proudly revealed.

Once we learnt the details of this narrowboat and her trips around the canal network, we felt it was time to hear the Bolinder engine running. The three of us had the chance to steer the boat while experiencing the lush and fresh countryside, with a cup of tea in hand, of course.

Travelling down the canal we saw Autherley Junction Bridge, where the Old Main Line connects to the Shropshire Union Canal and where decades ago tolls were paid to the corresponding canal companies.

We then continued our journey, feeling stronger after enjoying a bite of pork pie and tasty shortbread, towards the Wolverhampton flight. A total of 21 locks led us into more urban scenery with old brick bridges and many factories along the canal. Ascending the flight required a bit of team work to maximize the adventure. While four of us were walking up the towpath opening and closing the locks – and ticking the box for the 'gym session of the day' - Adam and Liz stayed in the boat and made sure 'Helen' was nimbly traveling up the flight and finally getting into the top pound, where our fantastic trip ended.

Thank you, John and 'Helen' for this memorable experience! 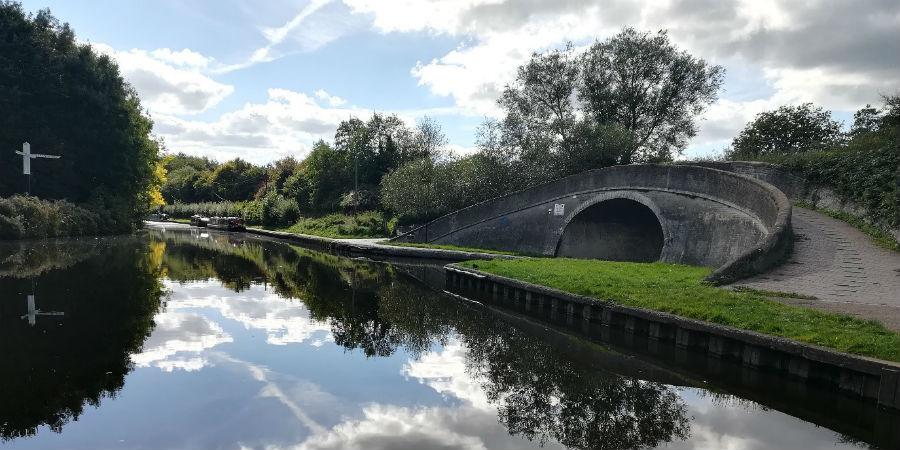 The water management team spend their days making sure that we have just the right amount of water in our canals. Here they share some of the highlights of their work with us.