The naming of boats

Somewhere on the waterways there’ll be a boat named January. A few of them, probably. There’ll be a 'Resolution' or two, of course. And there’s bound to be a 'New Start' somewhere? That’s guaranteed. It’s a very canal boat kind of name. But then, of course, every word is a very possible boat name.

That’s the thing I’m discovering as I walk, cycle, navigate and paddle the canals. With 35,000 or so boats spread out along the waters there’s enough bows and sterns to take Shakespeare’s total vocabulary of around 30,000 words. And that’s allowing for a few repetitions, and for those boats with no more identification than their licence number stuck in a window.

Indeed, many of the Bard’s odder words would make good boat names. The 'Merry Boggler' has a certain devil-may-care swagger to it, (someone whom just can’t make up their mind, from Anthony and Cleopatra, as you ask). And 'My Kickie-Wickie' might raise a wry smile from passers-by with knowledge of Elizabethan domestic insult (Google it!). Oh, and Shakespeare came up with Foxship - ‘craftiness’ - which seems just the kind of watery boat pun that many owners rather favour as a handle for their craft.

NB Foxship? Why not? Because reading the names of the many hundreds of boats I’ve passed along during the past months, I’ve noted that boaters have drawn on every aspect of English vocabulary and culture for their boat names. And on foreign languages and civilizations as well, including Vulcan and references to Middle Earth and Narnia.

For all the diversity there are still themes that are more numerous than others. ‘Nature’ produces swarms, shoals and flocks of 'Kingfishers', 'Grebes', 'Little Owls', 'Pikes' and 'Dragonflies'. As well as many-a 'Jenny Wren', even if that’s more a celebration of earlier canal history than actual natural history. Some ornithological influences are more obscure, perhaps flagging up on-board birders celebrating favourite species, rare sightings or more than passing knowledge. 'Chiffchaff', perhaps. 'Oriole'. 'Pica Pica'. The latter was beautifully painted onto a narrow boat with smart black and white livery, giving a ‘ha, got it!’ satisfaction when I recognised it as the scientific name for the magpie. 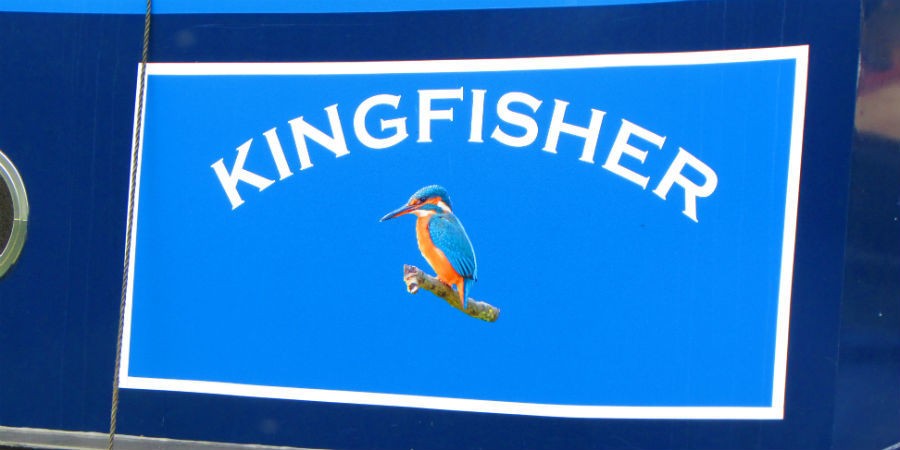 Then there are the references to popular culture, above all to music. 'Piper At The Gates Of Dawn'. 'Purple Haze'. 'Tea For the Tillerman' (good, that one). 'Free Bird'. All those 60s and 70s and – fewer – 80s songs and albums and bands rescued from nostalgia and repurposed for canal life. That there’s not many boat names influenced by 90s and new millennium music at the moment, maybe reflects the current canal users’ majority demographic. So, if there aren’t any 'Smells Like Teen Spirit' or 'Gangnam Style' boats out there just now, for future generations of boat owners Smells Like White Spirit or Gangplank Style may be exactly the name that connects their youthful memories to the reality of live-aboard life via a groan-inducing pun.

Another popular thread of naming themes is celebration of either a new life started or an old life escaped. I’ve come up with 'Bailed Out' myself though I still need a boat to paint it on, and then disappear in. I’ve seen a 'Break Away' (a musical reference too, so surely a high-scorer in Boat Name Bingo). A 'Dunravin’ seen on the Kennet And Avon. And I’ve heard of a 'Twit To Woo', which hints at some sad and personal heartbreak.

Whilst still in escapist mode there are plenty of boats titled along the lines of Happy Hour, 'Half Full' and 'Time to Wine Down'. A point made at almost novella length on a boat I spotted on a twenty-four vigil by one of the Bosley Locks on the Macclesfield Canal. 'Half Cut': It’s 5:00 Somewhere. Sign-written in ‘sliced’ lettering with a champagne glass illustration, braiding visual puns with a canal reference and an optimistic take on cocktail hour.

Naturally, now I’ve become interested in the subject, I’ve had a look at web threads where boaters swap sightings of craft with amusing, and often rude, names. The kind of names based on puns, quirky references, innuendo and smart word-play. Or ideally all of those qualities in one choice moniker. Norfolk Enchants, for instance. 'Ship Happens'. And a favourite, 'Unsinkable II'.

Message from a parallel world

But the echo chamber of internet doesn’t bring the immediacy of coming across a boat name out in the real world which through some alchemy of time, place and meaning seems to connect everything to everything as neatly as the elusive String Theory is meant to. A kingfisher flashing past a boat called 'Kingfisher'. Paddling along the Leeds & Liverpool in its bicentennial year and seeing a bulky hull loom out of the sodden fog, reading 'Kennet' on its stern, the name unlocking all the history of this River Class Leeds & Liverpool Short Boat still thudding along as it home waters as it had done for seventy years. And if historic and traditional names connect the distant past to the here and now, sometimes what should be no more than a random name in the here and now can seem like a message from a parallel world, or fortune cookie prediction from the future. Or a command from the fates. Walking the Macclesfield Canal, just as I was beginning to flag after a few days of towpath marching in so-so weather I suddenly spied my own name beautifully painted on the side of a neat narrowboat, and underneath it the cursive script addition of Free Spirit. That put a spring in my step for the coming miles. 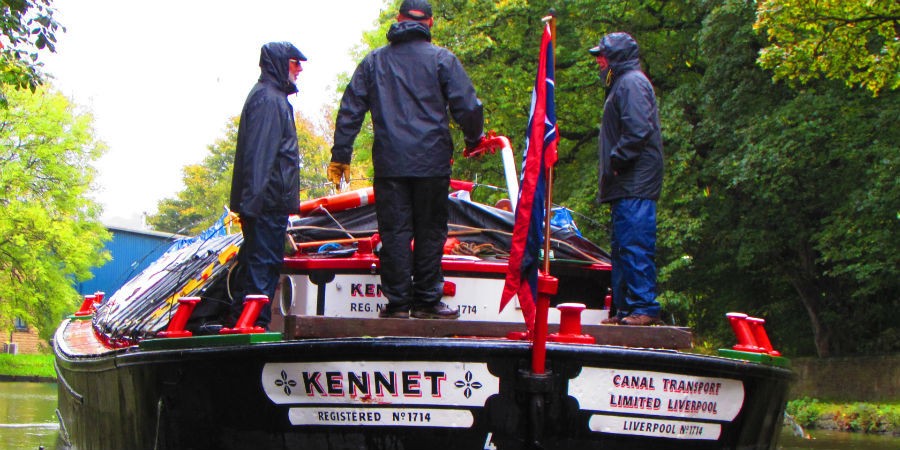 Or hitching a lift on the Leeds & Liverpool Canal, with a couple of boaters to get my kayak through the Foulridge Tunnel. I perched on the back deck, mug of tea in hand, as Bill recounted tales of his past travels, of open ocean boating and risky deep-sea dives on wrecks. Now, after serious coronary surgery, such adventuring was beyond him. But he was upbeat, though, talking more about what he was still doing than what he had done and could no longer do. It was a positive and inspiring attitude. And as he was telling me this, the boat chugging us eastwards towards the tunnel entrance, my eye caught the name on a boat we were passing. 'Change of Heart'.

Seemingly the names of the waterways’ total fleet encompass every aspect of our complex, intertwined cultural lives. They’re like a folk dictionary, a joke book, the I-Ching, a field guide to birds, a time-line of history and a psychiatrists case book all rolled into one. Boat names can be deep, daft, offensive, inspiring or plain baffling. They can stir us to remember half-forgotten knowledge – mythic gods, nursery rhymes, 70s television series, canal history. They can be as difficult and satisfying to ‘get’ as solving a cryptic crossword clue.

The naming of things

The naming of things is a necessary but complex human skill. And the naming of things is also poetry. And the naming of something like a boat, which is really far more than a ‘thing,’ is also very, very personal. Boat names are an insight into the owners’ dreams, ambitions, and interests. They can be a biographical note from the past life they’ve lived, or a snapshot of the lives they’re now living – or hope they’re living - on the canals. They’re very private thoughts printed out – in Gothic, and Italic and folksy and hand-daubed scripts – on very public surfaces.