The link between fisheries and the social history of people around the planet is an ongoing feature of mankind’s time on the planet. Some of these communities, such as the fishermen of the Sea of Galilea have gone on to change the face of history. This country too has had its fair share of fishing history, much of which was probably never formally recorded.

The fishermen of Gloucestershire 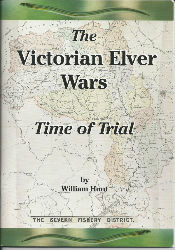 I am indebted to the work of William Hunt, author of a wonderful book ‘The Victorian Elver Wars. Time of Trial’ for much of the content of this article. If you are inspired to find out more, the good news is that copies of William’s book are still available.

There is little doubt that resident Severn-siders will have fished their local waters since time immemorial, their target species being the fry of the eel known as elvers. Also, in times gone by, they would have fished for sea lampreys too. Indeed, despite a fall out with King John, the City of Gloucester went on to send a lamprey pie to the monarch each Christmas for many hundreds of years.

In 1533, around the time of his marriage to Ann Boleyn, Henry VIII prohibited the taking of elvers for ten years. In the first year of her reign, Elizabeth I, daughter of Henry and Ann, made this ban permanent. In 1667, King Charles II introduced a 5-shilling fine and forfeiture of fish and nets if anyone was caught elver fishing. Enforcement wasn’t exactly top notch back then. For best we can tell, nothing much was ever done to enforce these laws. Although on the statute books, the law was effectively ignored on the ground.

In 1778, things were relaxed somewhat on the elver fishing front. New rules allowed people living on the banks of the Severn and Vyrnwy to take elvers for household consumption but not for sale. Those who know their geography will realise the Vyrnwy confluence is a heck of a long way from the estuary, 120 miles upstream give or take. This makes you realise how abundant elvers must have been back then. Yet in the previous two centuries, authorities appeared to have been sufficiently concerned about falling numbers to bring in legislation to prevent over-exploitation.

The Severn Fishery District was set up in the 1860s in response to the findings of the report of the commissioners appointed to inquire into salmon fisheries. Like other such salmon river catchment boards set up following the 1865 Salmon Act, they had a major role in fish stock protection and lobbied for improved law to protect fisheries. Further powers came with the passing of the 1873 Salmon Fisheries Act.

However, it was the wording of section 15 of this Act, as set out below, which was to cause much consternation to the elver fishermen of Gloucestershire. It states:

‘That no person between the first day of January and the 24th day of June inclusively shall hang, fix or use in any salmon river and basket net or trap whatsoever for catching eels (or the fry of eels) or place in any inland water any device whatsoever to catch or obstruct ant fish descending the stream.'

For the catchers of adult eels, which head downstream to the Atlantic in the autumn on route to the Sargasso Sea, the new law mattered not a jot. But for the catchers of the fry of eel, the elver fisherman of Gloucestershire and the rest of England and Wales, it meant, in theory, the end of elver fishing.

With the new law coming into force for the start of the 1874 elver fishing season, the bailiffs of the Severn fishery district were preparing themselves for what was felt likely to unfold. In early April 1874, two Tewkesbury men, Messrs Hathaway and Walker were first to be fined; a shilling each with 10/6 court costs. Give or take, this was a weekly labourers wage back then. Later that month, seven elver fishermen were acquitted as the prosecution failed to prove beyond reasonable doubt that elvers were the fry of eels. Two days later, three men were found guilty at Whitminster court. On conviction, they were given a choice of a ten-shilling fine or seven days’ hard labour. All three paid the fine. In May that year, five more men were found guilty of elvering at various courts in Gloucestershire. Daniel Smith was fined 10 shillings plus a guinea in court costs. To cap things off, five men were fined for destruction of a public notice-board upon which one assumes was written an elver fishing prohibition notice. 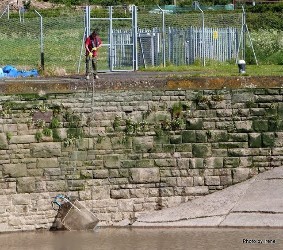 The 1875 elver season passed off almost without incident. Only one case came to court and the three guilty men were fined six pence each, plus 7/6 court costs. Some thought that the reality of the new law had set in and that compliance was the order of the day. However, it did not work out like that. No less than ten men were hauled before magistrates on 15 April 1876. All of them received 10 shilling fines and court costs of at least as much on top. A fortnight later at Whitminster, a further four men, Messrs Worrall, Manley, Harper and Powell were found guilty with immediate payment of the fine or imprisonment. All except Powell were arrested and sentenced to 14 days’ hard labour, which meant walking the treadmill each day, a severe form of punishment if ever there was one. All the prisoners had canal connections, for they were corn porters employed at Gloucester Docks. They were seasonally laid off and in the spring turned to elver harvest for food and income.

Concern and the Gloucester Enquiry

Even with limited voting rights that applied at the time, public opinion mattered up to a point. The citizens of Gloucester had widespread sympathy for the elvermen. The city’s two MPs, Messrs Monk (Liberal) and Wait (Conservative) moved to repeal Section 15 of the 1873 Salmon Act. To cut a long and fascinating story short, what followed was an enquiry with a Gloucester resident, Commander Francillon putting the case for the elver fishermen. The upshot was that an elver fishing season from 01 March to 25 April was introduced. The full account of the events of 1876 is fascinating and if you have read this far, we would recommend that you get yourself a copy of William Hunt’s fascinating book. In 1935 this was finally repealed and elver fishing could be freely entered into. These days, elver fishing is permitted between 15 February and 25 May inclusive.

But what future for the elver and elver fishing?

The underlying theme of the history of elver fishing since Henry VIII’s time is the long term sustainability of European eel stocks. As a boy learning to fish in Shropshire, eels were so common you even caught them on the baits specifically designed to avoid them, such as bread and sweetcorn. Long gone are the days of the residents along the banks of the Vyrnwy elvering to their hearts content. The reasons for this decline – which I don’t think are in dispute – are numerous and inter-related. The installation of weirs on the Severn in the 1840s played a part, but eel populations didn’t immediately plummet. Global warming, swim bladder parasites, loss of access to inland habitat and over-exploitation on a European wide basis have all played their part. Personally, given the current parlous state of stocks, I would be surprised if commercial elver fishing will survive more than another decade or so. I do hope I am wrong about that, for it would be the loss of another part of our cultural heritage that has existed since time immemorial.