This blog is brought to you courtesy of James Buckley who has been fortunate enough to spend a few days on work experience with the Trust's fisheries team. 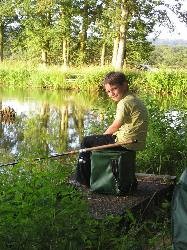 My first adventure was when I was four years old with my dad. On a friend's farm was an old, weedy, silted up lake, with patches of clear open water which were fishable. My dad got out his old fishing gear that he used when he was a kid. We fished in the simplest way – a small float and hook with a pint of maggots for bait. I remember exactly when I caught my first ever fish, which happened to be a pure wild crucian carp. It weighed only a few ounces, like most people’s first fish, but as a kid the weight of the fish is irrelevant because all I can remember was how amazed I was with the capture of this small but beautiful fish. That fish got me hooked.

The loss of a big fish

Later on, I carried on fishing in ponds on farms, catching roach, rudd and perch and I was very happy doing this. One day I cast into a patch of lily pads and hooked a big fish. It felt so big at the time, but it swam into the lily pads and snapped my line. I did my research on the lake at home and found out that two years previously the lake had been stocked with tench, which is a very powerful fish that lives on the lake bed, so I think the suspect was one of these green-coloured specimens. 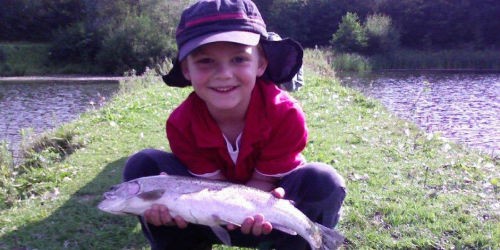 My dad started coarse fishing when he was five years old and has fished all his life, but his real passion has been fly fishing. He introduced me to it at the same age. Fly fishing when you are five years old is very hard because of the casting, but my dad helped me out on my first couple of trips and I soon caught a 6 lb rainbow trout. That fish is actually the biggest rainbow trout I have ever caught.

Becoming a member in a club

After landing that trout, I wanted to catch bigger fish so my dad and I joined a coarse fishing club, Roakary Angling Club, and at seven years old I caught my first ever carp. The sensation of knowing that you have caught this wondrous fish is magical and when the fish swims safely away you know that it’s all gone to plan.

By the age of ten, I was proud to say I could pretty much fish on my own. It’s true that my dad was there when I needed help like unhooking fish or if I got in a bad tangle but I fished separately to him on the next swim. One example of this was I was fishing on an estate lake, fishing a little float with corn and maggot and I had a great afternoon fishing, catching a 2 lb bream and several big roach.

When I turned twelve, I first met my fishing idol, John Bailey, because I had applied for the role of his son ‘Peter’ in an upcoming television program called ‘Fishing in the footsteps of Mr Crabtree’. Unfortunately I ended up being first reserve and thus never made it on to TV. I did get to go to the end of production party where I met all the various Peters who had been chosen for the first series, as well as the director and not forgetting John Bailey, who played the role of Mr Crabtree in the programmes. 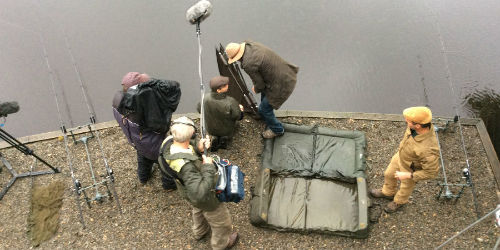 Off to the Wensum

John Bailey did, however, invite dad and me out on a day’s session where we caught loads of roach on the River Wensum using the centre pin reel. We caught quality perch going up to 2 lbs on the float using big lob worms as bait. We all became friends, having trips up to Norfolk every four months or so and during the first year I caught a big pike, a 5 lb chub and best of all was a magical 2 lb roach.

I had turned fourteen when the second series of Mr Crabtree came around to being filmed in 2014. John asked the director to let me be the new Peter and so I landed the role of Peter Crabtree. It was filmed in amazing locations including fishing in forests in France, where I caught common carp to 42.4 lbs, big perch, pumpkinseeds and little catfish.

Then we filmed in England on a road trip round the southern half of the country, where we caught 8 lb bream, 3 lb crucian carp, 6 lb tench, 2 lb brown trout and so many more fish. While filming Mr Crabtree I met some very famous fishermen like Allen Blair, Allen Stags and Adam Penning (a lot of A’s there I know!).

I had the best time of my life filming Mr Crabtree and I made so many new friends including Jack Perks, the second camera man and professional underwater camera man. Jack and I are still in contact today. Experiences like this, even when not fishing, are just so enthralling. The amount I learnt about fishing, fish and the surrounding environment over a period of one month, every day from 4am until 10pm was just amazing. 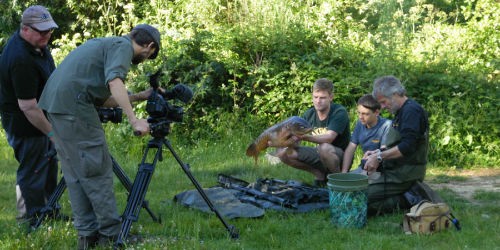 I stayed in touch with John Bailey, fishing for all sorts of fish together and then, a year on from the making of ‘Mr Crabtree’, I was asked to help present another programme called ‘The Pursuit’ which was a carp fishing programme. As well as the carp fishing aspect, we also filmed for two days on the River Test catching big gudgeon which I now know are John Ellis’ favourite fish, some lovely dace and a half pound grayling.

I have fished in many other places since then, from reservoirs to tiny little chalk streams, to fishing off boats to sea fishing, even winning matches and taking some of my best friends who are now hooked on fishing too. I have been fortunate to land some amazing fish, but nothing can beat the once in a life time opportunity I had to show the world through a TV programme, how amazing it can be to be outside in the countryside just enjoying the wildlife around you at the water’s edge. Thank you, Bernard Venables.