This article explores something of the life of the world’s most primitive fish.

Having been around for perhaps 500 million years, these are the most primitive species of fish, indeed some taxonomists argue they should not be classified as fish at all. They are marine dwelling and are found living in all of the main oceans. Around 30,000 kgs, roughly one billion lancelets are harvested off the coast of southern China each year. Lancelets’ other economic use is as a laboratory study animal as they demonstrate the most primitive ‘vertebrate’ characteristics that all aspiring zoology undergraduates need to know about in order to get that all important good grade.

There are 38 known species of lamprey in the world with recordings of further extinct species in the fossil record. They are found in both hemispheres of the globe, although they are confined to temperate rather than tropical regions. Three of these species can be found in the UK. These are the brook lamprey, river lamprey and sea lamprey. Lampreys are often called the jawless fishes for obvious reasons. They also lack scales. One British king, the youngest son of William the Conqueror no less, is believed to have died from eating a dodgy surfeit of sea lampreys. Supporters of King Harold were no doubt secretly celebrating on hearing the news. Interestingly, there remains a royal connection with lampreys to this day. 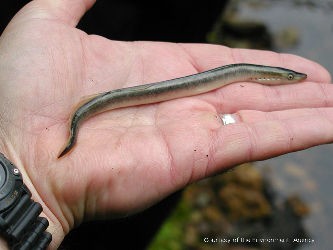 The non-parasitic freshwater dwelling brook lamprey lays maybe 1000 eggs, whilst the parasitic sea lamprey may lay several hundred thousand. Males build nests where the female will then lay her eggs. After hatching, baby lampreys are known as ammocoetes and these blind, toothless fellows burrow into the silty bed of a stream, river or canal. Their heads sit above the silt and they filter the water for food. Ammocoetes may live and filter feed for five or more years before they become adults. They live as adults for around six months, during which time they do not feed and shortly after spawning, death occurs.

River lampreys and seas lampreys are parasitic as adults. Parasitic lamprey species grow much larger as adults than the free living brook lamprey. Unlike the non-parasitic forms, they feed as adults. To do this, they attach to the side of the host fishes using the toothed oral disk, rasp a hole in the skin and live off the blood and tissue fluid of the unlucky host. The unlucky host loses mass, condition and quite often dies as a result. Like salmon, lampreys return to freshwater in order to spawn. Adults on spawning migrations are attracted to a bile acid, petromyzonal sulfate, which is produced by the juveniles. Parasitic lampreys cause significant economic damage. According to Beamish & Youson, it’s been estimated that off the coast of British Columbia 10% of the salmon and 18 million tonnes of herring are killed annually by lampreys.

The sea lamprey made its way to the North American Great Lakes via manmade canals that connect with lakes which themselves connect to the Atlantic Ocean. This has led to the decline or local extinction of several fish species. Authorities have resorted to extensive lamprey control strategies involving chemical larvicides and various methods of trapping adults in spawning tributaries. These actions together have reduced, although not eliminated, lamprey populations.

In contrast to the Great Lakes, all three UK lamprey species protected by law have become increasingly rare. Numbers throughout Europe have been on the decline for centuries, probably due to a combination of overfishing, migration blockage from weirs and dams and sedimentation of spawning habitat. For almost 200 years there have been insufficient availability of sea lampreys in the Severn Estuary for the City of Gloucester to be able to deliver a lamprey Xmas pie to the reigning monarch.

The brook lamprey is very common on the Swansea Canal, where we recently successfully rescued many thousands by repeat electrofishing prior to carrying out dredging activity. Many are also present in the upper reaches of the Llangollen Canal. Much to our surprise, the Trust also recently rescued nearly 100 brook lampreys on the Gayton Brook culvert, which flows under the Trent & Mersey Canal near Stone. This example illustrates the need for undertaking fish rescues at locations which at first site might appear fishless, for it would have been an offence for the Trust or its contractors to have killed these lampreys.

The third group of primitive fishes are the hagfishes, which are also known as slime eels. These marine fish are prodigious producers of slime – a two foot long hagfish can produce two gallons of slime in under an hour. Despite this unattractive feature, hagfish form an important component in the diet of dolphins, seals and sea lions and hagfish overexploitation is having a knock on effect further up the food web. Broiled hagfish, known as anago-yaki, is a delicacy in Japan. Another commercial use of hagfish is their skin, which is the main source of eel skin wallets, purses and briefcases. Many hagfish are mud dwelling and don’t require a lot of oxygen to keep going and the same applies to food. It’s been calculated that one large carcass meal will keep a happy hagfish going for a whole year. Oh, I do wish I could somehow manage that.