Fishing isn't all about catching

It’s the little things, ones most people wouldn’t even notice that can make all the difference when you’re fishing, and I had never realised this so clearly until a recent trip on a new lake.

Most people think fishermen just go fishing to catch fish, but for most fishermen it’s a lot more than that and we will happily sit out all day in the best and worst of the British weather to spend some time on the bank.

I woke up about 5.30am, before the sun had risen, so had to get my fishing gear ready in the morning twilight. I stepped out to my car, the paths glistening with frost after the cloudless night and my car was frozen. But after a bit of de-icing, whilst the familiar orange glow of the sunrise climbed over the houses behind me, I had my fishing gear loaded into my car ready to set off. As I crunched over the frost tipped grass to the lake, whilst most people were still fast asleep in their nice warm beds, I was met with the wonderful sight of mist rising up from the undisturbed water. The stillness was short-lived however, as two swans heard me on the bank and carved through the mirror-like surface of the water to come greet me in the hope I had some food for them, although it did make for this great picture. 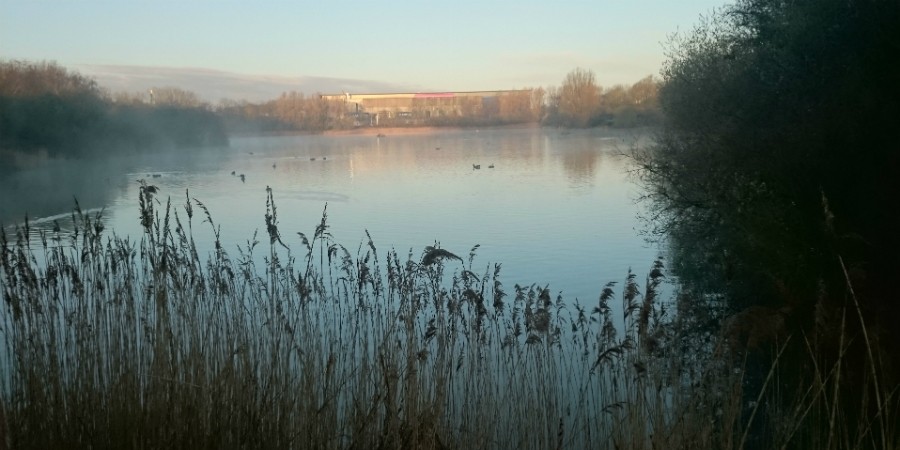 Whilst I looked around the lake I realised I was the only one there, which makes me appreciate how special little moments like this really are. As the mist slowly evaporated, I stood there knowing that nobody else was there to enjoy it and if I hadn’t taken a photo, nobody else would have even known it happened.

Many fisherman will have cherished the same feeling when they’ve been on the bank especially at dawn or dusk. Dawn at a lake feels like a completely different world, the orange glow of the sun is yet to wake the birds, the constant droning noises you are so used to hearing are all gone, just the occasional rustle of a breeze going through the trees or the crunch of the grass underfoot, it is hard to reflect in words exactly what it is like.

The only way to truly appreciate this magical time it is to go and experience it yourself.

Fishing to me is one of the rare activities that can make you feel completely removed from the hustle and bustle of modern day life. I have often fished little rivers out in the middle of nowhere where you can truly escape from everything, I can go all day without seeing or hearing from another person, there is just you, the place you are fishing and if you are lucky some fish who you can fool into getting caught.

The second moment that really made me realise how important the little things are was a little later on the same morning. I was sat next to a tree and I could hear little splashes so I looked over for what was responsible, hoping it was a fish, but to my surprise I saw a flash of blue as a kingfisher came back up to its perch on the branch with a little fish in its mouth. I sat there immersed in this unique wonder and watched him studying the fish before diving down twice more, until he’d caught his fill and darted off in a blur of orange and blue.

Most people may have seen a kingfisher in a book, a photo or on TV, but to sit there and watch it diving down to catch its breakfast was an amazing experience. I probably won’t ever see that again in my life, but those couple of minutes reminded me what fishing is all about, it’s not all about catching fish. It’s those little moments enjoying nature and the world around us that so many people never stop and appreciate, I didn’t catch any fish that day, I probably should have got some tips from the kingfisher, but I thoroughly enjoyed it nonetheless.

Read the latest blogs and news in our fishing section

Jake joined the Trust in July 2015 as part of the Marketing & Communications team. He first went fishing aged 11 and has been hooked ever since. Jake will be telling you some stories from the bank as well as some helpful hints to hopefully pass on some of what he has learned over the years.