The Hertford Union or Duckett’s Canal was dug by Sir George Duckett in 1830 as a short cut from Regent's Canal to the Lee Navigation in East London.

Favourite fish species: roach. They are both magical and mystical. Sometimes easy and sometimes difficult but often obliging in the winter months.

Greatest angling achievement: There are two. First was teaching my five year old grandson to fish. He is now 21 and has caught perch to 4lb. 2ozs and carp to 32.1\2 lbs. From the age of 11 he could also cast a fly very well. He was born an angler.

The second was to create a lake in my garden. It has matured very well and has given a lot of pleasure, as well as good fish, to my fishing friends and myself.

Angling ambition: to improve the barbel population In my local River Mole.

Angling hero: Joe Woodard - a magician with a roach pole on the river Lea. Regarded as London’s champion roach angler. In1872 he was chosen to fish three matches against William Bailey of Nottingham. Woodard, using his roach pole, won. I would have loved to have sat behind Joe Woodard for a day.

"I often dream of going back on a Saturday afternoon in the autumn."

The intention behind the Hertford Union was to save narrowboats and barges the journey down Regent's Canal to the Thames and back up the Lee on their journey to Hertford. Sadly it was a commercial failure and was acquired by the Regent's Canal Company in 1857. 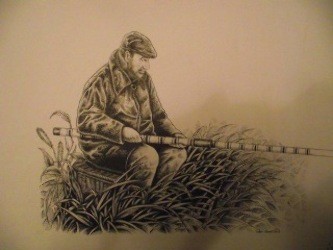 My favourite peg was on the stretch between Old Ford Road and Gunmakers Lane. The towpath was a cinder track held back by wooden boards. The opposite bank consisted of old Victorian factories and timber wharves. Half way along the stretch, at the bottom of a factory wall, was a long bank of reeds. Reeds were not very common along the Ducketts, so to fish opposite them gave a country feel in the heart of East London and many happy Saturday afternoons were spent in this swim.

My chosen method was the London roach pole, five joints of cane tipped with whalebone. Always two pound breaking strain line and a crowquill float attached top and bottom. My weight was a coil of lead wire running freely on the line stopped by a dust shot, twelve inches from a size sixteen hook.

My bait was orange coloured chrysalis and hempseed was my groundbait, fished over depth and laid on the bottom. The line was tightened back to the pole tip and the float sat nicely cocked, its orange tip just showing. Bites started with a ring of water around the quill and then it slid away in a very positive manner. Eight good goer roach were often the reward for a four hour session, with the occasional rudd or perch putting in an appearance .

That was fifty three years ago when I was a fishing-mad sixteen year old. I often dream of going back on a Saturday afternoon in the autumn but I fear the roach are no longer there, so I will just keep the memory of happy Saturday afternoons “down the cut”.