These small fish are only found in clean, stony waters and around the brick work at canal locks. Read more about the Bullhead (Cottus gobio). 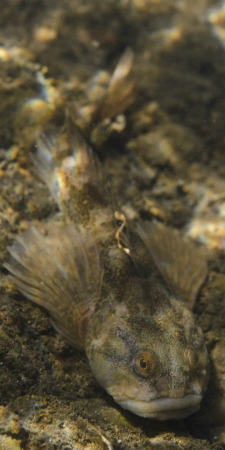 Bullheads are sometimes referred to as 'Millers Thumb'. They are very rarely caught by anglers, hiding away during the day and only coming out at night to feed.

They are quite unusual as they build a small nest of stones and lay their yellow eggs on the underneath of the stones.

Appearance: They are very distinctive, being sandy brown in colour with dark spotting on the large pectoral fins which can look like strips. They have a large, flattened head and big eyes positioned on the top of the head.