John Ellis takes a nostalgic look back at his time fishing in the Fens.

Paul Wilkanowski River Lark at Prickwillow with a Fenland thirty

Following graduation and after a year or two in academia working on grass carp and eels under the likes of Dr John Eaton and Miran Aprahamian, I was lucky enough to land my first full time fisheries post in the Great Ouse catchment.

The fisheries I ended up working on in the Fens were ones I had only read ever previously about in the angling press. As a boy I had dreamed of fishing the Ely Ouse, the Relief Channel, Wissey, Lark, Little Ouse, Old West River, Cam, Pophams Eau, Old Nene, Middle level, Sixteen Foot, Forty Foot and Hundred Foot plus numerous other drains, dykes, leams and lodes that I had read about. Growing up, my angling hero Ivan Marks seemed to have won a match on every one of them. 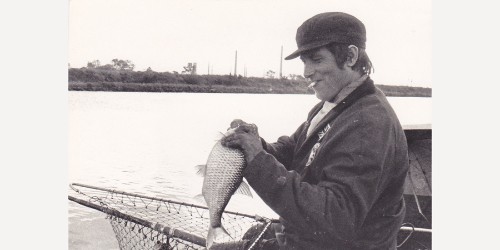 My new career did not start off at all well. Ted Proctor, a no-nonsense practical man, was given the task of mentoring me. Immediately realising I was useless, he told me so in blunt language that would today definitely not make it past the Trust's profanity checker. However, after a while he started teaching me the ropes.

Worse was to follow. Within weeks, I’d written off the fisheries team’s landrover and trailer on the A10 between Littleport and Kings Lynn. The trailer had snaked and both rolled 360 degrees into the flood bank. I ended up perched on the edge of Ten Mile Bank; death the probable outcome if I had plunged into that deep, cold water. Miraculously, I walked away unharmed. There remains, it is said, a slight indent in the flood bank to this day. Not long after that another small mishap occurred. I had failed to check there was sufficient oxygen available in the cylinder and faced something of a PR disaster when the local press witnessed numerous fish carcasses in the delivery tank. Thank goodness there was no social media back then.

Another close shave was getting stuck for several hours on one cold, dark, frosty January evening somewhere between Denver Sluice and Kings Lynn. I had been assured by my boss that the water depth in the estuary was sufficient to permit passage of our fisheries trawling boat at all states of the tide. Alas, this turned out to be a totally inaccurate assessment.

Although only 20 metres from the safety of the bank, I didn’t want to risk venturing out into the mud. Eventually I was rescued unharmed, much to the relief of my line manager who was probably dreading the paperwork associated with a permanently missing member of staff. Talking of trawling boats, setting a trawl is a bit of an art and in one of my early attempts I nearly decapitated myself whilst colleague Paul Wilkanowski almost ended up with a hernia following a lengthy bout of laughter at my expense. 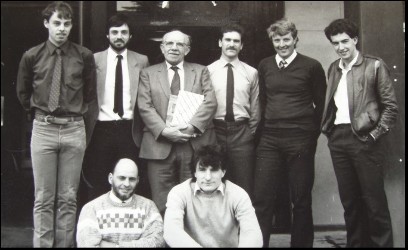 Flock on the loose

The Anglian fisheries team in those days was a mixture of top academics and practical experts. In the former camp were Dave Jordan, Nigel Tomlinson, Martin Stark, Tony Owen, Pat Noble and Dave Woods. In the latter camp were Paul Wilkanowski, Simon Bateman and Gareth Bates, amongst others. My immediate boss was John Adams. In his later years he successfully headed up the Anglian navigation team. John lived in the remote and quaintly named village of Prickwillow and grazed sheep on the flood bank of the River Lark. I suspect that this was more of a hobby rather than for any significant financial return. On one occasion, the whole flock escaped spreading themselves out of several miles of flat fen. We spent at least two days successfully rounding them up, an activity which I suspect was not formally reported to senior management.

On one occasion in around 1986, there was a massive pollution on the River Lark as a result of sugar emanating from Bury St Edmonds. Hundreds of thousands of fish succumbed, but we worked for over 48 hours without a break to rescue several tonnes of roach, bream, and eels which had swum in front of the pollution slug. I think I am correct in recalling the river even being piled at the confluence with the Ely Ouse to hold the pollution back. It was around 3am in the morning and almost two days without sleep when I got nabbed on the way home for clocking 55 mph in a 30 mph zone. Fortunately the two boys in blue who pulled me up turned out to be keen anglers. They were aware from the TV news of the work the fisheries team had done in rescuing so many fish and they decided to kindly let me off with a mild rebuke. I am not sure that would happen today.

Headed by fellow Liverpool fisheries graduate, Ron Linfield, Anglian led the way in the development of quantitative fish population survey techniques on the fisheries in East Anglia The data was first rate, but expensive to collect. One particular winter, the temperatures fell to below zero for weeks on end and fisheries management work was frozen off. During that time I commenced collecting a long term dataset of match fishing results for the catchment. During that time, I read every weekly column written by the great M A Kausman in the Huntingdon Post from1946 onwards. It was better than mending torn nets in sub-zero temperatures and later I followed it up with data from the Cambridge, Kings Lynn, March and Bury St Edmonds papers. It was a fascinating dataset and it has reminded me to find out if anyone continued the work following my eventual departure to what was then British Waterways Board in 1988.

Fishing in the Fens

Talking of match fishing results, I joined several clubs and fished, initially with mediocre results, at club level. Eventually, in 1986, I settled on a target of trying to win the points cup in the club angler section of Cambridge Fish Preservation & Angling Society. I was helped out a lot by an up and coming fellow Anglian Water employee by the name of Tom Legge.

Tom was by then representing the society at Division 1 National level. More by luck that skill I somehow pipped Tom at the next peg by a couple of ounces on the opening match of the series on the Burwell Lode. With some steady results on subsequent matches on the Cam, all I needed to do was to weigh in on the final match in the series to fulfil my ambition. Alas, three days before the event, I broke my leg playing football. There was no way I could physically fish and the dream was gone. I learned to fish the stick float on the Cam and the Lees Brook, near Huntingdon. Three anglers who I had particular pleasure in watching and admiring were Alan Moden, Billy Hughes and Percy Anderson for they were all true masters of the Cam. 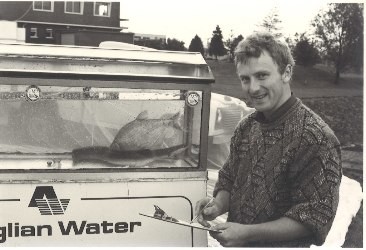 On one occasion, the team were invited to an event at Sandringham, home of the owner of the nation’s sturgeons. It was not exactly a sophisticated display, as the picture clearly shows. We were booked in for two days but when I arrived early on the second morning, the eel had gone missing without trace. I have often wondered whether Her Majesty or maybe the corgis ever came across that slimy escapologist on one of their early morning walks. If she ever did, I am confident that she would not have been amused.