Remembering the 2005 Division One National

It’s been sixteen years since the top division of most iconic event in the match fishing calendar was last held on the Grand Union. The 2021 Division One National promises to be the most unpredictable in years. We’ve seen Maver Milton Keynes go from catching zero to team winning heroes in the space of a fortnight and Daiwa Dorking emerge as possible favourites. In this article we look back to the 2005 Division one event.

The Grand Union as a national venue

Construction on the Grand Union started in 1793, the year of canal mania.  The canal was built to connect the Thames near London with the growing second city of Birmingham. On the fishing front, it was 1984 when the canal was first used as a national championship venue when the Division two event was held on the outskirts of the capital. Lancastrian raiders Southport, whose team included the young Barry Thomas, took the honours in that Division Two event.

Subsequently, various lengths of the Grand Union mainline in Buckinghamshire and Northamptonshire were used by the National Federation of Anglers (NFA). The north west based Highfield squad won the 1992 Division Three event based around Milton Keynes and the canal was used again in 1995 (Division 2), 1996 (Division 4), 1998 (Division 3), 2001 (Division 2), 2002 (Division 4) and 2006 (Division 2). Prior to 2021, the only occasion the venue hosted the top division was back in 2005. In this article we look back at some of the highlights of that occasion.

The EA had warned the NFA in advance that there would be rod licence checks on the day. The NFA sensibly insisted that all competitors produced their rod licence at the draw to avoid any angst later on. One member of a northern based team kicked off at event organiser Ken Ball when he could not produce his licence, much to the chagrin of his team captain. ‘I do have one, the angler pleaded, but my brother has borrowed it today to save him the cost of buying one himself.’ A quick dash to the post office ensured that competitor didn’t end up missing out on his fishing that day.

Thus 68 team of 12, that’s 816 anglers all hoping that it would be their day, lined the towpath. In the days of weight nationals there were many examples of the individual winner being part of the winning team. If you want to know more, it’s all recorded in John Essex’ epic National Championship book. It’s been a much less common occurrence since the change to points back in 1972. On the last occasion it was done, it was a Steve Gardener / Dorking double act. 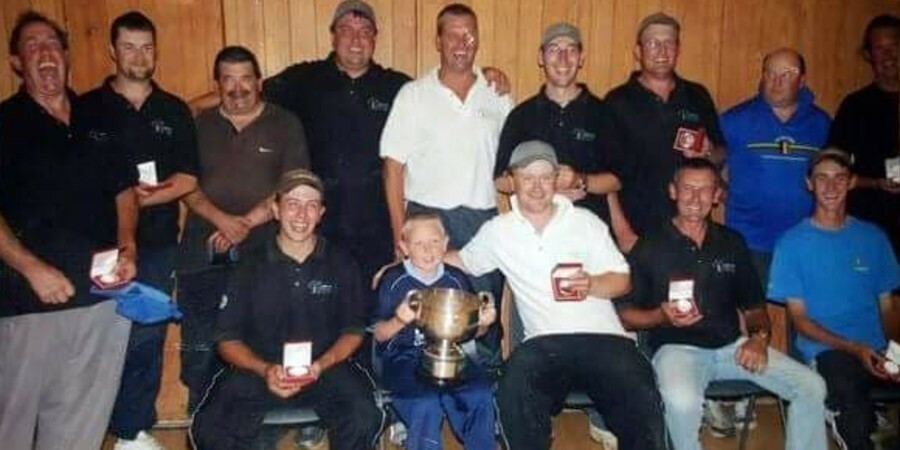 In 2005, Simon Fry of Starlets AS was the top individual with 10kgs 880g of bream, followed by Howard Kaye of Lincoln who put 9ks 100g on the scales and Simon Keiffer of Eastleigh with 7 kgs 490g, with Ludlow’s Michael Keene, a traveling companion of Let’s Fish! coach Simon Mottram in fourth spot just a few grams behind. With Simon’s section winning points getting them off to cracking start, Starlets AS, coached by local match angler Martin Greene, won the team event with 633 points.

The runners up were Shimano Tipton Van Den Eynde (608 points) whose team featured Paul Turner. The Wolverhampton legend has two division one teams silvers to his name but the gold medal still eludes him. As I keep reminding him, there will be future opportunities. The ever-consistent Browning Hot Rods took the bronze medals with 598 points. You can find the full results by scrolling down to the end of this article.

Founded by the late Ken Aske, and often captained by Mark Downes when not away on international duty, the team is considered by many to be part of match fishing big three along with Barnsley & Dorking. Starlets have had their share of national glory and some near misses. Following their win on the Grand Union they achieved further victories on the Huntspill & King Sedgemoor in 2008 and on the Trent in 2010. Outright victory had eluded them since them although Ed Warren took the individual title at the 2017 event on the Shropshire Union. Will the 2021 national see Starlets return to the rostrum again? I would not put it past them.