Nearly 120 keen young anglers lined the banks of the Shropshire Union Canal at the national celebration 2021. One of the most focused youngsters on the day was 13 year old Marco, who was taking part in his first celebration event. Brought to you by Mum Karla, this is the story of Marco’s fishing journey to date.

Marco was born in Birmingham 2008. From the age of two, he loved looking at the fish in the supermarket! When he was three, he went on holiday to Alcudia with his mum and dad. The hotel was situated on a dock and Marco rapidly spotted men fishing. Every day he'd ask to 'watch the men fish'. One man in particular, a Greek man, Boullant, let Marco have a go at fishing and from that moment Marco was hooked!

Marco fished every day on holiday. At the end of the holiday, Boullant gave Marco his fishing rod to bring home but as it was November, Marco didn't get to try fishing for a few months.

The following spring, Marco went with his dad to the local river and spent the day fishing. We then found local stillwater fisheries to take Marco to visit. Marco's maternal grandmother bought Marco a subscription to a coarse fishing magazine, every edition of which Marco read eagerly.

Whilst still only four years old, Marco caught a chub in our local river, the River Cole, which weighed around 4lb. We sent a photo of his catch to the magazine and amazingly he won first prize which was £500 worth of fishing equipment. He was over the moon! Marco has fished regularly ever since and every school holidays, spends a whole day fishing with me and sometimes his little sister comes along too. 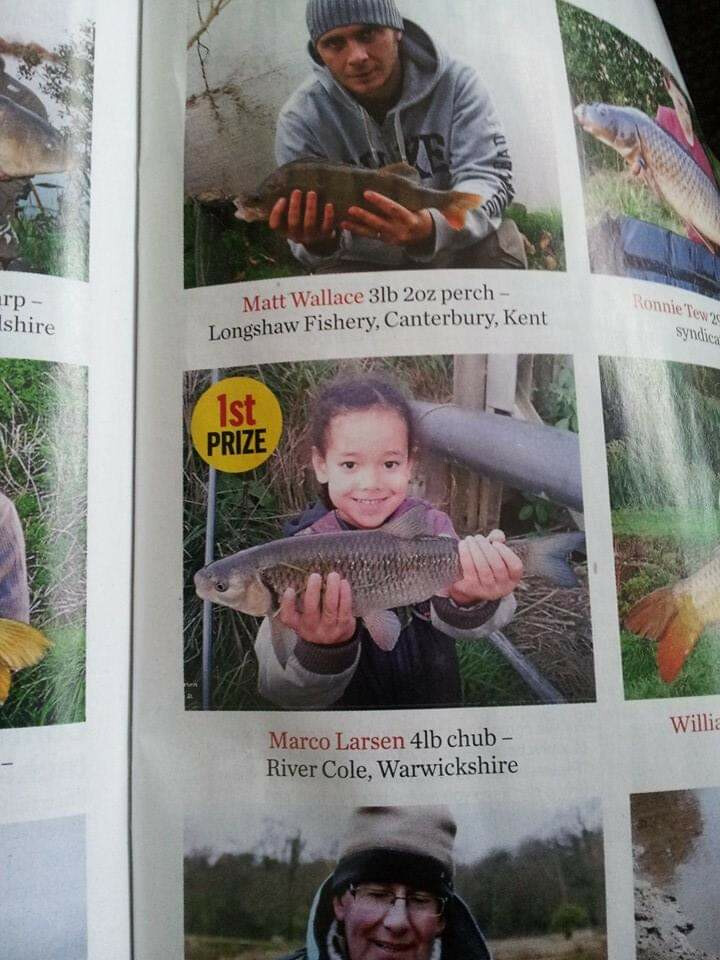 We saw a post on Facebook promoting an event called the National Celebration of Young People Fishing and so decided to book on as it would be a new and hopefully exciting experience. I drove him from our home in Coleshill, North Warwickshire to the Shropshire Union Canal arriving a good 90 minutes before the fishing was due to start. Thank goodness we did as Marco was positioned at peg number two which was quite a long walk from the parking area.

We were able to take in the scenic countryside with the Shropshire hills in the distance. The format is that for the first part of the event the participants have to fish close to the towpath bank which is great as it puts everyone on an equal footing. Not everyone has access to long poles that cost many hundreds if not thousands of pounds.

The rod Marco decided to use on the day was given to him by my friend's dad. He knew Marco was a keen angler and wanted the rod he'd bought as a 15 year old boy to go to good use. That rod is more than 50 years old! Marco chose to bring that rod as he loves using that particular one and treasures it as it is so old. Marco thinks it must hold so many memories of fish caught using it over the years.

One of the Let’s Fish! coaches suggested to change to a smaller hook, which Marco did. The whistle sounded at noon and an early gudgeon secured Marco’s prize mug. Roach and perch soon followed, all caught close in using the rod and line. Thanks to consistent loose feeding as advised by the helpful Let’s Fish! coaches, Marco had a great day and remained fully engrossed for the full four hours. At one stage, the event commentator John Ellis was crouched behind Marco, making copious notes. Focusing intently, Marco caught lots of fish steadily throughout the day, weighing in one kilo one hundred grams and ending up in around 40th position out of 120.

Back at the Cheswardine village headquarters, you could have knocked us down with a feather when Marco’s name was read out as the winner (jointly with Cyrus Solgy) for the trophy presented to the most promising junior angler. This was a wonderful achievement and it made me one proud mum, capping off a wonderful day out. 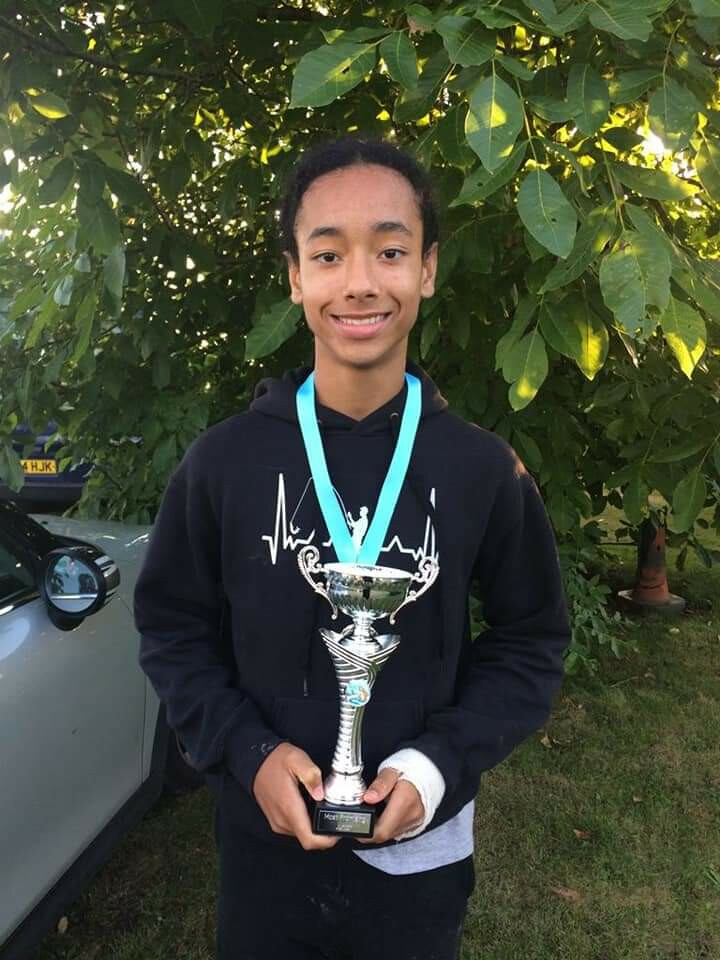 To quote Marco ‘I find fishing fun and the adrenaline rush when I hook and then land a fish. I fish regularly at Packington Fisheries which is quite local to me. My mum takes me to different fisheries whenever we are able to. I've even got some of my friends interested in fishing! Being outdoors and in the fresh air is great and finally catching a fish after sitting there patiently is a wonderful feeling.

Marco really wants to try sea fishing in 2022. We booked a trip in North Wales but it was cancelled just as we arrived because of the weather, it was so disappointing. There is also the national celebration of young people and fishing to look forward to as well as some Commonwealth Games Communities participation events in the West Midlands and elsewhere. Hopefully, there will be team of three representing the Jamaican community at the national Commonwealth Communities Celebrations in October 22. 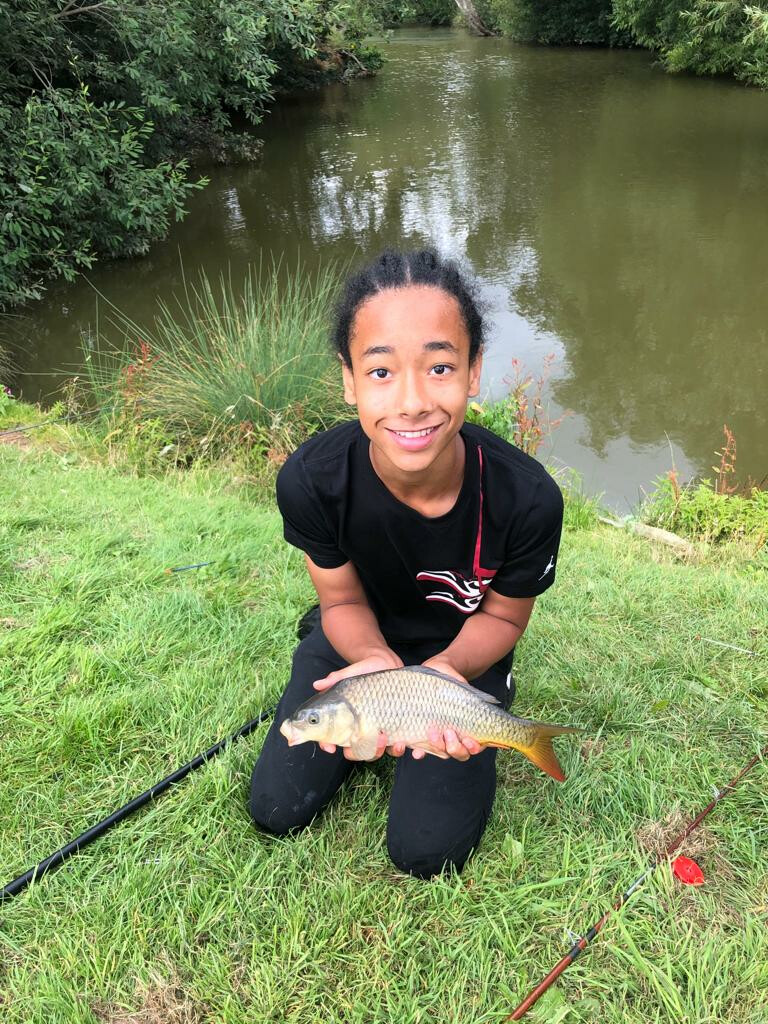 Fingers crossed that Marco is in the running to be considered for that opportunity. We are all looking forward to more fishing adventures this year and hopefully finally getting to go sea fishing. If you are from a non-fishing family and want to try it out for free, you can book on to one of the hundreds of introductory Let's Fish! events held up and down the country from the Easter holidays onwards.