The surname Downes is a famous one in the angling world. Whilst not related to the England manager, could young James Downes one day become a household name in the fishing world? James' mum takes up the story of his fishing journey to date.

The challenges of getting into fishing

James had wanted to go fishing since he was in primary school, but we just didn’t know where to start. Where could we go to fish? What equipment would James need to start out with and where was the best place to buy it from? What do you do with the different items of equipment if we bought them? If we caught a fish, would we know how to take the hook out safely? Time passed by and the dream of starting fishing as a hobby was still sitting firmly in the ‘too difficult’ category. 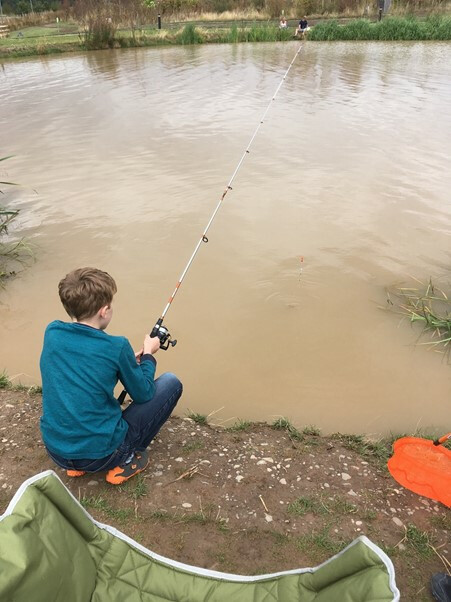 On one occasion, we were camping at a site that had a fishing pond. Birthday money in hand, James went to buy a rod and some pellets, to supplement his crabbing net and a small bucket. Sat amongst the 'professionals' the aim was to catch one of the little fish he has seen day after day.

Within five minutes, he had the catch of the day, a beast of a fish. When the fish was hooked, sheer panic set in realising that it wouldn’t even fit in his net. We shouted for help and a kind gentleman ran over, netted it for us and unhooked it. James’ smirking said, “I think I need a bigger net next time”.

We came home and the rod went into the cupboard for another day, but that day never seemed to arrive. James was nervous that if he ever went fishing on his own, he could hook a sizable fish and wouldn’t know how to land it. Having no fishing experience, I wasn’t able to help him either. We were stuck. 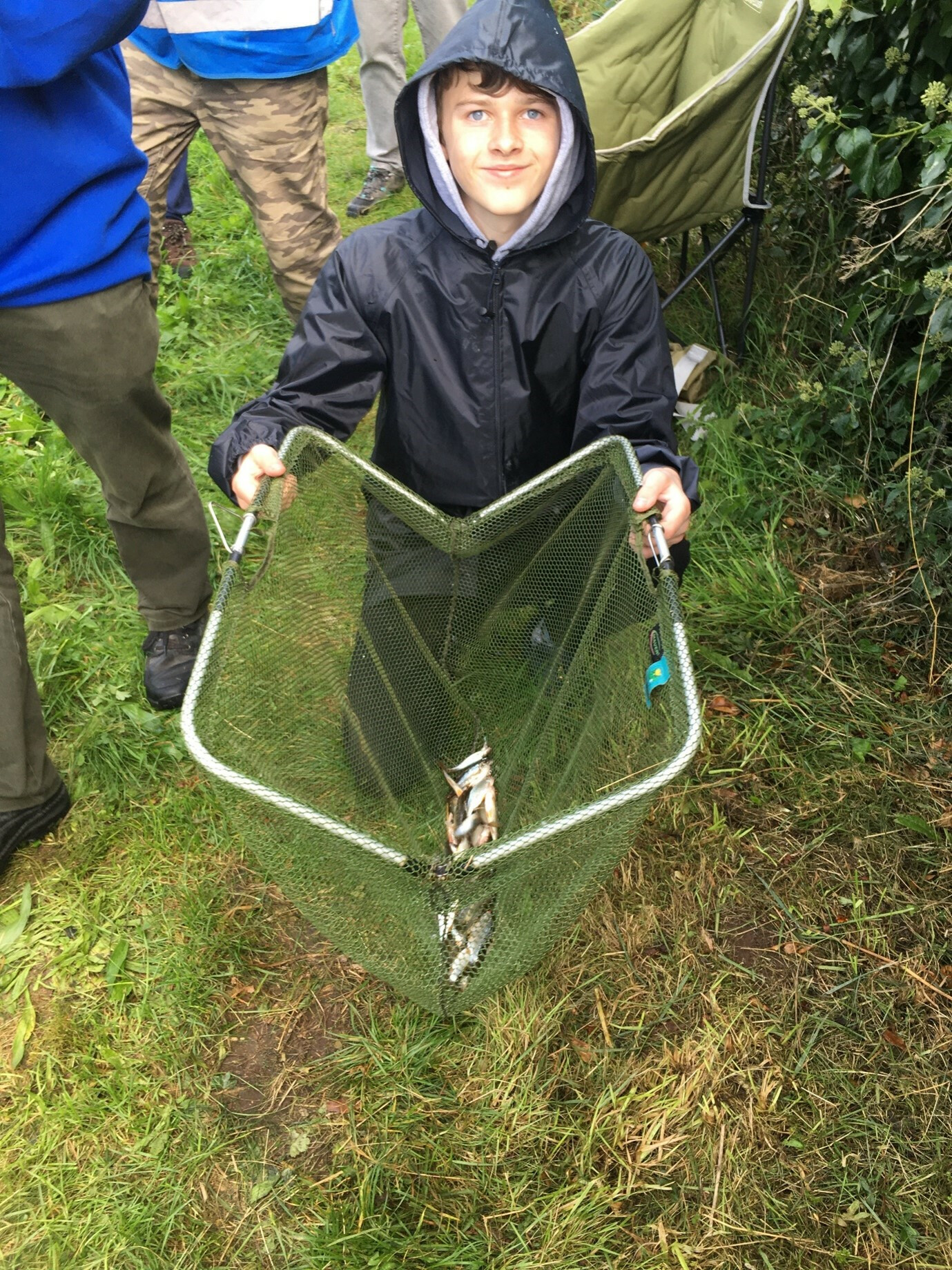 Let’s Fish to the rescue

Out of the blue, we found and booked on to a local Let’s Fish introductory event to be held on the Shropshire Union Canal in Chester. James was so excited to have the chance to take part and learn about what to do. He was worried that because of his ADHD, he wouldn’t be able to concentrate and would probably be told off for not listening.

I too was a little apprehensive for him, but I certainly needn’t have been. The coach was so friendly and informative, James loved every minute and when the time was up, didn’t want to leave. He had sat fully focused for nearly an hour even though the fishing has been quite challenging on that day. Undeterred, that afternoon he signed up for a further four Lets Fish sessions in the local area.

New additions to the vocabulary

He talked about pinkies, polarised sunglasses, disgorgers, and elasticated poles for hours, saying he wanted to join a fishing club and go back out fishing as soon as he could. Over the next few months his personal confidence and fishing skills grew and he attended more Let’s Fish events, including a two hour development session with his goal to be able to attend the national celebration of young people and fishing event later in the summer. The patience and knowledge of the Let’s Fish coaches enabled him to fish confidently with the pole, strike and unhook fish independently. Encouraged by the coaches, James duly signed up to the celebration.

James was immensely excited to be around like-minded young people.  He was overjoyed to be selected for the Port Sunlight Lifebuoy team alongside Gareth Ellis and Amelia Gudger Jackson. He wore his new Port Sunlight team hoody with pride as we set off bright and early on national celebration day, held in rural North Shropshire. This was his first big national participation event, and he was to fish at peg number 11, with nearly 120 others for company spaced out over a mile and a half of towpath. Some of the kids were quite experienced, others, probably the majority were like us, taking part for the first time. 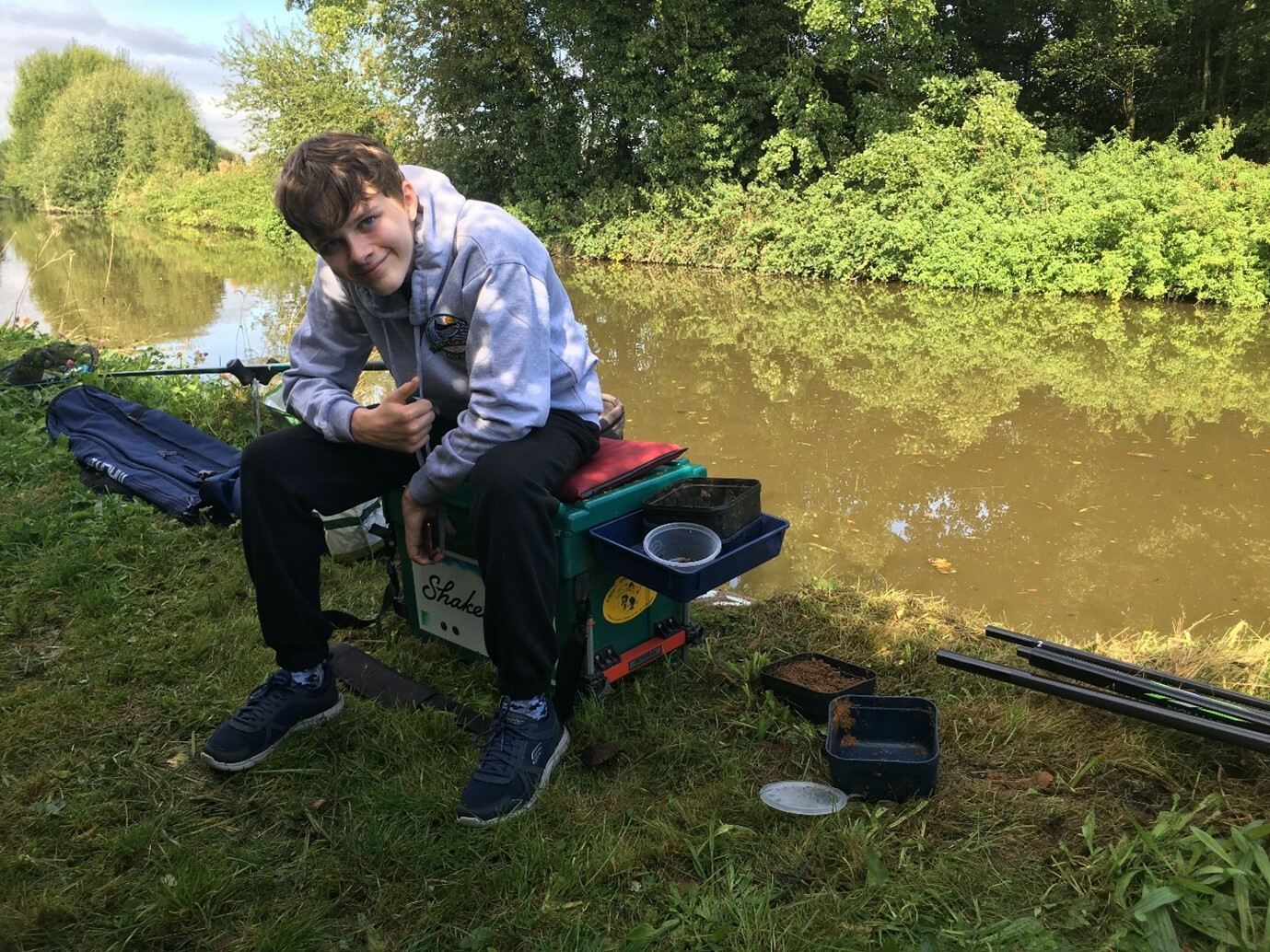 The weather was mixed but the support from Mark Parry, who supplied his tackle and Neil Turner, the Let’s Fish technical coach on his section made his experience a very positive and enjoyable one. He said he had never concentrated on one thing for this long in his life, four hours of fishing and sitting still in one place.

If I had not have been there and seen it with my own eyes, I perhaps might not have believed it myself. He had never heard of a gudgeon until that day but catching one quite quickly meant his gudgeon mug prize was secure and the dreaded dry net avoided. Forty fish later James was naming the different species of fish left right and centre.  He was confidently taking the fish off the hook and putting them into his keep net. He was so animated and listened intently to Neil’s instructions and advice to the letter.

Planning for the future

New gudgeon mug in hand, he started making a list of what new equipment he needed and with Marks help, we got enough to get us up and running for the time being. His younger brother, who also has ADHD, has now started attending the Let’s Fish events and I have signed myself up so I can help them and we can all go together as a family when the weather picks up.  We have also joined Port Sunlight Angling Club, whose members very kindly donated James his tackle.

We plan to get out on the water’s edge over the Easter holidays and make it a regular family activity. Without the support over the last year of the Let’s fish team and their brilliant coaches, James would not have been able to move forward with his ambitions. Its lovely that he feels at ease working in partnership with the coaches. The highlight of the whole year will again be the national celebration.

I do hope there is another gudgeon mug on offer, then I can acquire James old one or maybe, if he is feeling generous, he will present my with it in lieu of payment for Mum's taxi service!