Sheffield has always been a fishing city, perhaps even the fishing city of England? In this article we look back to Angling in the City of Steel, in the 1950’s.

Angling in the City of Steel, Sheffield

One of Sheffield's MPs, Anthony Mundella, introduced the close season for coarse fishing in 1878. The two big city associations both won national championships prior to WW2. I was lucky enough to pick up a 1959/60 Sheffield & District Anglers Association club membership card recently. These old club membership books always make fascinating reading. They remind us of how some things have dramatically changed in both our sport and society more generally, whilst others have defied old father time.

Was fishing just too cheap?

Annual membership back then cost just 2/6, that’s 12.5 pence in old money and just a shilling (5 pence) for junior anglers. Accounting for inflation, that equates to £3 in today’s money for adult membership. In hindsight, fishing at these prices didn’t do the sport any long- term favours. Clubs never built-up financial resources in the glory years and just like Sheffield DAA itself, ended up going out of business.

There was no shortage of tackle retail outlets in Sheffield in the 1950’s No fewer than 27 tackle shops placed adverts, all locally based and there may have been others who chose not to advertise. Ernest Stamford and Billy Clarke’s each had three branches with, Middleton’s, Harman’s and Bennetts supporting two branches; the latter growing to become a famous mail order retailer.

Competition for the angling pound must have been fierce. Several traders offered credit terms. Others claimed the widest selection of wicker baskets, umbrella’s, rods & reels, fresh maggots daily or the availability of squatts to order, a must for bream anglers in that era. Grocock’s even ran a fishery complex over at Barton-on-Humber which they were promoting as a match fishing venue. 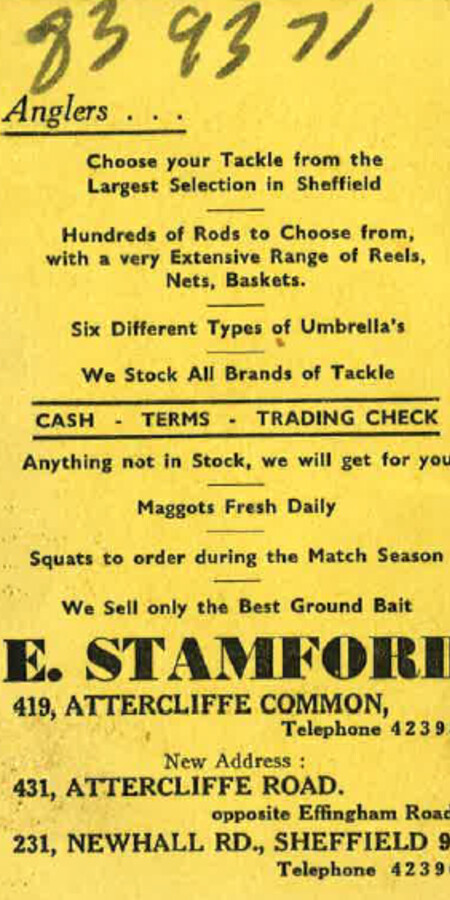 The quantity of fishing available to members was amazing. Canal anglers were well catered for. Twelve miles of Dearne & Dove including its various branches were on the books. Most of this non-Trust owed waterway is unfishable these days. The association rented a similar length Stockwith & Chesterfield Canal (now known as the Chesterfield Canal) and had access to the Stainforth & Keadby Canal as part of Stainforth & Keadby Joint Canal Committee. Many of the other wide Yorkshire navigations such as the Sheffield & South Yorkshire Navigations with its interactions with the River Don would not have held fish stocks at this time.

Because many of the more local waters such as the River Don were still polluted and fishless, this was still the era of the travelling angler. A Sheffield book gave members access to the Trent, the Witham, the Middle Level Drain, Old Nene, Popham’s Eau, Sixteen Foot, The Forty Foot, Old Bedford, Counterwash Drain and North Level. That’s plenty to be getting on with.

Few would have owned a family car in the 1950’s for this was the era of coach and railway travel. As you can see in the advert opposite, Emmanuel Jeffcock Coaches offered all year-round travel targeted at the angler. Sunday was the traditional fishing day and  early starts were the norm. The book even lists the timetable for early morning tram and bus services to the city centre on a Sunday morning. 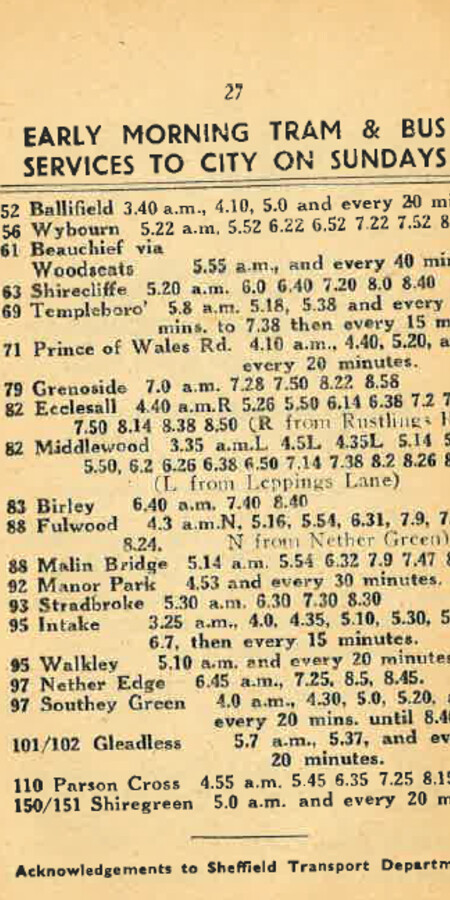 Membership ran from 1 June which is when fishing opened on waters in the Yorkshire Fishery Board area. In Yorkshire the season ended on 27 February whereas in the rest of the country the season ran from June 16 through to March 14 of the following year.

To have been a committee man in that era had a special sort of status. Many clubs had contested elections, just so successful candidates could have the privilege of serving the angling community.  Interestingly, the Consultative movement was strong in that era with the Association listing Yorkshire Ouse, Great Ouse, Nene, Witham, Trent & Lincolnshire and ACA delegates. The national body for these groups, the National Association of Fisheries & Angling Consultatives, eventually became part of Angling Trust in 2009.

The Association’s committee was split into sub-committees of waters, railway, finance, membership cards, weights and scales and other business. Affiliated clubs could hire out scales at 7.5p per day with a £1 deposit. There were fines imposed for loss of weights, which implies the association were using beam scales.

Amongst some of the more interesting club rules were the prohibition the use of bank lines, trimmers, otters, crosslines, snaring, snatching, shooting, spearing, trailing and the dragging of nets, other than the use of a landing net which all today appear in the Salmon & Freshwater Fisheries Act (1975). The committee would also have to deal with various disciplinary issues including an unusual case of the theft of fruit. 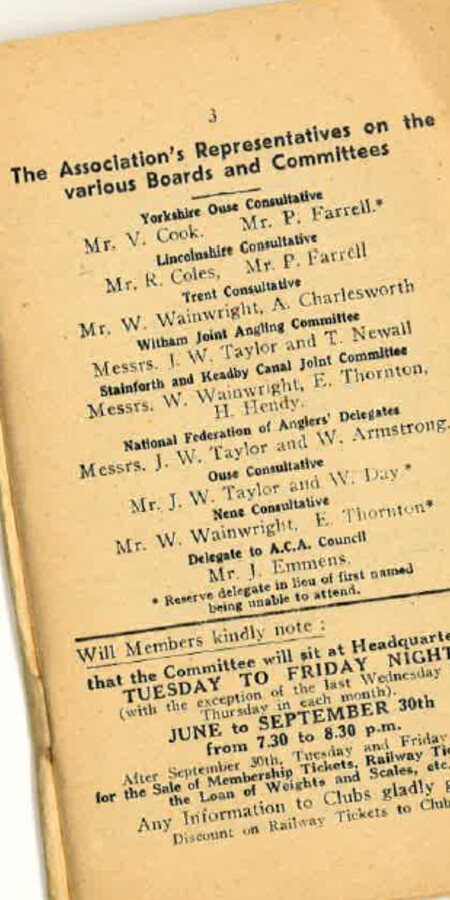 Occasional inappropriate behaviour from anglers is nothing new. Page 21 reports Mr Gudgin, director of the Crooked Chimney Apple Farm at Outwell had suffered the theft of over £100 worth of fruit, that’s £2,500 worth in today’s prices. The police had attended site and found a wallet with an angler’s membership card plus his union card so anglers were the most likely culprits, although it could not be proven beyond reasonable doubt. In previous years, an angler from Mansfield had been caught with a bag of apples on the bus and subsequently found guilty of theft at Downham Market court with a £4 fine and a criminal record for his troubles.

As now, match fishing was a serious business back in the 1950’s. Here’s just a selection of the association match rules;

I think it’s fair to say that not many match-men would think of having a fish set up by a taxidermist these days. 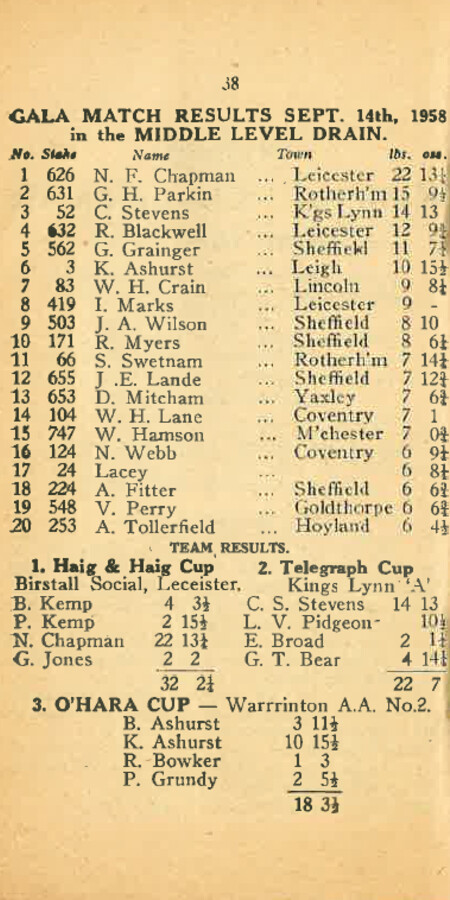 Match of the year

Along with the All England championships, the Sheffield Gala Match was the biggie of the calendar. It was considered by Sheffielders as the outstanding match of the year. In a match with approaching 1000 participants, just winning a section comprising of 50 anglers was no mean achievement. The Haig & Haig Cup was awarded to the winning team of four on weight As you can see below, the 1958 result features four of the all-time match fishing greats. Kevin Ashurst, Ivan Marks, Billy Lane and Norman Webb all finished in the top twenty.

Back in the early days of winter leagues matches were actually held in the colder months, only kicking off in November. Now we occasionally hear of leagues kicking off in September with anglers still wearing T shirts. Each team could have up to 35 members. These days, some whole  leagues are not that much bigger than that. Back then, weighing in was considered a major achievement but invariably the fancied teams ended up at the top of the league table.

The association held an annual junior match for youngsters under the agree of 16, the 1959 event being held on the Stainforth and Keady Canal. Entry fee was 10 shillings but this included coach transport from the city. In my opinion, they got the rules around help with landing fish spot on.

It says ‘anyone, apart from competitors, caught striking and landing fish, will mean immediate disqualification, an exception to this rule is in giving aid in use of landing net’.  If you have never been fishing but would love to try this most traditional of South Yorkshire pastimes, look out for upcoming Let’s Fish events. If you wanted to, you will even be able to represent Sheffield in the 2022 National Celebration of Young People and Fishing and in the Commonwealth Games come 2022.