An evening with Max Winters

Mention the name of Gloucester and most people would think of its Roman history when it was called Glevum, its cathedral or its rugby union team, not forgetting the Gloucester & Sharpness canal and docks.

But when match anglers from a certain era mention Gloucester, the name of Max Winters springs immediately to mind.

Fisheries on my mind

Fishy thoughts are never far from my mind and Gloucester has association with elvers, sturgeons and lampreys. In my opinion, the two greatest anglers to emerge from Gloucestershire to date are Kim Milsom and Max Winters. I met Max for the first time in around 1982. I drew the next peg but one to him in a close season match on the Exeter Canal with a spare peg in between. I was out of my depth in more ways than one, for the Exeter Canal was much deeper than any canal I had ever seen or fished before. Not unsurprisingly, Max won that match with five bream for around 16 lbs or so, whereas I, more by luck than judgement, managed just a single slab and a bootlace eel for 2 lbs 15 oz. Nearly thirty-five years later I managed to catch up with Max once again and what follows is a resume of our conversation.

Max was born on a smallholding near the horse racing town of Cheltenham during the war years. Max could ride a horse by the age of three and his love affair with equestrianism continues to this day. In those early days horses were still used to plough the fields. The Winters family moved to Launceston in Cornwall when Max was around the age of four. Before long they moved back north to the Forest of Dean and then, when Max was 13, they finally settled in Gloucester. 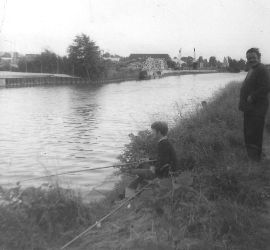 Learning to fish on the canal network

Max’s name can be added to that long list of greatest anglers who learnt to fish and hone their skills as youngsters on the canal network. There is a lesson here for any aspiring match fishing youngster in that mastery of natural venues is a prerequisite to becoming a top match angler.

In Max’s case, he won the Gloucester Junior Canal Championship in 1956 and triumphed again on the same venue in 1958. The 1963 NFA National was held on the Gloucester & Sharpness and Max recalls standing behind Roy Sims as he pulled off a famous victory from the milk factory peg This was the very same peg that produced the winner of the 1937 national. Max vividly recalls Roy fishing at just a quarter depth with a rod that had a silver painted tip.

Max has been an observer of the Gloucester & Sharpness fishery for 60 years now. It’s a lesson, if you like, in how fisheries and fishing changes over the years and will certainly do so again.

When Max was growing up in the 1950s, the canal was noted for large numbers of ocean going craft and the water was always heavily coloured. Columnaris, a bacterial disease of roach, decimated their stocks at one time. For a spell, gudgeon were the target species in matches. There was also a period when tiny eels around the 2 oz mark were a major target species too. In the late 1960s, Max was at the forefront of targeting chub with wasp grub, winning one open with 14 lbs 10 oz with an all chub catch.

Today, of course, the bream fishing on the Gloucester is first rate. Max reminded me that the fishing was not always as prolific as it is today. He recalls once winning an 80 pegger with just 5 oz 12 drams, made up mostly of small fish caught on the drop. 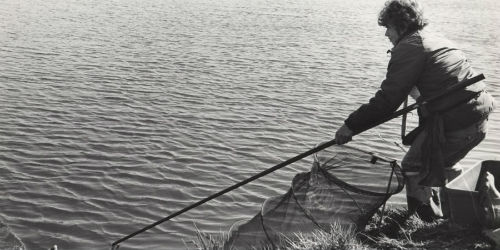 One of the proudest moments of Max’s angling career was being asked by Clive Smith to join the BAA national team. At its peak, the Association had 60,000 members and in theory any club member could nominate themselves by sending in their match record, but virtually nobody ever did.

After representing Gloucester United in nationals from 1966 to 1971, Max made his debut for the mighty BAA in 1973. The BAA team went on to win the match, both in 1975 and again in 1976 on the Trent, the first time back-to-back wins had been achieved in national history. More recently, Dorking repeated this remarkable feat, albeit in matches with fewer teams. In 1975 the BAA team line up was Clive Smith, Ken Smith, Tony Reece, Ken Giles, John Toulson, Max Winters, Kevin Ashurst, Paul Evans, Mark Downes, Ted Farmer, Barry Brookes and Tony Scott. In the 1976 match there was only a single change with Lloyd Davies coming into the side to replace Ted Farmer.

Crowds of spectators at the national

As sweet as national victories were, Max particularly recalled the atmosphere that throngs of spectators brought to the fishing. Max recalls getting off the coach on that 1976 Trent National:

“The steward told me he could see my peg some hundreds of yards away, Intrigued, I wondered how he knew and as I approached my peg the answer was apparent. Over 100 spectators were already in position, for they knew that a member of the BAA team had drawn that number."

Isn’t it a shame that, in comparison, you see relatively few spectators on nationals these days? Max went on to represent BAA in the 1977, 1978 and 1979 nationals. After Clive Smith and Ken Giles, Max was the third angler to be sponsored by Shakespeare which, in due course, led to the formation of the Shakespeare super team. 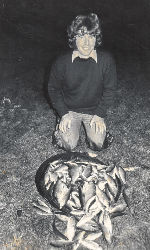 Competing with and against the greats

The greatest compliment Max felt he was ever paid came at the end of that 1975 Nene National. Max drew a section on the upper river and caught 38 fish for 1 lb 12 oz. When Kevin Ashurst returned to the East of England showground headquarters, he asked Clive how it was looking points wise. Clive responded that with 11 anglers now back, the result was just too tight to call. Kevin then said:

“Just tell me it’s Max’s result we are waiting for and we will be ok."

It was indeed the case that Max was the missing angler. He ended up third in his section with that catch which helped clinch the national crown for BAA.

For your peers in the team to have such faith in you was, for Max, more important than any individual match victory. Drawing next peg to top anglers like Clive and big Kev was the ultimate exciting challenge.

“With guys like these you respected them a lot and feared them a little and I always found that if I drew next to one of the really top anglers it brought out an extra gear”.

Sadly, Clive died of cancer in his early 40s.

With Max’s versatility on a range of natural river, canal and stillwater venues, he was called up by manager Stan Smith in 1981. The world championships that year were held on the Avon at Luddington. The team selected comprised of Clive Smith, Tony Scott, Kevin Ashurst, John Dean and Dave Thomas who became world champions. Max was chosen to be reserve and as was the case in those days, Max fished in the individual event on the second day, coming sixth overall with 1 lb 12 oz. At around that time Max also won one series of the TV series Hooked, famously presented by footballing legend Jack Charlton. 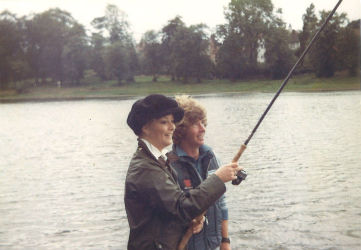 Max revealed what I thought was a fascinating approach to matches. He would estimate what weight he believed would be needed for third spot and approach the peg accordingly. He would be prepared to try a new approach when there was nothing much to lose and occasionally these instinctive hunches came off, sometimes spectacularly so.

Pretending to be Max Winters

Max often liked to fish venues where a good chub catch on the waggler was the order of the day. On one occasion he arranged to stay over with Dickie Carr and fish a match on the Lee Navigation. A young rather rotund fellow competitor came up to Max as he arrived at his peg and asked him who he was. Not unexpectedly, Max responded by introducing himself as Max Winters.

"You can’t be" retorted the rotund angler, "For you are nowhere near tall enough. Everyone knows that Max Winters is a giant of a man."

Max thought no more of it until the end of the match when said angler returned.

"How did you get on then Mr Winters?"

“I might have a pound at most” responded Max, "so I am not bothering to trouble the scales-man."

“See” retorted the rotund angler. "That proves it, I know for certain that you are an imposter, for if you really were Max Winters as you claimed, you would have definitely have won this match!”

Young boy in the crowd

Max admitted to only once feeling real nerve wrenching pressure during a match. In the run up to the Bristol Avon National in 1978, Max had been having a good run on the venue. On a big open held at Claverton just prior to the national itself, the bookmaker had made Max outright favourite to win, at what Max felt were very ungenerous odds of around ten to one. Once the whistle had blown for the start, a young whippersnapper of a lad in his early teens kept approaching Max every few minutes asking him what he had caught. The lad then dashed off down the bank at frantic speed to see what others were catching. After his third or fourth visit, curious as to his motives and sensing an air of nervousness in the boy’s voice, Max asked him why he was so keen to know precisely what he was catching.

Aiming to own the President

The boy then explained that a while ago he had set his heart on owning a top of the range Shakespeare President rod. In those days these retailed at over £100 and that, try as he might, he realised he could never hope to save up that amount of money. Indeed he had only amassed 10% of the sum required after months of harsh frugality.

It turned out the young boy had decided to take a huge financial gamble and bet virtually his entire life savings on Max to win that match. To quote Max:

“Now that was serious pressure, for that boy’s fishing dreams were in my hands.”

Pressure or no pressure, Max duly went on to do his duty. For he did win that match and the boy had enough cash to have been able to buy the fishing rod of his dreams. But it gets better than that, for on hearing the story from the boy back at the HQ, Clive Smith presented his own President 14 foot rod to the lad, Kenny Giles gave him a 13 foot rod and Max gave him a 12 foot rod plus a couple of reels. That was one happy youngster and of course, he still had over £100 of winnings, courtesy of the bookmaker.

As our time together came to an end we both speculated as to whether that young lad is still fishing to this day. If you are that boy and happen to be reading this article, please do get in touch with us.