My favourite peg is in an area called the bay at Ivy Bridge on the Oxford/Grand Union dual length, which I discovered entirely by accident.

Current club, team or sponsor: My current club is called the Tablet Takers who are based in the Coventry/Nuneaton area and are a group of geriatrics just like me.

Angling ambition: to carry on angling as long as I can.

Angling hero: Bob Nudd is my favourite angler. I have great memories of Bob fishing my open matches long before he became a world champion. Bob was always a top angler and was always very open and honest when people asked him for tips or information.

"The lads in the club fish mainly for Carp. I just fish for the silvers, but if a carp happens to like my bait I'm more than willing to catch him. I also fish the odd open contest."

My favourite peg is in an area called the bay at Ivy Bridge on the Oxford/Grand Union dual length which I discovered entirely by accident. Early one Sunday morning I was waiting outside my house to be picked up for a competition by a coach, who never actually arrived. I was spotted by an old gentleman called Jim Morris who lived opposite me and was on his way to go pleasure fishing. To cut a long story short, Jim asked me if I wanted to accompany him and so I ended up in his car and went fishing with him instead to Ivy Bridge. 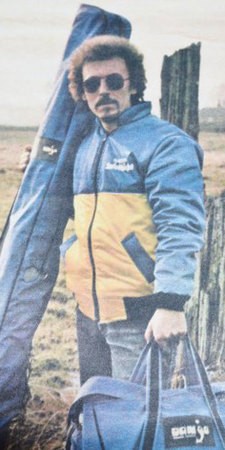 After parking up, we walked through a gap in the hedge, then over a stile to get on to the towpath. Jim fished with the stile behind him and I chose a peg to the right. All through our journey Jim was putting me right about what I should be doing as I had never ever fished a canal before. I heeded the advice he gave me and was soon pulling out quality roach one a chuck.

I was very disappointed when he said that it was time to go home at 11.15am. He told me that he did this every Sunday in order to get back to the Haven Pub for opening time.

I went again with Jim several times, but then started going over on my own or with friends. I rarely ever saw another angler out there in those days. When I discovered the pegs in the bay, the fishing was out of this world.  Great big bream and a never ending stream of roach, it was like being in heaven and all you needed for bait was some casters and hemp or big maggots. I had this place to myself for a long time and used to take my young family out with me so that they could play in the fields or on the towpath whilst I was fishing.

However, I let the cat out of the bag one day when I was in WH Lane's Tackle Shop and showed some pictures of what I had been catching. I don't think that anyone had believed me until they saw the pictures. Trouble was, in no time at all everyman and his dog were going out there fishing and the venue got hammered.

I organised many open matches there over the years but never once managed to draw in the bay. I did draw my favourite peg once in a club contest though and won it!  In the days that I match fished at Ivy Bridge, you could park your car at the bridge or in many other areas where you could drive across the grass fields and right up to the rear of the towpath.

"My ambition is to carry on angling as long as I can. I'm 72 now. I had a break from angling from 1998 until around 2014 where I concentrated on my work and looking after my very sick wife who passed away from lung cancer in 2015."

Having not been out there for about 18 years, I went back recently and was amazed. I found signs on the gates saying,' Private road, No Entry'.  I drove back to the Boathouse Pub and parked there deciding that I would to walk to the bay.

Judging by the vegetation along the way, I doubt that this area sees much angling activity other than the occasional pleasure angler.  It was interesting to see that the Floyd graffiti was still on the broken bridge approaching Ivy Bridge. As I ventured further on I came across areas of permanent and private moorings opposite the towpath which had never been there before, and the bay itself housed a lot of permanent residents.

When I fished out here in the old days, Coventry & District Angling Association leased the rights. Following that, Warwick DAA took over and after that the local Braunston AC rented it for a while. These days the fishing is covered under the Trust's Waterway Wanderers permit and I have just sent off for one. They cost just a tenner for senior citizens and cover you for 12 months from time of purchase.

I understand that the spread of zander has changed the fishing with roach and gudgeon harder to come by as a result.  All the canal fishing that I have done since my return to angling has been in the Barrow upon Soar area where friends live.

I now intend to broaden my horizons  on the canal scene more generally.